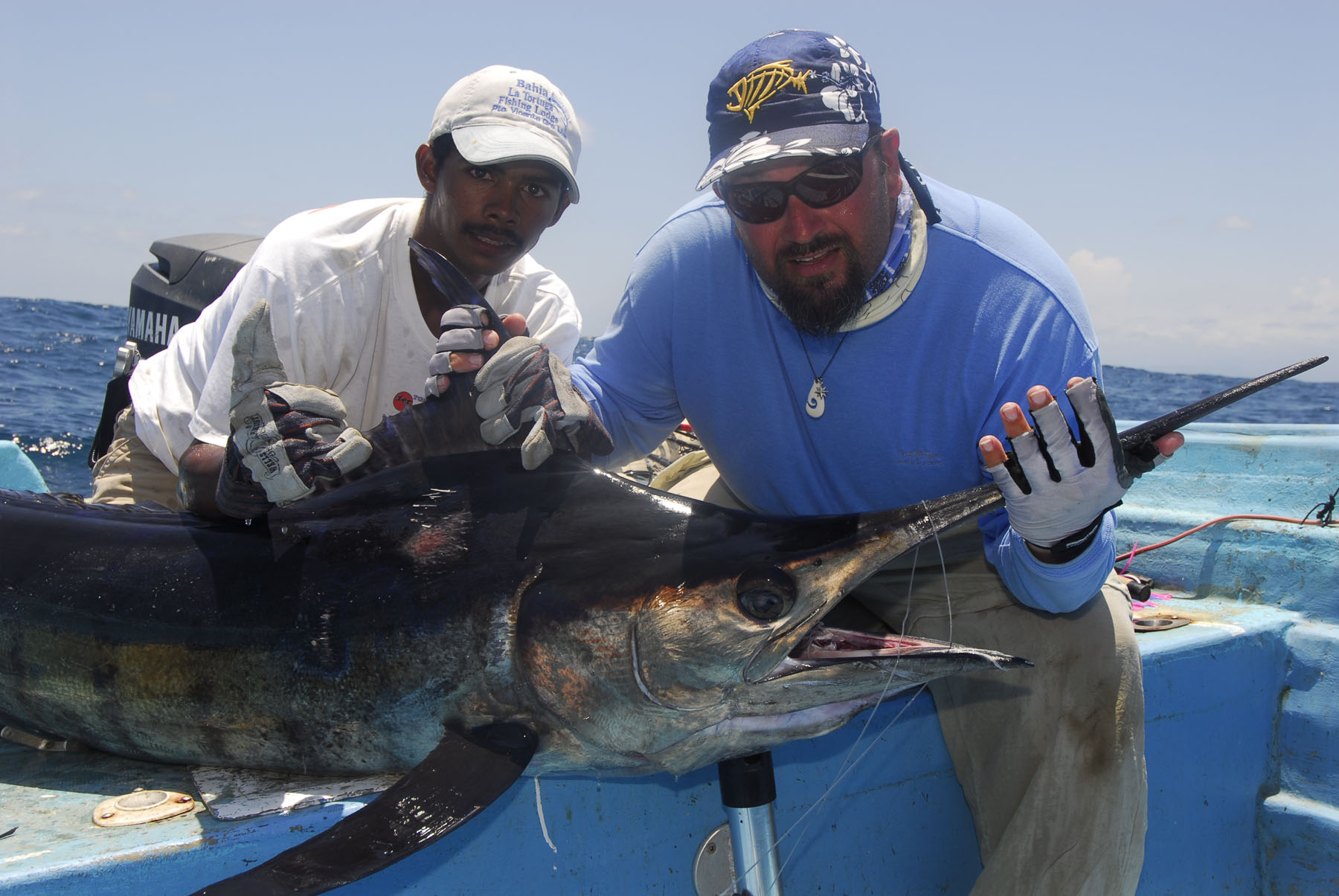 It is the same for me every winter. About mid January, as hunting season is winding down and fishable days are few and far between, I get a very bad case of cabin fever. This past winter was no exception except for the fact that, rather than sit around waiting for the sun to come out, I would go and find it. To do so I contacted my good friend Andy Packmore who runs the Travelin' Angler at Fishing Tackle Unlimited. I explained to him that I needed some sun but had some budget restraints due to the time of year. As it so happens he had just the place for me and turned me on to what has become one of my favorite places to be- Bahia la Tortuga Lodge.

Bahia la Tortuga Lodge is a quaint adobe lodge located on the Pacific Ocean about an hour and half drive south of Ixtapa/Zihuatanejo in the small fishing village of Puerto Vicente. The lodge is owned and operated by John Lorenz who is a native Texan who visited the small town that time forgot nearly 15 years ago. "The first time I fished out of Puerto Vicente I hired one of the local fishermen to take me and was surprised to find that there were no rod and reels on his boat and I had to catch a sailfish on a hand-line," said Lorenz. "I fell in love with the place and started looking to buy some property."

The same simplicity that captured the heart of Lorenz has apparently had the same effect on me. From the moment I arrived at the lodge I knew I would be back again and again. Oh, and did I mention, I have been back.

For me, part of the allure is fishing from small tiller-steered pangas (boats) for big game. In many ways it is a great deal more challenging to capture a large pelagic fish from a small boat than from a large sportfisher where you fight the fish from a large open cockpit with a mate to assist you. Once you hook up with a large fish from a panga, it is you, the fish and the captain crammed into a very small cockpit area trying to control chaos. And chaos is exactly what I experienced just less than a month ago.

Back in June, I decided to pack up and head down to try to catch some roosterfish on my fly rod. I knew that we were a little early in the season for roosters but it was my only window so I took it. While I did not land one on fly, I did sight-cast to several and had a very exciting follow. I also had the chance to watch my buddy, Jason Wood, land his first rooster ever on conventional tackle which was a pretty exciting event in itself.

After several days of catching numerous skipjack tuna and jacks on fly, but still no rooster, we decided to move offshore for a billfish. Now to put things in perspective, as I alluded to above, this was not my first trip to Bahia la Tortuga and my previous trip with friend and artist Tim Borski resulted in just under a dozen sailfish and one marlin raised and hooked on fly but that is a totally different story in itself. The reason I mention it is because sailfish are much more plentiful in the winter and I normally would rig up a fly rod, but because we were now fishing in June, I opted to give Jason the chance to catch his first billfish on conventional tackle.

We trolled all day with no success and we were about ready to call it a day when our captain, Rodie, started screaming 'Vela' as he pointed back to the bill slashing at one of our baits. (Pez vela is Spanish for sailfish). I then turned to Jason who informed me that he was feeling a little green so I took the rod in hand which I had already thrown into free-spool and prepared to set the hook. Of course when I did, I got a big surprise on the 40-lbs tackle we'd set out for 80 to100-lbs sails. As I drove the hook home I thought I saw a marlin turn and head down to the depths. I quickly informed Rodie of the fish and his eyes widened at the thought of a marlin. Let me tell you, this kiddo gets jacked up when a marlin comes into the baits. Anyway, still unsure of the identity of the fish, I put the screws to him knowing that if it was a marlin I was going to have to put the stick to it and do the damage early in what was sure to be a long fight on the lighter tackle. And, that is exactly what I did.

After a short fight I had the fish, which still had not jumped, coming to the boat. That is when all hell broke loose. The first jump happened just 10-15 feet from the boat and of course confirmed what I had previously suspected- I was doing battle with my first black marlin and it was over 200 lbs. I cannot even begin to tell you how many times this fish jumped but every one of them occurred within 50 feet of the boat which added to the previously mentioned chaos.

Now fast forward about 30 minutes (I am proud to say that I whipped him in about 45 minutes) when we landed the fish. The fish was still somewhat green when Rodie leadered and billed the fish and I calculated the fishes chance of survival should I bring it into the boat for a quick photo or two. I quickly made the call and we brought it in and Jason framed a couple of quick shots of me and then the marlin decided it wanted to be back in the water. In short, words can not describe what it takes for three grown men to get a 200 lbs plus, very irate fish out of a small boat. Once the fish hit the water I grabbed the bill and Rodie put the boat in gear. Moments later the fish made a powerful tail stroke and was gone- no worse for wear, I hope.

Needless to say it was poor judgment on my part to bring the fish into the boat and I am going to have to say that I will never do it again. Beside the fact that it was very dangerous, I know beyond the shadow of a doubt that I would lose many nights sleep over the memory of killing such a magnificent creature.

Now here I am a month detached from that fish and am already planning my next trip. In fact, I am loving it down there so much that I now offer to host fly-fishermen down to catch billfish and roosters on fly. I'm telling you- big game fishing out of a small boat is tough to beat. I fell in love with it and I bet you will too.

Bahia la Tortuga Lodge is an inexpensive destination for anglers on a budget. For more information visit www.escapeixtapa.com or if you are interested in knowing more about fly fishing for billfish you can contact me at my website.