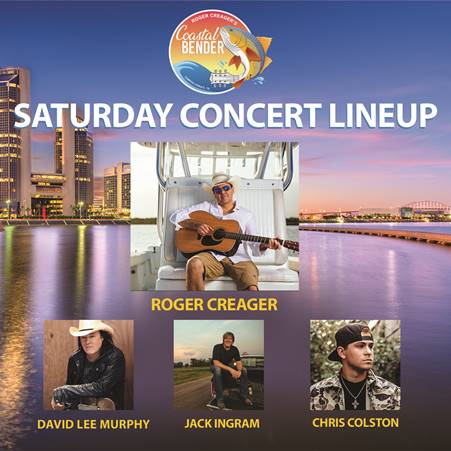 On Saturday, August 3rd enter the coastal cool world of Corpus Christi Texas native, Roger Creager as he headlines the first annual Coastal Bender, a 4-day fishing tournament, outdoor expo and music festival.
Kicking off Saturday’s entertainment is East Texas native, Chris Colston who has recently sent a storm sweeping through the Texas/ Red Dirt scene with the release of his 2018 EP, “Gone.” The title track surpassed a half-million streams on Spotify in just a few short months after its release and with that, Colston set the bar quite high for himself as well as other upcoming artists in the scene.
Up next will be Jack Ingram, the iconoclastic singer-songwriter who has been a part of the music industry for more than 20 years with hit songs such as “Barefoot and Crazy” and “Wherever You Are.” Ingram’s prior work has won him a fiercely devoted fan base as well as reams of critical acclaim with Midnight Motel now marking a creative milestone for the veteran artist. His sound is ever evolving and showcases his expressive, emotionally raw songwriting abilities.
That will lead us to million-selling singer-songwriter David Lee Murphy. Murphy is no stranger to the Country Music scene as his songs have been burning up the charts since 1994, with his hit songs such as “Dust on The Bottle” and “Party Crowd.” He has earned more than a dozen songwriting awards and has written for superstars such as Luke Bryan, Keith Urban, Florida Georgia Line, Thomas Rhett, Eric Church, Brad Paisley and many more.
Closing out Saturday nights performances is the talented Roger Creager. Creager grew up outside of Corpus Christi and has always maintained a love of saltwater. Whether he’s happy, sad, bored, or just in need of inspiration, you can bet this artist will be somewhere breathing sea air. While Creager is an adventurist he never strays far from his small-town South Texas roots and his music encompasses all of him. He puts his life experiences and his infectious high energy and zeal for adventure right back into his songwriting and performances which leaves the audience wanting more.
More information announcing Friday, August 2nd entertainment lineup to follow soon. To purchase tickets or to get information about the concert, tournament, outdoor expo and more visit CoastalBender.com