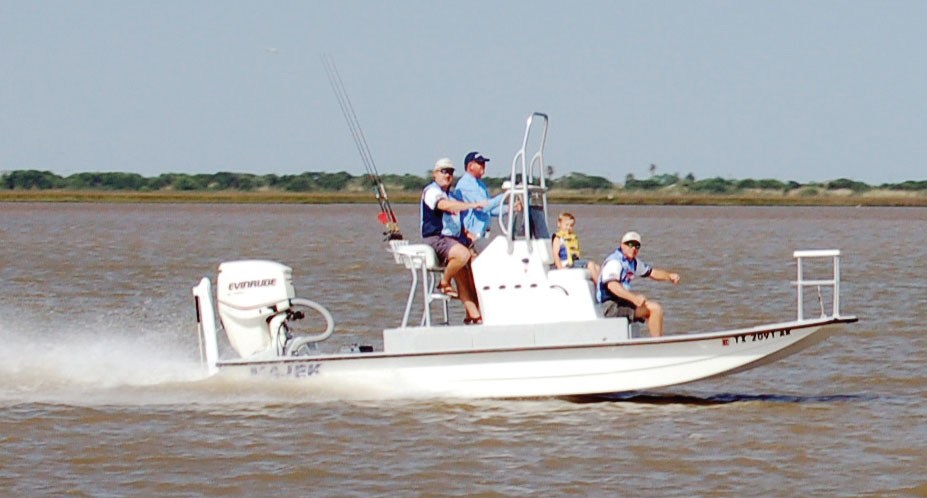 Team TTF to the rescue!
The Texas Redfish Series was coming to Matagorda. Working nights for the last 30 days I was ready to get a few days off work during tournament week. If everything went right I would be able to prefish a few days. Prefishing was definitely in order as the first Redfish Series of the 2008 tour in Corpus did not go well. I went with no prefishing and just hoped we could get two fish to remain competitive in the race for team of the year. How hard can it be to go out and catch two redfish? Well, it was pretty hard; I pulled down a solid zero for the first tournament of the year. Now the series was coming to my backyard.

The days before the tournament were spent prefishing. The wind was howling at 20+ knots each day, but my partner Reid and I had laid out a good game plan. We had two good spots, one East Bay in an area called Little Venice and one in West Bay in an oyster-filled cove. We caught plenty of reds in different areas during prefishing, but these two areas had the fattest fish. Little Venice gave up a 27-inch fish that went 8.25 pounds and in the cove we had an 8-pounder that taped 27-inches. The cove held more fish, but the fish in Little Venice were fatter. We felt pretty good in that both areas gave up 14 pounds in the very limited time we fished them.

Tournament morning the wind laid, the tides were the week’s highest and a front was coming in. We headed out to implement our game plan. We’d hit the cove in West, hit another bank with oysters, hit a small oyster filled lake, and with 2 hours left to go we’d head to Little Venice over in East Bay.

We shutdown the Illusion about 300 yards short of the cove and started trolling the bank. Reid starts with a woodpecker color She Dog (CRRW) throwing at the marsh edge and I throw a Texas Rigged Killer Flats Minnow (SA Mullet) out deeper on the scatter shell. Three minutes after starting fishing, at exactly 0658, Reid’s topwater is engulfed by a 6.5 pounder. First fish in the box and most teams are still running.

Then at 0705, Reid gets hit again with a twin to the first red and we have 13 pounds in the box and we are not even at our spot. Right then, another boat heads right into our cove. They must have found the same fish. We continue down the bank and catch several smaller fish. By this time I have swapped to topwater as the fish are near the grass edge and are aggressive. The boat that came into the cove is also catching fish.

The other boat did not do anything against the rules, but I am somewhat frustrated about them going where we were trolling. The boat also motored over the fish that were lying out deeper. Oh well, that’s just part of the game. We have 13 pounds and all day to upgrade.

We work the area with the other boat and continue catching fish. Suddenly, Reid hooks a big fish. Once in the boat, the red measures out at 29” and back she goes. We fish in our cove until 1000. Time to go check the shell lined bank. Heading to it and turning the corner, there is a boat right on the area we found fish, so we decide to go to the oyster filled lake. While in the lake, the front hits and the wind begins to howl. Quickly shifting gears, we decide to fish oyster reefs on protected shorelines.

In our home waters, we know areas with oyster pads and protected shores and thus our game plan has turned to “run and gun.” We hit the first area and catch a small red. Due to the dirty water, we are using popping corks rigged with TTF Killer Shrimp. At the next spot, I get a good fish and hopefully an upgrade, but it is another oversize fish.

one upgrade fish that adds .25 lbs and another that is oversize. By 1230 the north wind and falling tide have water leaving the bay quickly. We decide to head east to Little Venice before it drains. On the way, we spot birds hovering over pods of reds on the bank, but the best out of the bunch is 24-inches and no upgrades.

We head back towards the Colorado River, but notice the tide has really fallen. Thinking Little Venice is now too shallow to fish, we decide to finish out the day in West Bay and head back to our cove. The boat immediately drifts and stops on a shell pad, as there is too little water to fish. It is about 1400 so we can go in for our 1530 weigh-in or make one quick stop to try for an upgrade.