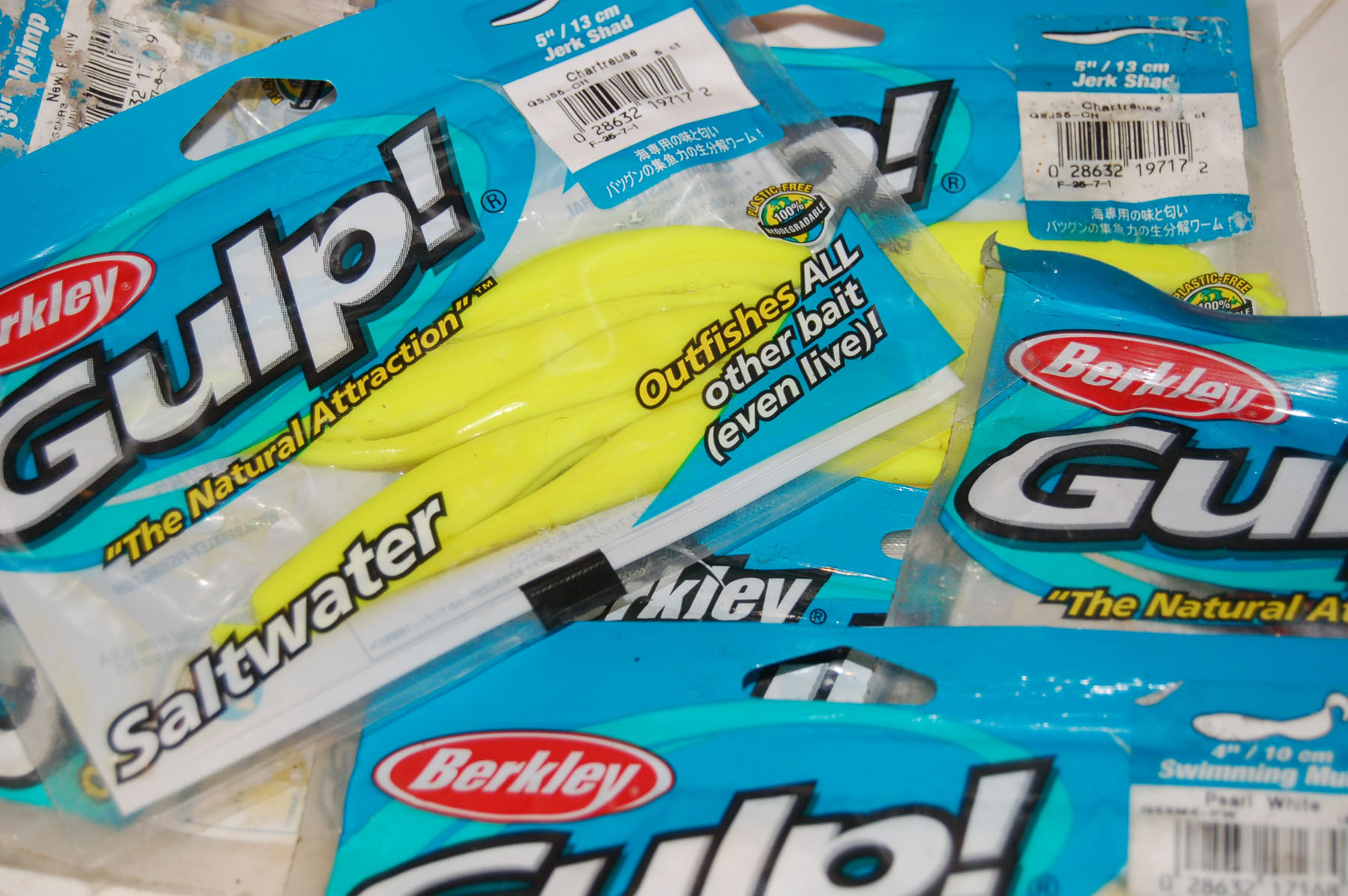 A variety of Gulp! can never be a bad thing to have on hand.
Unless you have been living under a rock the last couple of years, every tournament angler knows what Gulp! is. It has been cussed and discussed as not being real artificial bait by aficionados and it has been described as a lifesaver for some teams that can't seem to get finicky fish to bite. Love it or hate it, the bottom line is Gulp! is an extremely effective bait that can catch fish when all else fails. If you are going to be competing in tournaments, Gulp! better be one of your standard tools in your fish catching toolbox.

I used to be in the "that stuff can't be that much better than regular artificials" group of fishermen. The theory was based on the belief that I could make an artificial bait look or act real enough to draw a strike, so long as there were fish around. That theory lasted right until my first redfish tournament in Florida.

Punta Gorda is well-known as a fishing Mecca on Florida's west coast. The redfish that inhabit the gin clear waters of Punta Gorda are used to extensive fishing pressure, chumming and live-baiting, and as such have near constant lockjaw. As the story goes, "just catch your two redfish and be happy."

Fishing around keys in Pine Island Sound, we found several schools of redfish hunkered down, safe in the outstretched arms of thick mangrove trees. The mangroves overhang the water to the waters surface; creating a safe and impenetrable habitat that eats lures with abandon. The mangroves' overhang can be up to 20 feet in some places creating perfect areas for large schools of fish to reside undisturbed. The tiny key we trolled around happened to have plenty dead mangroves that allowed glimpses into the fertile zone we desired to fish. The dead mangroves were a result of Hurricane Charlie that devastated the area two years before.

Spotting the redfish was easy as they thought they were hidden under the bare branches of the dead mangroves. Getting baits to them wasn't easy as my skill at skipping baits is lacking. In fact, skipping is a technique I've added to the list of things to master for 2008.

I was throwing a Killer Flats Minnow in the color they call boneyard shrimp which had already drawn a few strikes, but mostly in blind-casting situations. The fish I'd been sight-casting to were not interested in my offering. My better half (no, not my wife, but my partner Reid) was throwing a 4" Gulp! shrimp in new penny color. As we continued trolling around the key, a school of 30 reds came cruising down the bank toward and around our boat. The school never really spooked, and I was able to get several good casts with not even a sniff from the school of spottails. Reid on the other hand cast out about 5 yards and just let his shrimp sit on the bottom. One red just stopped just short of the Gulp! and went nose down on the bait. The red actually picked up the bait, holding about 1-inch of the tail in its mouth. Holding it several seconds, as if to make sure it was really something he wanted to eat, the fish stroked its gills and the bait disappeared in its mouth. Fish on! That red ended up just under 27" (Florida has a 27" limit) and was the perfect tournament fish.

I could not believe it; that fish should have spit that bait, but it didn't and that scene echoes in my head to this day. The ingredients in Gulp! may not be publicized, but what ever it is, it works. Of course that night and over a hundred dollars later at Wal-Mart, I had my first stockpile of Gulp!

There are plenty of different Gulp! colors, shapes and sizes. But before we get to that, I want to discuss some of the techniques that have worked well for me during tournaments.

First, is dead-sticking. This has to be one of the most boring and unexciting ways to fish, but it works. I'd heard of dead-sticking, mainly from Florida anglers, but I would not have believed it worked until I tried it in Punta Gorda. The day of our tournament, we Power Poled down where we could just reach the edges of the mangrove trees on our now favorite key. I put a 2" Gulp! peeler crab on a jighead and cast to the edge where our school was hiding. Fishing it like dead bait on bottom, I was stunned when I felt the tap, tap, tap on my second cast. Bingo, instant redfish. We went on the rest of that morning dead-sticking the edge of the mangroves and caught several reds, the largest of which was a rather disappointing 24-inches. Anytime you're facing finicky fish, just put it out there and let it sit. Rig a Gulp! peeler crab or shrimp on a jig (weedless or standard) and go to town.

A method that works great in off-color water is rigging a Gulp! under a rattle cork. In this application I typically use a pearl white Gulp! shrimp on a circle hook. The 2" peeler crab is also a great bait with this rig. This setup has paid off numerous times in water with near zero visibility. Normally, making as much noise as possible with the cork gets the fish's attention. As the fish comes over to investigate, the scent will draw a strike. After having fished with circle hooks under a cork for several years now, I am a believer in the circle hook having a lower mortality rate and no gut hooking. The main thing to remember with circle hooks is, don't set the hook. Just tighten the line and it will do its magic. A rattle cork with Gulp! and a circle hook is also a great way to rig your kid's rods. No messing with live bait, and when the kid see the cork go under, all they have to do is reel in.

Gulp! can also be rigged like a standard soft plastic worm on a jighead. A screw-lock jig will hold the bait better than a standard barb-type jighead. The Gulp! jerkbait is a good choice for rigging on a jighead, although it is not quite as flexible as a standard rat-tail soft plastic. Another great choice is a Gulp! swimming minnow that comes with a curly tail and provides good action with just a straight retrieve. One thing to note is the swimming minnow has a short body and it takes a short shank jighead to keep the hook in the body and not get down into the tail section.

Becoming more popular with tournament anglers are spinner baits, and a good choice with spinner baits is using a Gulp! saltwater pogey or swimming shad which both have paddle tails and seem to work better with a spinnerbaits retrieve and weight.

As far as colors go, I personally don't think it matters, but I mainly use pearl white, new penny, molten and chartreuse. Remember, the scent is what matters most.

There is no doubt that Gulp! has revolutionized the tournament scene. It will catch fish when conditions will shut out a normal soft plastic bait. If you have never tried Gulp!, all I can say is you are putting yourself at a huge disadvantage in lots of situations. Gulp! may not be the favorite bait to fish with, but when a team needs two fish and the bite is tough, Gulp! should be one of the first things on the end of the line.