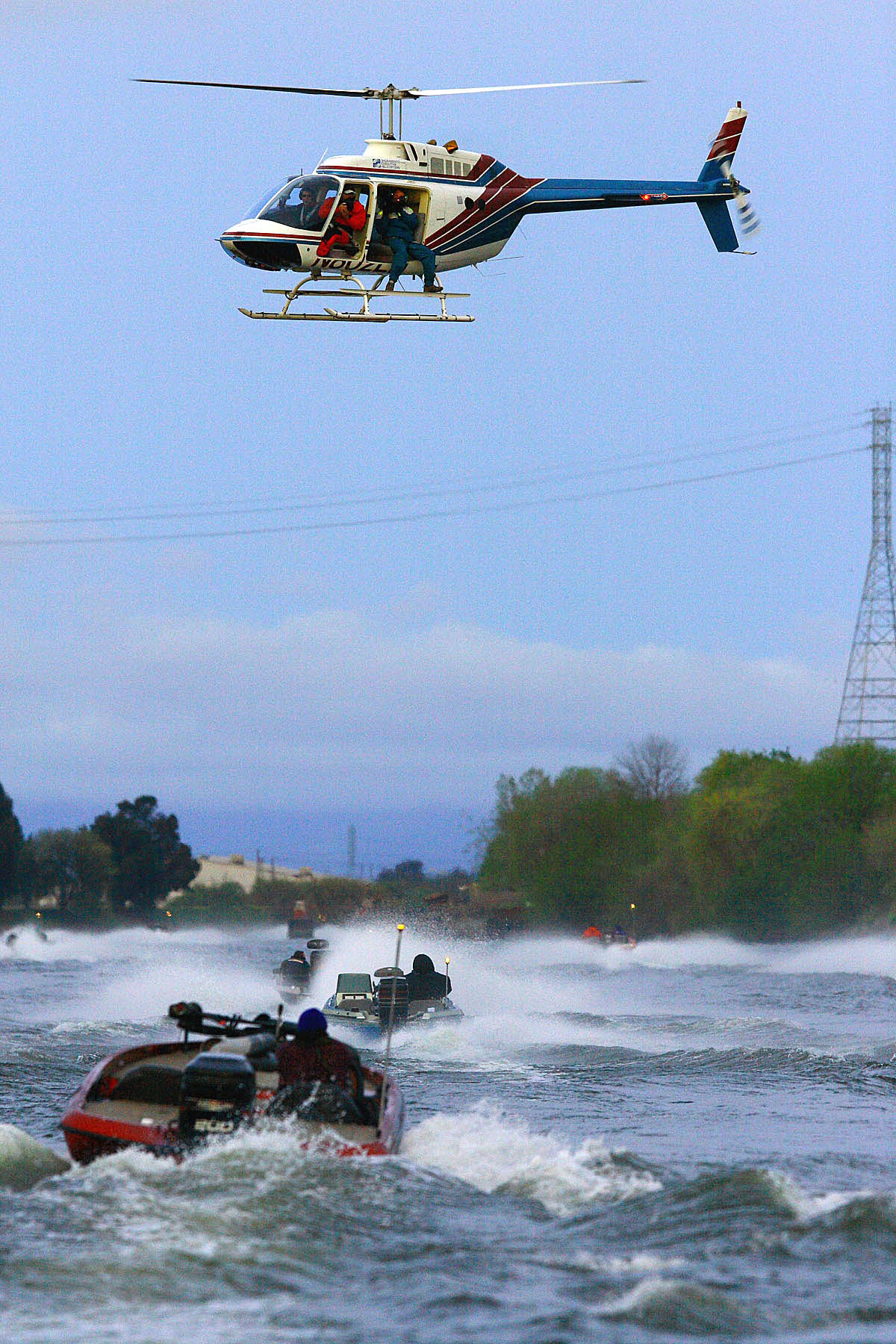 Capturing every aspect of the event is part of the TV production; a helicopter crew films the anglers leaving the harbor.

Not being a full time professional fisherman, we all have to periodically make one of the toughest choices of all, when to and when not to go fishing. Deciding to forego a Saturday on the bay to catch up on chores around the house that have been neglected is something all of us must face.

Part of the morning ritual before tackling the lawn is a quick glance at ESPN to catch last night's scores. Everyone in the house is sleeping, so you might as well watch ESPN and not awaken them with the mower. Your fingers quickly surf to ESPN2 during a commercial and you are suddenly watching professional bass fishing. Four hours later, it hits you, "I have been watching fishing all morning. These guys actually do this for a living. What a life."

Suddenly you are on the phone with your boss telling him off and quitting your job. With the growth of all the new saltwater tournaments, you will be in on the ground floor, touring the coast in search of the biggest redfish or kingfish. Well not to burst your bubble, but lets look at some of the facts surrounding saltwater tournaments and look at how they compare to bass tournaments. Can saltwater tournaments ever grow to the level of professional bass fishing?

Right now there are 2 major redfish tours, the FLW Redfish Tour and the Redfish Cup. There are 4 major kingfish tours, the Southern Kingfish Association (SKA) Mercury Tournament Trail, the SKA Yamaha Pro Tour, the FLW KingfishTour and the FLW Kingfish Series. Compare the pro saltwater tournaments to the pro largemouth bass fishing tournaments. FLW outdoors has 7 different tours dedicated to largemouth bass fishing. The FLW Tour consists of 6 tournaments with $4000 entry fees. There are 200 pros and 200 co-anglers competing. The payout is $10,000 for 50th place and $100,000 for 1st place. FLW Outdoors also has the FLW Series, the Stren Series, the Bass Fishing League and 3 other tours. Bassmasters has 3 tournament series including the Bassmaster Elite series consisting of 11 tournaments with a $100,000 first prize and $5,000 entry fees.

Saltwater tournaments are growing, but there are signs that there may be too much to fast. Last year, the Redfish Cup raised their entry fee to $1000, but the number of tournament participants dropped. The idea of a national tournament trail with higher entry fees and payouts is good for professional anglers, but there are very few redfish teams that can fish full time and afford the cost of fishing from Texas to Florida.

There needs to be a symbiotic relationship between sponsors, anglers and tournaments. The involvement of each needs to grow together and if one lags or grows to fast, the sport will suffer. The Redfish cup went back to an east division - west division format this year and so far, it seems to have helped increase the numbers of anglers entering tournaments.

Meanwhile the IFA Redfish Tour and Texas Redfish Series have made small changes and both seem to be growing. It will take a while and growing pains will occur as saltwater tournaments try to grow to the match the marketing effectiveness and size of professional bass fishing.

In dealing with sponsors, again the freshwater tournament fisherman has the advantage. Due to the large number of freshwater anglers, sponsors see more potential recognition for their products. Spectator turnout at tournament weigh-ins, television coverage, media coverage and people interested in bass fishing is large and established. The Bassmasters Classic is televised live on ESPN and the weigh-in is held in at a large stadium in front of thousands of cheering fans.

Bass fishing is truly a small example of how NASCAR marketing works, building fan loyalty to specific anglers. During bass tournaments, fans follow their favorite anglers around the lake to watch how and where they catch fish. Bass anglers don't mind and in fact talk to and play up to their spectators. Those spectators will purchase the products they represent.

What would redfish anglers think if three boats of cheering fans anchored on the flat they were getting ready to fish? The structure and water depth that redfish frequent does not lend itself to spectators following the anglers. Many of the places people fish for redfish will only take one boat. Shallow water, redfish and multiple boats adds up to spooky fish. How many weekend spectators are going to run 60 miles offshore to watch a team drifting for kingfish? Again, offshore angling does not lend itself to spectator viewing.

For professional saltwater tournament growth to occur, sponsors must continue to join and support the tournaments and the anglers. A sponsor is looking for one thing, return on investment. Sponsors are not giving product and cash to anglers because they think that angler is a good guy or even a good fisherman. Sponsors give product and cash to anglers expecting increased sales.

So can saltwater tournaments reach the same level of popularity as freshwater bass fishing and support the number of full time professional anglers that bass tournaments do? No. I do not think they can. The numbers do not support it, there are just too many freshwater anglers compared to saltwater anglers.

Does that mean professional redfishing or kingfishing can not be a viable sport in which anglers can compete full time? No. The saltwater tournament scene can continue to grow and is growing. The tournaments and more importantly the television coverage must be interesting enough for non-saltwater anglers to be interested.

How fast and when will saltwater tournaments be to the point of full fields of professional teams? I can not answer that question. BASS had its first tournament in 1967 with 106 anglers and now 40 years later has over 600,000 members. Certainly saltwater tournament growth will peak in a shorter period than 40 years. I would say that we should check back in 5 years to see how tournament turnouts are going and how sponsorship is infusing the sport. In other words, you may want to call your boss back about that job you just quit.