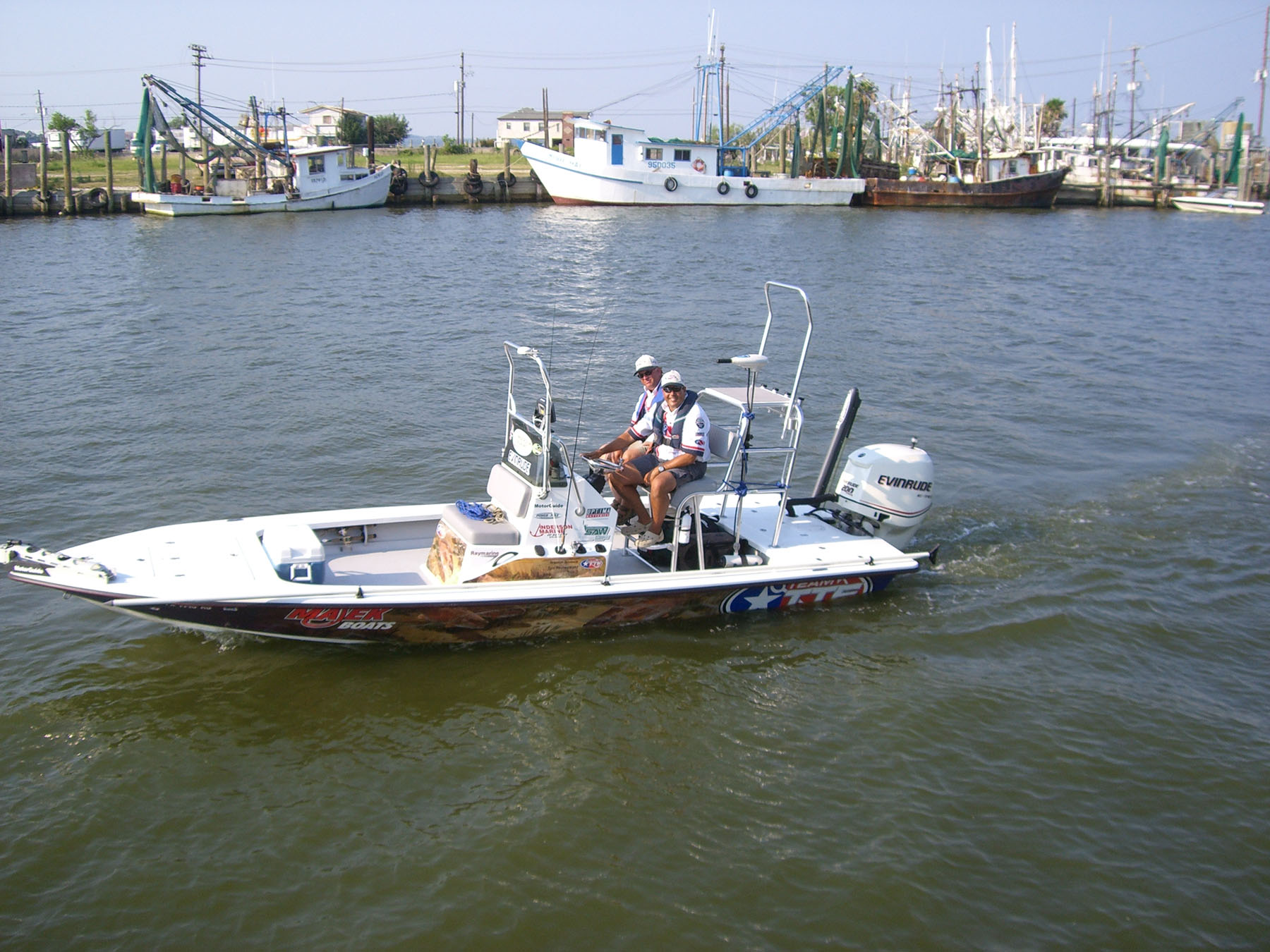 Xtreme in Kemah, Texas. Brandon Jenewein, Reid Westmoreland.
Approaching the large metal building a glimmer of light peeked between its front doors calling us to come and see what lurked inside. As the door slid open we were instantly blinded by bright afternoon sun streaming through open doors on the other end. Squinting, a human form could be seen hunched over a large black object, studying intently and rubbing, as if feeling for a pulse. The figure rose and approached and soon I could make out a man in jeans and t-shirt wearing a protective mask and covered in a mixture of sweat and dust. He extended his hand and greeted us, "Hi, I'm Johnny."

It was January 2006. Reid Westmoreland, my tournament partner, and I were in Corpus Christi at Majek Boat Works and we had come to see a new project Jimmy and Johnny Majek were working on. The large black object Johnny was hunched over was the plug that would produce a new hull mold for what some were already touting to be a perfect redfish tournament boat.

Now unless you understand fiberglass boat building, the term "plug" probably deserves explanation. A plug usually begins as a 100% handcrafted object and is in fact a boat of sorts. Most builders rig the plug as a working prototype with engine and controls to conduct sea trials and further develop and fine tune the planing and handling characteristics of their creations. The inside of a plug is left rough and unfinished, the outside however serves as the object the final mold is formed around. Meticulous care is therefore given to removing every flaw, no matter how tiny, by either filling or blending. This requires hundreds of hours of tedious hand labor with epoxy compounds, rasps, sandpaper and other contouring tools. Johnny Majek is as much an artist as he is a boat builder, and it was the artist's touch he was applying when we opened the door.

Jimmy explained that this project was not in their production shop, but, "down in Area 51," to keep prying eyes from spying the new design and the process that has made Majek Boats so successful. The brothers affectionately refer to it as Skunkworks 22 after the secret engineering facility that produced the famous F-111 stealth fighter. We spent the next hour discussing the new hull as Jimmy and Johnny explained what each detail was designed to deliver.

The plug had already been in the water several times for a series of secret water trials and the brothers were anxious to explain the process by which numerous features had been adjusted and tweaked to deliver the precise level of performance they were seeking. Reid and I, who both work at a nuclear power plant, were appreciative of the amount of thought and engineering that went into it. It was obvious that this new Majek creation was a compilation of many years of shop and on-the-water experience blended with a true desire to build a boat that would excel in its class.

Later in 2006, the new boat emerged from Majek's Area 51 and was christened the Illusion. The Illusion is 22'6" long and quickly became the top seller in the impressive Majek lineup. This year, we got our wish and Kresta's Boats and Motors (www.krestasboats.com) rigged our new Illusion with an Evinrude 200HO for our tournament adventures.

Now as January approaches, people will be anticipating upcoming boat shows and some will be considering a new boat for the 2008 season. Different styles of boats have their own strengths and each can be selected to not only provide tournament transportation, but can be leveraged to provide a competitive advantage as well.

One inevitable question that comes up for those looking to purchase a boat for fishing in Texas is, "Should I get a tunnel hull?" I have personally anguished over this question, using spreadsheets and pro/con worklists to arrive at a decision. There is no easy answer, but a good way to look at the differences and advantages of different types of boats is to discuss the differences between the various models in the Majek lineup.

The Majek Redfish Line reigns as the champion of skinny water with many in this industry. A flat bottom boat will almost always provide the shallowest draft of any other design boat hull. Due to the large area and the water it displaces, a flat bottom design will float shallower than any vee or cat-type hull. The Redfish Line has a large flat bottom with a tunnel that allows it to be operated with the outboard raised into the tunnel, well above the bottom of the boat. The tunnel feeds an incredible plume of water to the outboard's prop and cooling water intakes. Properly equipped, and in the hands of a skilled operator, the Majek Redfish Line is capable of jumping very shallow and planing in mere inches.

The Majek Xtreme is a v-hull design and drafts deeper than the Redfish, however, on the upside, it is a much faster hull and provides a markedly smoother ride in choppy or rough waters. The Xtreme was born during the rapid growth of speckled trout tournaments here in Texas where fast and safe transport along with increased range for wade fishermen has always been a key ingredient in winning.

The Majek Illusion is actually somewhat of a compromise between the Redfish and the Xtreme. While its basic architecture is modified flat and uses the proven tunnel design of the Redfish, it uses softer chines in the development between the bottom and sides of the hull. There is also a slight step outside the tunnel that forms a rail of sorts to prevent sliding when turning. Overall, the wider stance of the Illusion keeps its static and running draft to within a whisker of the fully-flat bottomed Redfish. The step and chine design work in unison to provide more lift, greater speed and turning capability, similar to the Xtreme.

So which boat is best? Think about how you fish and where you fish most of the time. For Reid and me its all about redfish tournaments. Most of my personal boating and tournament experience has been gained in v-hull boats and we have done well in them, but I must say that moving from the Xtreme to the Illusion has opened a lot of water and this plays nicely into the requirement to stay in the boat in so many of the redfish-style events. There is no question that the Illusion's shallower shallow planing and drifting capabilities have allowed us to access areas redfish frequent a large part of the time and our 2007 tourney record bears this out.

Perhaps the single greatest reason we chose the Illusion over the Redfish was the increased cruising speed it offered without the handicap of significantly deeper draft. We also decided to concentrate on learning smaller and shallower areas closer to the various host marinas our tournaments would utilize rather than making long runs to waters we already knew as we did with our Xtreme. This strategy often lends to increased fishing time between take-off and weigh-in and therefore deserves consideration in your overall tournament planning.

For someone that fishes primarily on the upper Texas coast and its larger bays, or perhaps competes more regularly in trout tournaments, the Xtreme could be more suited to your style of fishing. Someone on the lower coast may elect to have the shallow draft of the Redfish Line due to always fishing skinny. One thing is for sure, as boat buying season approaches; spend some time on the water in the type boat you intend to purchase. A boat is a big investment and you should be happy with your purchase. The right boat can make you more competitive or be a hindrance, so take your time and do the research.

If you ever see me on the water and want a test ride, just ask. I am not going to say that a Majek is the brand for everyone, but if you look at tournament finishes in Texas, the Majek brand is frequently seen at the top of the leaderboard. You be the judge.