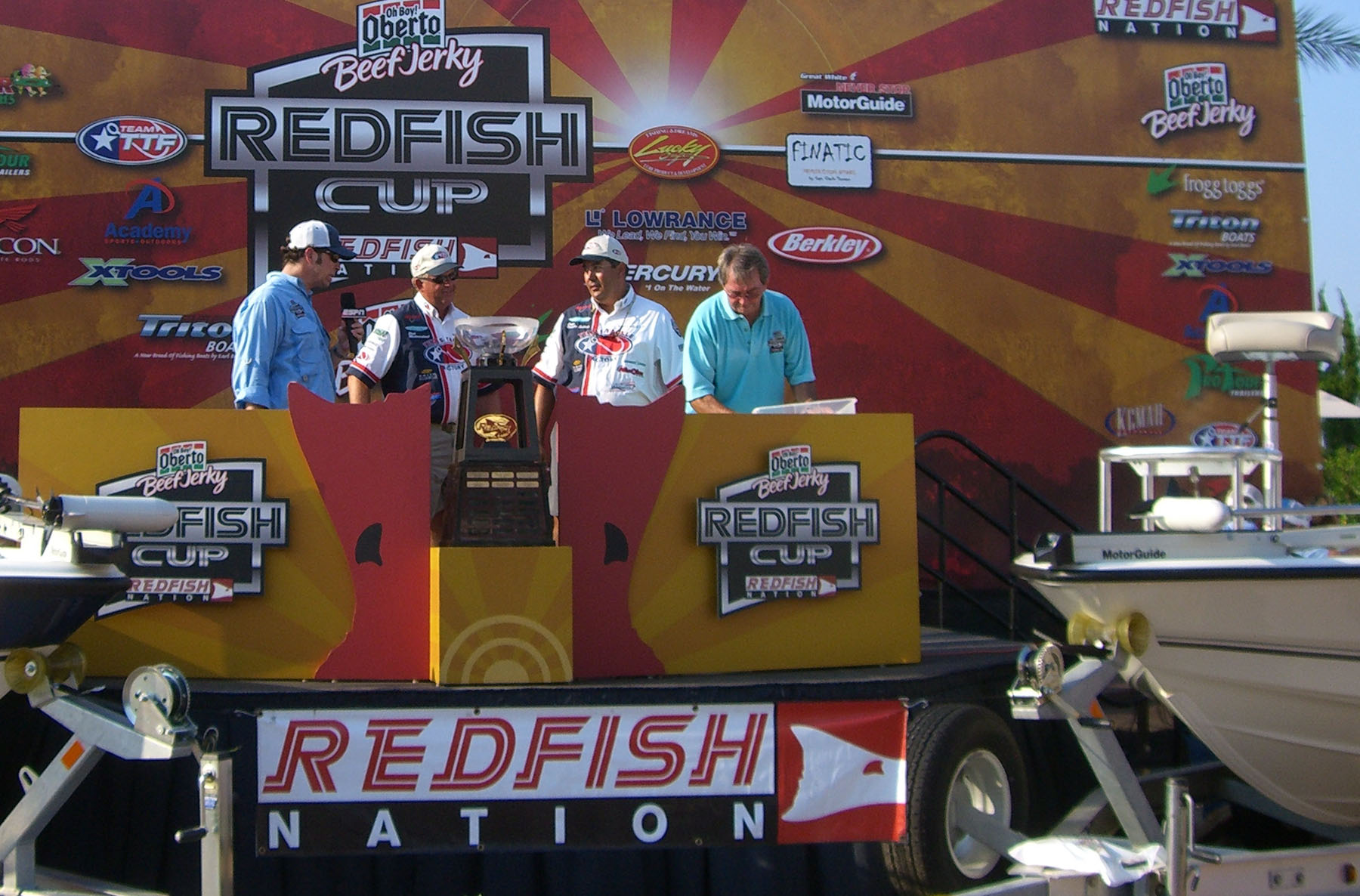 Our first Redfish Cup weigh in.
Reid and I had taken four days off (we work 4-10s) to get a full week of fishing in before our inaugural 2006 Redfish Cup event in Clearwater, Florida. Anticipation was high. The drive to Florida was filled with discussions of spooky redfish, mangroves, our just get two fish a day strategy, and of course, "Hey there's a Burger King, let's exit here."

Day one of our prefishing started with a surprise as Reid announced that one of his dear friends was going to be joining us on the water. And not only was he coming, but his son was bringing his new boat to show us the ropes of Florida fishing. Against better judgement I held back my enthusiasm to get out on the waters of Tampa Bay and waited for them to arrive.

After the normal introductions with Reid and Ron reliving some great stories of shooting pigs in the field behind their house, we were ready to roll. Of course I was ready two hours ago and in our collective wisdom it was decided that I would fish alone on our Xtreme and Reid, Ron and Ryan would fish on Ryan's boat. Great, two hours wasted and it is already late in the afternoon. Well, after leaving the Gandy Bridge, I spent the last couple of hours in Cockroach Bay with no redfish but plenty of snook. Ok- day one down, but tomorrow would be better with a fresh start focusing on duping bronzebacks onto our lines versus entertaining friends.

Headed for the motel, Reid's phone goes off with his now annoying Good, Bad and Ugly ringtone. Oh boy. As I listen in I hear that Ron and Ryan have decided to stay another day and want to know where we are staying so they can join us again. I see the writing on the wall, and as we discuss the plan, the best scenario is to have Ron and Ryan join us in our boat so we can at least fish and discuss strategy.

Day two started with a drive north from Clearwater to a boat ramp located near Weeki Wachee Gardens. Continuing our string of success, we get to the ramp and find it closed for repair. Reid and I and friends decide to drive back south and we find another boat ramp where we can launch. Luckily the low tide allows us to pass under a wooden bridge and head out into the gulf.

On this part of Florida's west coast there are no real bays, the creeks and marshes flow right into the Gulf of Mexico. Within 40 minutes we're at our first spot. That would be 30 minutes to go back to the closed ramp to retrieve Ron's sunglasses that fell of his face without him knowing, and 10 minutes to get to our fishing area.

Trolling into the marsh we began fishing points, coves and creeks. In some of the smaller coves we did spook a couple of good fish and saw their wakes headed for open water. Over the next hour, the four of us continued to drill dry wells and at the same time became aware of a biting insect problem that was getting worse. Later I would find out the name of these lovely creatures is No See Ums. Come to find out, even though you can barely see them, these guys pack a wallop.

Seeking relief we began to tear the boat apart looking for insect repellant. Not hard to guess; no repellant was found. At this point the insects overrode my heat index and on went the Frogg Toggs, hood up. Reid quickly followed and we left our friends to the No See Um wolves.

You can only be a good host for so long. At least psychologically I felt better, if for no reason other than I could watch Ron and Ryan suffer the nasty little bugger's incessant biting. Devoting all his time to flailing at the unseen enemy, Ron had finally suffered enough blood loss. The front of the boat was suddenly overcome with the smell of rusty bolts. Ron had found the WD-40 and was convinced it would repel bugs.

We were now dealing with a middle-aged man with a perfectly straight face, lathered in WD-40, proclaiming, "I think it's working."

Ron's joy was short-lived. As the bugs chewed away they also stuck. Being full of blood and oil-soaked they could no longer fly. Ron continued to collect friends and soon took on the appearance of a Hungarian poppy seed roll.

Ron and Ryan stuck it out and continued to fish. Later in the day with the sun at full strength Ron decided to take his shirt off and expose us to his porcelain white skin which is now beautifully juxtaposed against his tanned arms and neck all glistening with WD-40 and flecked with poppy seeds. Good thing I had my Smith Optics sunglasses to shield the glare. Ready to bake, Ron heads to the platform off the back of the leaning post, six feet above the deck.

Within minutes he decided to step back to the leaning post. His well-oiled foot slipped and sent him into a spectacular belly flop, landing on the gunwale. He lay motionless for what seemed an eternity and then slowly rolled into the water. The only thing that could replicate the sound would have been dropping a thawed turkey. The only difference being that Ron left a rainbow sheen on the water. Luckily, Ron was retrieved no worse for wear and within minutes was ready to go back fishing, but not on the platform. We ended the day finding a few 24-26" fish in one of the creeks.

Ron and Ryan left on the third day and the rest of our prefishing produced nothing better than what we found on day two, so the area with the WD-40 slick was the choice for tournament day. It turned out that about five or six other teams had picked it too.

Day one of the tournament Reid and I caught two fish early, although they were nowhere close to the 27" limit. We had an hour ride to the weigh-in and decided we could afford a few minutes to upgrade our fish from a spot where we'd caught an oversized red earlier in the day. Well, 15 minutes later and no fish meant we were headed to the dock. Thirty minutes into our run the motor began losing RPM and suddenly died. We squeezed the primer bulb and the motor fired. Five minutes later it died again. The motor cut off three more times and finally would not start. I suspected the fuel filter was clogged. I took it apart and re-assembled the housing without the element and it ran like a champ.

On arrival we were greeted with, "You're 15 minutes late!"

I didn't care. We bagged our fish and took them to the stage for weighing.

Later, and to our considerable surprise, we were actually listed in the standings. Yep, we were dead last with -7.0 lbs eight pounds of redfish and fifteen pounds of penalty one pound for every minute we were late. There we were, entry fee and the cost of travel invested, prefishing days wasted, -7.0 pounds on the board, and day two looming. Not a great way to start the year.

We caught our two fish the next day and headed back to Texas with fond memories of WD-40, thawed turkey, negative stringers, fuel filters, and poppy seed-covered friends. A wasted trip? No way, thoughts of that trip still bring a smile to my face and make me thankful I have the opportunity to partake in this great sport.