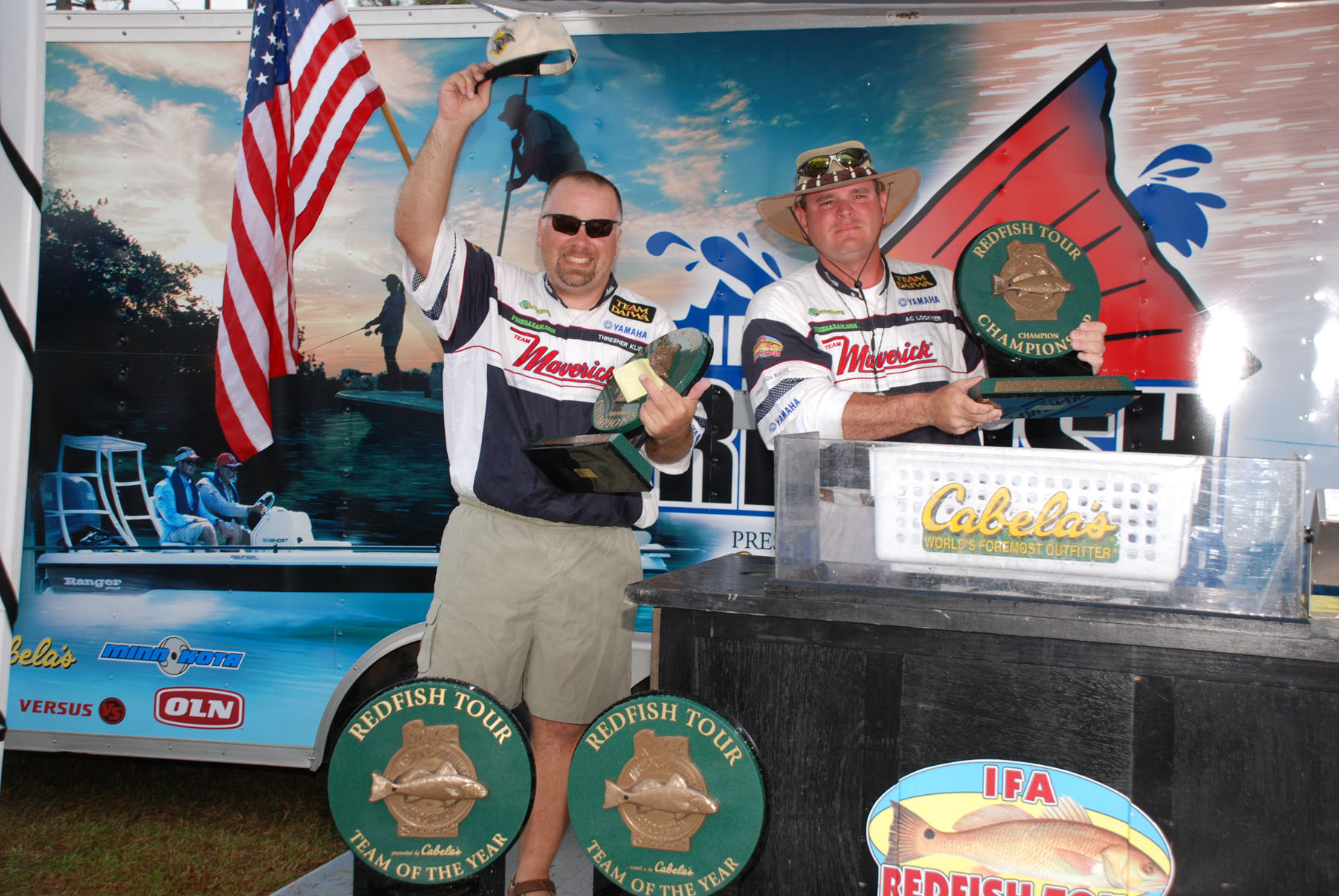 2006 IFA champions, FROM FLORIDA, Lets get it back to Texas.

It was back in 2004. I will never forget participating in my first redfish tournament and my initial expectations of doing well. After fishing several Gulf Coast Troutmaster events, here was a tournament in which I thought I could excel. How hard could it be to catch two big old rubberlips? The tournament was in Aransas Pass, an area I had never fished before, but had read plenty about. All we had to do was drift Estes Flats or Redfish Bay and we would catch two fish, and if lucky we would win. At the captain's meeting the night before the tournament, I decided to buy a couple of raffle tickets and when the last prize came up, I found myself winning a brand new trolling motor. As I picked the motor up, the tournament director said, "It sure is bad luck to win this, you probably won't catch anything tomorrow." Sure enough, all we went home with that weekend with was an empty gas tank, a new trolling motor and plenty of bruises to our egos.

That tournament was the first Inshore Fishing Association (IFA) Redfish Tour (www.redfishtour.com) event in Texas. In 2004, there were 3 events called the Texas Draw and the IFA was really the only game in town for the new (at least to Texas) style redfish tournaments. The only other big tournament was the Redfish Cup which was full up and had people on a waiting list. In just over 3 years, things have changed, but the IFA Redfish Tour remains as one of the top tours in which anglers can participate.

The IFA Redfish Tour was the pioneer in the development and promotion of professional redfish tournaments. Brand new in 2000, the IFA Redfish Tour started in Florida and expanded across to Louisiana and eventually to Texas in 2004. The IFA has continued to evolve to find their niche in the redfish tournament market. An impressive array of sponsors support the Redfish Tour and allows the tour to offer numerous contingency prizes from Ranger Boats, Cabela's, Minn Kota, Humminbird, Loadmaster trailers, Solar Bat Glasses and Keelshield. The Redfish Tour is the only large scale tournament that offers teams a genuine shot at a national championship at an affordable price.

The Tour has setup the most unique and angler friendly tournament and championship format available. There are 6 divisions in the IFA Redfish Tour Series. The divisions cover the south and southeast gulf coasts. There is a Florida East and West, Georgia, South Carolina, Louisiana and Texas Division. Each division has 3 one-day tournaments that culminate in a year-end two day championship that allows competition between all of the divisions. Each division has a divisional team of the year for teams fishing all three events in one division. The divisional teams of the year compete in the national championship for overall team of the year and they receive free entry into a 2008 tournament. The tournaments also have national television coverage.

Any team that fishes three events is eligible to fish the IFA Redfish Tour Championship. So if you are like me and had to work the weekend of the first Texas IFA tournament, you are not eligible for the Divisional Team of the Year. But, but can run to Louisiana and fish a "makeup" tournament in that division and still qualify for the championship. There is no better tour for teams looking to represent their sponsors and have a realistic shot at winning the Redfish Tour Championship for maximum sponsor exposure. And did I mention the best thing, not only will fishing three events get you into the championship, but the Championship is FREE. That's right; there is no entry fee for a chance to win a $34,000 boat. For 2007, the Championship will most likely be held in Pensacola, Florida.

Last year I decided to compete in the Oh Boy Oberto Redfish Cup. Their tour schedule included two tournaments in Florida, one in Louisiana, and two in Texas. With gas at $3.00 a gallon, the entire year really took a toll on my team's pocketbook. The bottom line was that unless you won a tournament, it was difficult to break even. This year, I made the decision to compete closer to home. The IFA Redfish Tour setup is perfect for teams that are looking to fish in their home waters and limit the amount of time spent traveling away from home or work. It allows Texas tournament participation and then a real shot at being a Championship winner. When you look at the entire IFA Redfish Tour trail, the benefits, entry fees and coverage, it is no wonder that the tour is known as the, "strongest grass roots inshore tournament series dedicated to catch and release in competitive fishing."

For 2007, there is one tournament remaining on September 08 in Rockport, Texas. If you haven't yet fished with the IFA, this will be the perfect time to get acquainted with what they offer and also to get your team ready for 2008. I have personally talked with the IFA members and participated in their tournaments and can unconditionally say that the IFA Redfish Tour would not be here today after 7 years of success without listening to the anglers and bringing forward a great product. The IFA is constantly taking input and I encourage anglers to let them know what they like and dislike about the tournament setup. The angler feedback is what allows the tournament to continue to be successful for both the tournament and the anglers.

As I write this, it is the week before the IFA Redfish Tour in Corpus Christi. Yesterday, my partner and I made a long drive to Flour Bluff and spent the day prefishing the Upper Laguna Madre. We were successful in finding the perfect school of fish. We boated a 27-inch redfish, a 28, and a 26 that would have given us a very respectable 15-lbs for the day. Like all tournaments we will hope that school stays in the area and that we are able to find them again on tournament day. Not that I am superstitious (although I do always fish with my lucky rock), but I think at this IFA tournament I will increase my odds of winning and not buy a raffle ticket.