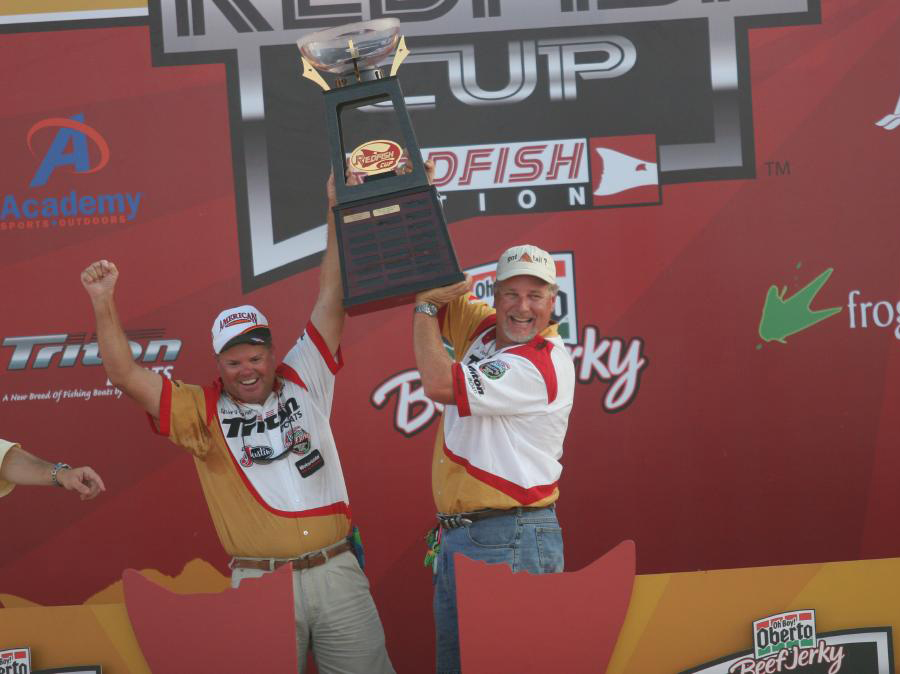 Making it to the top can be shortlived, but worth the work.

It was a typical Monday and two buddies at work were describing their big weekend. Craig and Al started early Saturday morning leaving their homes in Bay City and East Bernard with bait collected from perch traps on Friday afternoon. The South Texas duo planned a day of "catfish huntin" on the Brazos River. After setting numerous limb lines in the morning, the pair came back and found a limb at their favorite spot pulling harder than a toddler at Toys 'R' Us.

The boys proceeded to pull up the tugging fish and instantly realized that this was no ordinary fish, it was THE fish. Al scrambled to get the net while Craig untied the line. The fish headed for deep water and started pulling the boat towards the center of the river. Craig took several wraps of line around his hand and began to pull the beast from the river's muddy depths.

After 20 minutes of tug-o-war, the water's surface began to boil. A massive tail arose and sent a shower of water into the boat. Drenched, Al yelled for Craig to muster all his strength and give the fish one last mighty pull. Quickly Al got the net and tried to get the fish into it. Covering the fish's head with the net, the two wrestled the beast into the boat and heaved a sigh as it hit the johnboat's deck.

The two warriors suddenly felt sadness for the old fish and with a quick glance in each other's eyes, knew what to do. The two quickly lifted the fish and put it back into the water. As the fish swam off, the duo gave each other a high five and realized they had just released the fish of a lifetime and had etched into their minds a story to share again and again.

Now I don't tell this story because I am going to start fishing the Catfish Cup next year, but it made me think about the reasons people fish, different types of fishing and the reasons we keep going back to the water. From bank fishing with a cane pole to fly fishing from a poling skiff everyone has their favorite way to fish. No particular fishing type is better than another because everyone has their own view of what they like the best. Personally, I grew up wade fishing and learned to love being in the fish's environment. There is nothing like landing the big one at close quarters when you see only one barb of your She Dog's treble hanging on to old yellow mouth.

I also admit I enjoy tournament fishing. Having heard people say tournament fishing is nothing more than people fueling their ego, I agree that there is a part of me that is competitive and wants to pit my skills against others and relive my "victory" on Monday morning. If that is ego, I have it.

Now it has been a while since I have been on a sports team and I am not sure I could compete very well anymore in the traditional sports. Earlier this year after volunteering to umpire my son Connor's little league game, 5 innings of "umpire squat" left my legs so sore, that I could not even step up on our Xtreme's casting platform for 3 days.

Fishing on the other hand is a sport in which I am confident and can actively participate. I do not have to sit on the sidelines and root for my favorite team (The Fightin' Texas Aggies), but I can be in the game. Seeing how well I do against others pushes me to do better and try harder. Taking time to ensure every detail is laid out prior to tournaments: retying knots, respooling reels, checking all items on my boat to ensure that a breakdown is eliminated is a ritual I have come to look forward to.

For me, tournaments are not just about leaving, catching two fish and coming home. Tournaments are about finding the RIGHT fish and getting them home. Last year, I made two major mistakes. In my first Redfish Cup tournament, I was fortunate enough to make the Top-5 and fish on Day-3. That day, we had 2 fish die and those dead fish cost us 2nd place and $5000. I had learned a valuable lesson in fish care.

Later in the year, in the FLW Galveston Tournament we had made a long run and were fishing a lake littered with oyster reefs. Our bite was at the end of each day and with about 1 hour left on Day-2, our bite started. We quickly caught a fish and I wanted to move over to our second spot to pickup another fish. The spot was a short idle away, but to save time I decide to get on plane. Just as the boat was getting on plane, it ran upon a reef. Now this was not just your ordinary get out of the boat and push kind of stuck, it took us over an hour to move our boat 5 yards. Needless to say, we were DQ'ed on Day-2. After that, I vowed never to be late again.

This year in our first Redfish Cup in Florida, we made a 60 mile run north of Clearwater. I have always been told to catch two fish and be happy in Florida. The first day we had our two fish early and as it came time to leave, we decide we had to try one more spot to upgrade our fish. That extra time pushed us to close to the edge and we were late to weigh in. Something I swore not to do again. Our team had started the first day of the first tournament in one of the toughest places to fish by DQ'ing our two fish. My frustration level was very high after only one day of fishing in 2006 and I will have to admit that in 2006 I had more lows than highs.

So here I sit at the end of the year and wonder why I put myself through this. Why continue the frustration and work for a few minutes of limited fame. Well the answer is in the catfish story. Just like my catfishing buddies who take pride in their catch and telling their story, I admit to wanting to win and share my story. I freely admit to enjoying the competition and enjoy the feeling of doing well. Is it my ego that fuels my desire? Well if it is; so be it, at least I admit it. I love the competition and being able to be the best at something even for a short moment of time will make me continue to work for my 15 minutes of fame.

Are tournament fisherman any different that most other fishermen. Based on my buddies' story and others that I have heard, I would say no. Down deep we are competitive and want to be able to say we are the best at something even for a short period. I believe most fishermen would enjoy tournament fishing and the competition and camaraderie it brings. For 2007, fuel that competitive desire and admit you would like to try a tournament. Sign up for one, try to grab your 15 minutes of fame and don't be afraid to admit you like it. There is nothing wrong with that.