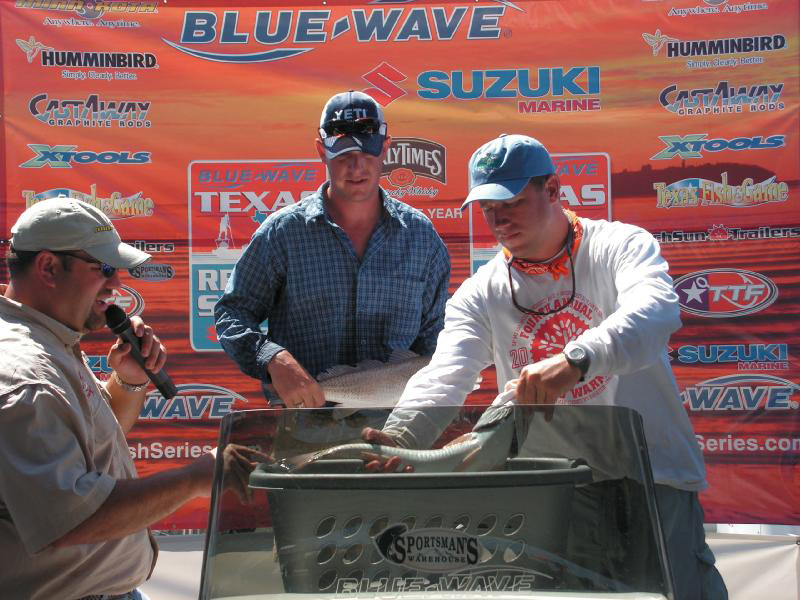 "What? Never get out of the boat! This is Texas and we wadefish here. We don't need no stinking Florida boys to tell us how to run a fishing tournament. Those guys are just scared to get out and fish against us at our level and how we fish. I sure wish someone would come up with a redfish tournament that would let us wade, something for real Texans."

The above were a few words heard when redfish tournaments first came to Texas in 2003. From 1999 to 2003, the Texas inshore tournament scene was dominated by anglers fishing the Troutmasters Series. Troutmasters allowed anglers to wadefish in search of a winning stringer. In 2003, the Oh Boy! Oberto Redfish Cup came along and changed all that by requiring tournament anglers to remain in their boat. No, it was not to punish Texans and make them stay dry, but a way to allow television coverage of the anglers, boats and sponsor's products.

In 2004, I met a redfishing team comprised of Scot Simmons and Jim Elrod. My team and Scot and Jim's team were competing in some of the first IFA redfish tournaments held in Texas. Both Scot and Jim were very personable and I was struck by the amount of questions they asked about the tournament and what I would like changed. After seeing them again at several other tournaments, Scot told me that next year; he and Jim were going to start their own redfish tournament series. My initial thought was, "Yeah right, and next year I am going to design an outboard motor that gets 42 miles per gallon and never overheats."

In 2006, the Redfish Series enjoyed great success. It completed its first full field tournament and the Series became the perfect tournament, filling a niche between the big, multi-day and expensive tournaments (Redfish Cup and FLW Tour) and the smaller, single day, charity type tournaments. The Series is a great one day event that anyone can enter, enjoy and not feel like they have lost out or wasted money at the competition's end. "The Texas Redfish Series is specifically designed to introduce the weekend angler to tournaments in a fun and affordable environment" says Scot Simmons of Simrod Outdoors, L.L.C.

This month, the Texas Trout Series (www.troutseries.com) will kickoff the 2007 events in Port O'Connor on January 27. The Series will finish up with 2 tournaments in March held in Corpus Christi (March 3) and Matagorda (March 31). The championship will be held in Port Aransas in April. True to their roots, Scot and Jim have polled their tournament anglers and instituted several changes for 2007. The Trout Series starts in January and will finish by the end of March to help the trout survival rate by fishing during the cooler months of the year. The entry fees have been lowered to $300. The tour will reward teams that sign up for all 3 tournaments with an extra 20% bonus to their payout winnings and give them the opportunity at free entry into the championship. Wade fishing will continue and for 2007, the boundaries have been expanded to 300 yards and one angler can pick up the other with the boat. And last, but certainly not least, the tournament boundaries will be limited to within 60 miles of the take off location. I personally commend the Series for implementing a boundary rule and hope that this will extend to other tournament trails. The boundary helps to equalize the tournaments as teams have to work to find fish in the tournament area versus trying to have a long range, fast boat designed to get back to a certain spot or area that a team fishes routinely. A range of 60 miles provides plenty of water for all teams to fish.

In May, the Texas Redfish Series will kickoff in Port Aransas (May 5) and will host four tournaments ending in August. The tournaments will be in Port O'Connor (June 16), Rockport (July 21) and Galveston (August 18) with the championship on September 15 and 16. The Redfish Series will have fewer changes than the Trout Series, but will have the expanded wadefishing boundary of 300 yards. The Redfish Series grew over 100% in 2006 and has over 350 members. The entry fee will remain at $300 and have a similar "Tournament within a Tournament" setup as the Trout Series.

Another big announcement for the 2007 Series will be increased television coverage. Scot revealed that they will be producing a "Texas Saltwater Series" show that will not just have tournament footage, but focus more on the techniques and tactics of catching fish. Some of the show will actually be filmed the day after the tournament to allow anglers more time to focus on teaching versus actual tournament fishing. If you are a team out there trying to get sponsors on board, there is not a better bang for the buck where you can fish for a $300 entry fee and garner television coverage for those sponsors.

So it sounds like the Texas Trout and Redfish Series have plenty to offer for 2007 and the trail is headed in the right direction. Plenty of changes are in store, growth is good and Simrod Outdoors is satisfied with where they are headed. WRONG! The dynamic duo is looking at starting two additional tournaments to cater to even more fisherman. Look for the Spot Series tournament with two stops along the Texas coast. The entry fee will be lower than the Trout and Redfish Series and the winner will be the angler that brings in the redfish with the most spots. The Spot Series will be open to all anglers and one can fish from the bank, boat, piers, etc. Prizes may range up to a boat, motor and trailer package. Also look for a Kid Series tournament with low entry fees designed for the family and proceeds going to a non-profit organization.

The bottom line for 2007 is the Texas Trout and Redfish Series will be offering something for everyone, from diehard tournament anglers to families looking for a fun day of fishing. Scot and Jim have designed a tournament trail to allow anglers an easy entry into competitive fishing. If you have any questions or comments, send them an email ([email protected]) or drop them a line (210-385-3333). It is truly refreshing these days to find someone that will listen to you and actually implement your feedback. So the next time you hear someone complaining about tournament entry fees, no wadefishing, or I can't compete against those guys, tell them about the Texas Trout and Redfish Series, the best little (and growing quickly) tournament trail in Texas.