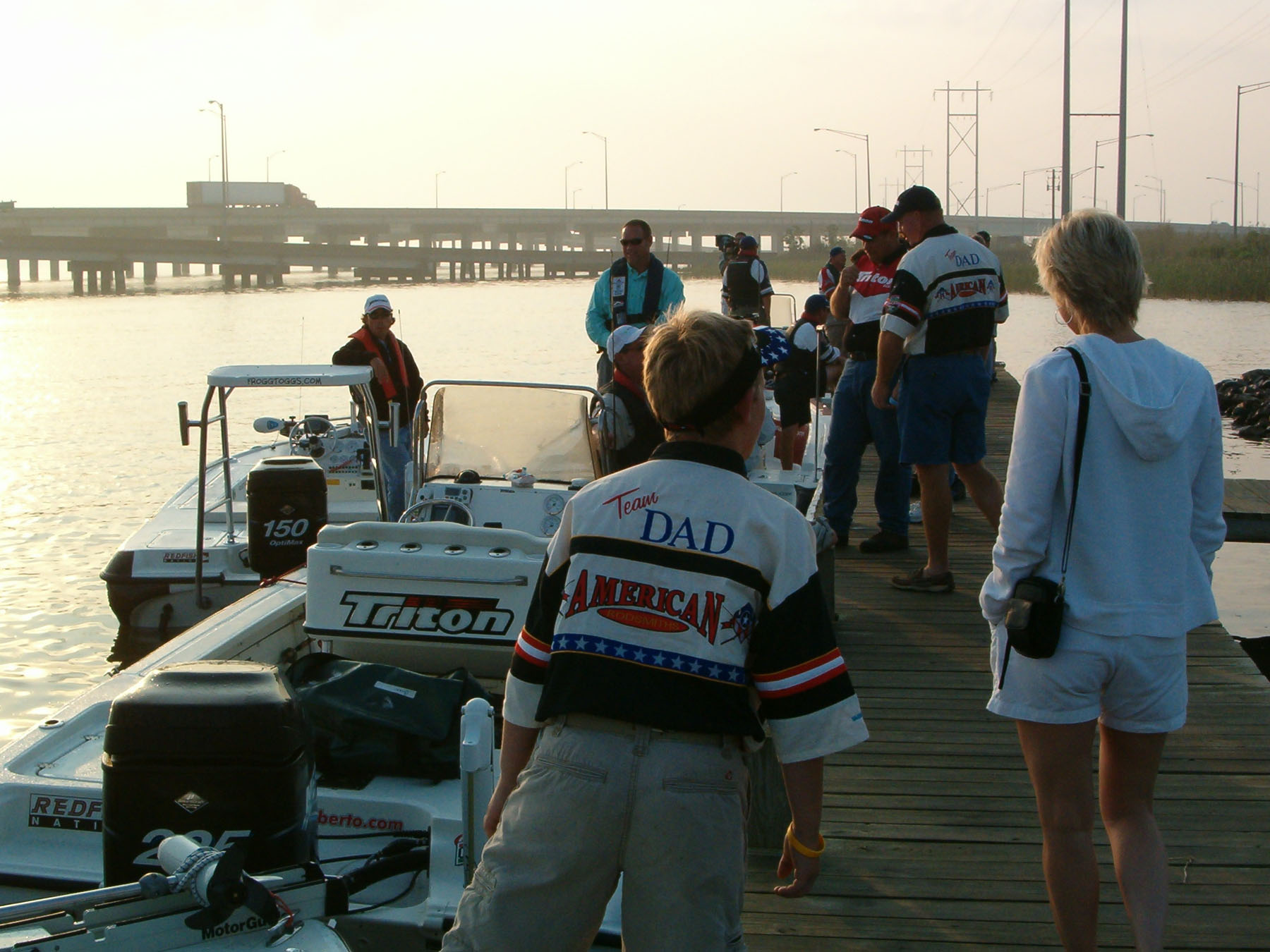 Fishing to win or fishing to catch fish, when participating in tournaments, what category do you fall into? After fishing tournaments for several years, it seems that most anglers fall into distinct categories. If your team has been prefishing for a tournament several days and the best area found has consistently been producing 4 lb. redfish with an occasional 5 lb. fish, what will be the tournament day strategy. Go for the sure thing and catch 8 lbs. with an outside shot at 10, or drop the areas pre-fished and go somewhere new to have a shot at winning?

As tournament fishermen progress in their careers, approaches to fishing tournaments will also change. When starting out, many team's main goal is to catch two fish and make sure there is a trip across the stage at weigh in. After a couple of years and feeling more confident that two fish can always be put in the livewell, the goal may change to always get 12 lbs of fish to the scale each day. I believe the last stage to progress to is do whatever takes to win. I know this year, our team goal is to win tournaments and if that means losing real bad, so be it. Yes, it is nice to be near the top of the leaderboard, but to win tournaments should ultimately be everyone's goal. Some will argue that consistency is most important, that if a team is consistent, that team will be in a position to win more often and I agree with that. The idea I want to get across is that many times you have to take risks to win a tournament and if you are not ready to accept the consequence (i.e. catching no fish), it can hold teams back.

Look at the tournament results for any tournament series over the past few years. There will be a select few teams or individuals that will consistently be at the top of the pack. There is not doubt that teams that are consistent have a great understanding of the species they pursue. Normally, the depth of understanding has come with time on the water and knowledge of how fish react in all weather conditions and in the areas being fished. But look at who actually wins tournaments, in general it is rare for a team or individual to win more that one tournament in a row or a more than one in a year. There are a few exceptions when a team gets on a hot streak and will win more than one or win several tournaments in a year, but in general, tournament wins are not something that someone can count on. The odds are against winning a tournament and that is precisely why it is so satisfying to achieve a one. Beyond the personal satisfaction, think about what a win is worth in publicity for your sponsors and what it is worth if you are actively searching for sponsors. Everyone has heard the old saying that no one remembers second place. A team of the year award does show that a team has done well and been very consistent. Team of the Year is difficult to achieve, but look at the payouts for Team of the Year versus payouts for a tournament win.

There are so many variables in fishing, that when you have a shot to win, you have to take it. I truly believe that numerous teams are so worried about not catching fish that it holds them back and keeps them from performing better. This year, we have adopted the motto of, "Hero or Zero". Any redfish tournament on the Texas coast will pretty much take at least 14 or 15 lbs a day to win and a goodly number will require 16 lbs. So the bottom line is if you are settling for 10 lbs. before the tournament starts, you have basically given in to not winning. Fishing while hoping to stumble on to 2 good fish can work, but the odds are against you finding the two perfect fish. It takes time and fishing numerous tournaments to get over the, "just get 2 fish" strategy, but the quicker a team can move to the Hero or Zero mentality, the better they will be. Going to a new area and scouting for bigger fish is not easy to do, especially on tournament day, but I truly believe that teams will have a better chance at finding bigger fish by going to new spots versus hoping to pull two pigs out of a school of runts.

Earlier this year, we fished an area that was producing big fish. Prefishing we had caught several 8-9 lb slot redfish. The area was very inconsistent and one day we would catch several fish, then next day, we could not buy a fish. There were several other areas we had fished that we felt could give us a good shot at 12 to 13 lbs. of fish, but we made the choice to go try and catch the bigger ones. That tournament, the IFA in Port Aransas, we ended up with just over 11 lbs. and somewhere near 30th place. Several weeks later we kept fishing in the general area and knew the big fish were there, but again the fish were inconsistent to catch. We were able to reach the same area our next tournament and we were able to pull out 2 big fish and win the Texas Redfish Series in Rockport, Texas. Now, I am a realist and I know that there was some amount of luck in our win, but we also knew that the area we were fishing had potential for a win. We spent our prefishing time learning more about the area and trying to pattern the fish. It paid off for us that day. If we were focused on catching fish and making sure we had 2 fish for the weigh in, we could have fished somewhere else with more fish, but with our Hero or Zero motto, there was never any choice.

So what is the one thing that holds someone back from getting to the Hero or Zero stage? I has to be one's ego. As soon as one can live with pulling a zero and not feeling bad about it and counting it towards the learning curve, one can move to the fishing to win strategy. There is no doubt that in any sport, the people that win take chances and are always willing to take chances. Think about other sports. How many times has someone been leading a golf tournament into the final day and round. The person has a few stroke lead and decides to play conservative and loses the lead due to changing the way they are playing. The same goes in football or other sports where teams decide to play conservative and does not take the chances or risk to win. Teams are so worried about losing the lead or the ball, the team ends up losing the game. Whatever it takes, get over the worries of losing or zeroing, work on it. Zeroing and the "Isle of Shame" is not a fun feeling, I can tell you from experience, but it happens. The bottom line is that only one team will win a tournament, everyone else will not win. So take the chance to win.