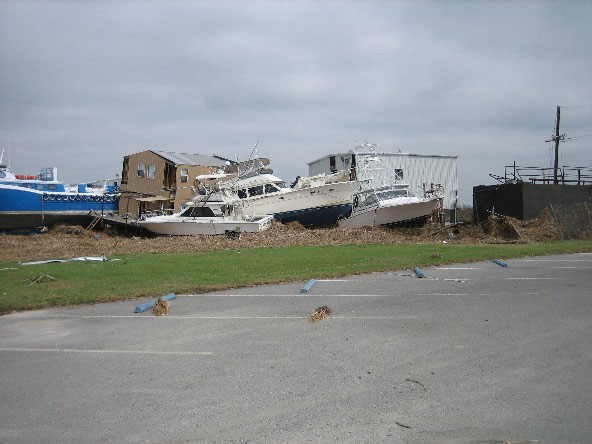 Sitting on the bed eating a "Mega Ham and Cheese Sandwich" and a bag of fiery hot Cheetos, I began feeling guilty about fishing today. It was one of the best fishing trips I have had; catching and releasing over 25 redfish from 26 to 40-plus inches. All of the fish were caught trolling banks and sight-casting. Maneuvering our Majek Xtreme as slow as it could go, orange-brown shapes would magically appear at the outer edges of my and my partner's field of vision. Once spotted, we would toss or flip a #4 blade H&H spinner bait rigged with a 1/4 ounce jighead and purple and chartreuse Red Killer in front of the fish we wanted. Slowly cranking our baits, the reds would come up to the bait and inhale it. It was truly an experience that I will never forget and one that filled me with excitement to go along with the guilt as we prepared for the 2006 New Orleans Redfish Cup.

The fishing was awesome and just what I had expected, but what I will not forget is everything else I saw on my trip, everything other than the fish. We were fishing in Venice, Louisiana exactly one year after Hurricane Katrina slammed into the Louisiana and Mississippi coast. Driving south of New Orleans that morning I saw firsthand the devastation this area has taken. One year later the area is still recovering from America's worst natural disaster which left over 1,300 people dead. Surveying one small piece of a larger and still recovering area, I felt uneasy knowing this was not the worst place where people need help. There were few homes standing, and if a home was standing, it was damaged beyond repair. Each place where a home once stood, a travel trailer now sat. The majority of the people are living in travel trailers while their homes are gone or sit damaged awaiting repair. The schools where kids had a short ride to learning now sit unattended and in disrepair. The Corp of Engineers continues to repair levees that were never intended to protect areas from a storm like Katrina. It will be years before the area is back to what it was before the storm.

That evening we ventured out to eat at one of Venice's three restaurants and quickly found that they all close at 6:00 pm. We ended up at the Venice Hardware Store where we purchased our Mega Ham and Cheese and Cheetos. The inside of the store was still in disarray and talking with the owner, it was difficult for him to find any help in the area for the store. The owner ran the store by himself and was visibly tired, with most of his time tending to sales of what little merchandise he had. We went back to our room at Cypress Cove Marina (http://www.cypresscove.net/explore.cfm/cypresscovemarina/) which has repaired its hotel and some of its cabins. Damaged boats and buildings are still around, but the slow cleanup has started and Cypress Cove along with Venice Marina (www.venicemarina.com) are open for business.

The one thing that was readily apparent is the people of Venice are resilient and hard working. No one we talked to was asking for a handout. In fact everyone we met was extremely welcoming and helpful in our stay. The town wants to get back to normal and have people coming to stay and partake in the awesome fishery that Venice is the gateway to. The town is one that is totally dependent on the riches the Mississippi Delta provides from fish and fishing to the oil and gas beneath the delta.

On the fishing side of the house, the Mississippi River delta and coast has changed drastically. Last year, we fished the Wagon Wheel area just north of Venice. The Wagon Wheel is an area where numerous wells have been drilled and the canals that interconnect them form a wheel shape. The area was very rich in bait and vegetation and the clear waters that filled the ponds held some of the fattest redfish you can imagine. That trip, we had caught a 27-inch redfish that weighed over 9 lbs. The ponds that we fished in the Wheel teemed with bait and it was like bass fishing for redfish.

A year later, our trip back to the Wagon Wheel to check the ponds we fished, provided a glimpse into the changes that have taken place. We began our trip around the outside of the Wheel and immediately noticed there was no vegetation growing in the water. We continued to circle the Wheel to the area we had fished near a pumping station know as Little Toledo. Trolling into a previously 4-foot deep canal, the trolling motor began hitting bottom and there was marsh growing where the canal once was. The canal had filled with silt. Turning into our pond, we found it no longer existed. The lush clear pond had been blown away along with all the other ponds in that area. The pond was now open water that only had marsh banks and no longer held teeming bait. Again there was no vegetation or grass growing to help filter the water and provide hiding places for small bait. Only the marsh edges remained. The water was muddy and lacked the deep channels that funneled water through it creating perfect ambush points for hungry redfish.

My trip to Louisiana was just a glimpse into a tiny piece of the devastation of Hurricane Katrina and its lasting effects. In today's world of the constant media blitz, it is easy to forget things that happened over a year ago. For most, Katrina ended way long ago as the next new news story filled the airways. For the people of Louisiana, it will be a watershed event; one which will leave horrible memories for many and will never be forgotten. The people affected by Katrina will return to a normal way of life. I was not left with the impression that anyone would not rebuild their homes and slowly work to regain the way they have lived their lives. Life in the Mississippi Delta is what the people of Venice know and they are working to return to it.

The last afternoon I was there, we were going to cross the gulf from Venice to Barataria Bay and then on to New Orleans. As we exited Red Pass headed to Four Bayou Pass, we saw a redfish bust the surface. I immediately stopped the boat and trolled back to the spot where we saw the bait being busted. A large school of bull reds was cruising by and we launched our baits into the school where they were immediately inhaled and the fight was on. We landed our 37 and 34-inch reds, unhooked them, took some quick pictures and released the fish. As they swam away, I fired up the ETEC and began the long ride home. I thought about how lucky I am to be able to enjoy the great sport of fishing. Staying in Venice truly let me see what is important in life and how everything one has can be taken away instantly. I want to thank the people of Louisiana for letting me stay in their area and towns and making me feel welcome while they return to a normal way of life. If anyone is thinking of taking a fishing trip, Venice is a great place to go. You will be helping the economy and enjoying the fishing of a lifetime. The shape of the Delta has changed, the people are in the middle of rebuilding, but the fish remain and the fishing is outstanding; which like the river flow, is the one constant of the Venice area.