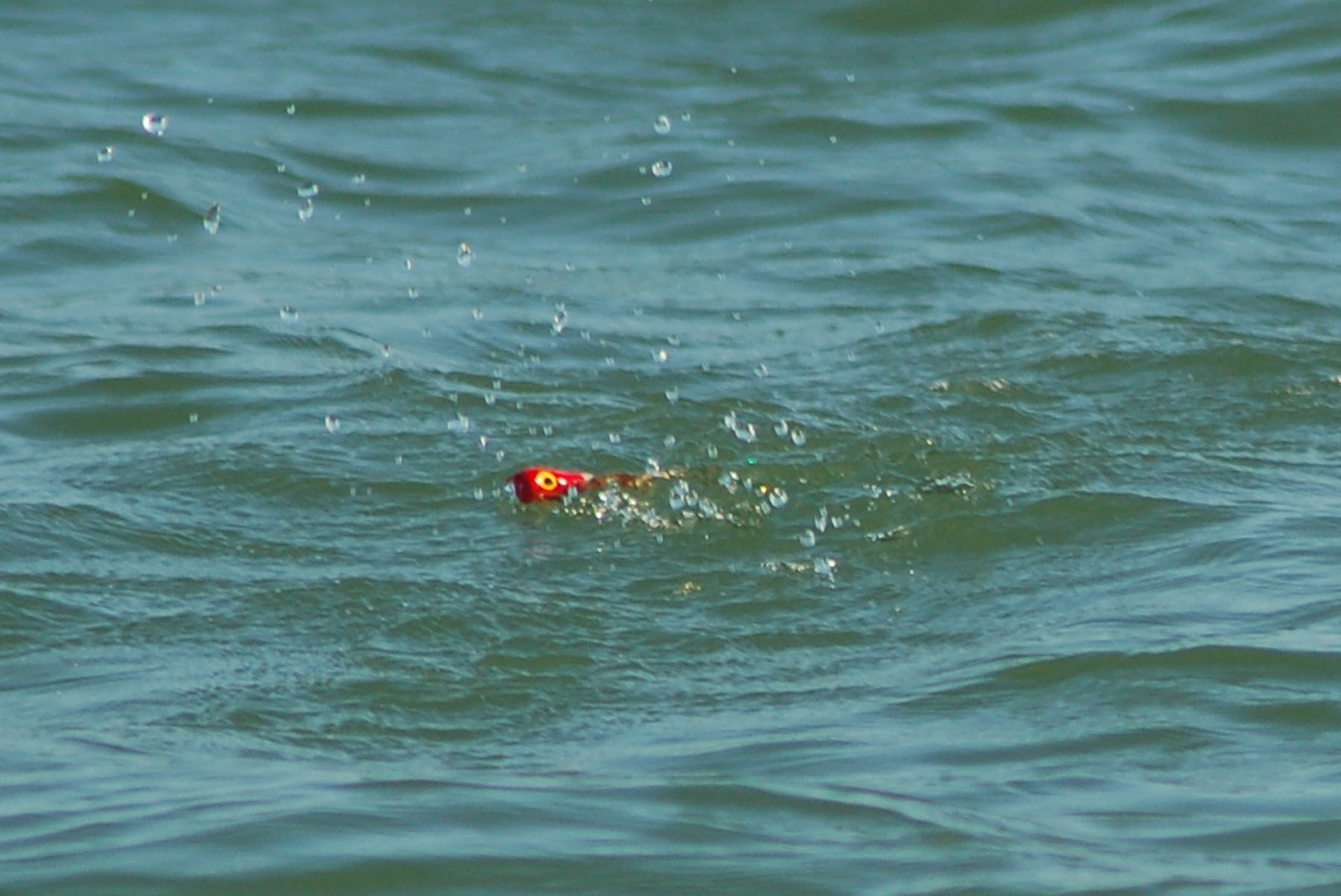 Chug Bug making popping action.
One of my team's first redfish tournaments was the FLW Redfish Series out of Grand Isle, Louisiana. It was during day one of a two day event and we were trolling in a clear, shallow pond. There were a couple of narrow inlets with swift currents pulling balls of baitfish. I tied on a chrome/blue She Dog and the second cast irritated a good fish into striking. Playing the fish up to the boat, we saw it was a typical Cajun Pumpkin, short and fat, with a huge ball of grass and my She Dog stuck to its head. Suddenly, just as quick as it had engulfed the "Dog", the hook let go and off swam the bronze beauty. On day two, using spinnerbaits, we stuck and landed two good reds that weighed just over 15 lbs in the same spot. I learned the value of spinnerbaits, and also made a vow to remove topwaters as a bait to be used during tournaments.

This past year, we fished several tournaments in areas near and similar to our home waters of Matagorda. Often faced with off-color water, a rattle cork with scented plastic bait was my go-to setup. During prefishing, wanting to add a little variety, I went back to a bone/chrome She Dog. It did not take long for me to wonder why I ever quit throwing topwaters. Now, one will still lose a few more fish using a topwater, but usually tops will call up the bigger fish and during tournaments, and that is the name of the game.

There are numerous brands, shapes and sizes of topwater baits; since I cannot discuss them all, I will discuss a few of my favorites. For a traditional surface walker, more often than not, a Mirrolure (www.mirrolure.com) She Dog (83MR Series) will be tied on my string. With two rattles and thinner plastic than the original Top Dog, the She Dog just outright irritates fish into striking. For clear, calm water, a Top Dog Jr. (84MR Series) is a great choice. With one rattle and a little less buoyancy than a She Dog, they are not quite as obtrusive and a little easier to work. Both the Top Dog Jr. and She Dog have upsized and downsized brethren. The Top Pup and She Pup are the smaller lures and the Top Dog and He Dog are the big dogs of the line.

If a traditional surface walker is not drawing strikes, another lure to try would be a combination walker/popper such as the MirrOLure Popa Dog (87MR Series), which has a concave lip on the front of the lure. During the retrieve, the lip creates more noise and water disturbance that a traditional topwater. Another good surface popper is made by Storm, and theirs is called the Saltwater Rattlin' Chug Bug. It is slightly smaller than a Popa Dog in size.

Other types of topwaters I have found to be effective are the King Rat and Grass Frog by Strike King for heavy vegetation areas. Also, there are baits like the MirrOlure Prop Bait (5M Series) with twin counter rotating propellers. These topwaters are used more in special situations but it comes in handy to have a couple around when needed.

Not assuming that everyone knows how to use topwaters, the most common presentation is the one we call, "walk-the-dog." Walking the dog moves the lure's head from side to side while it moves forward just slightly. This action mimics a wounded baitfish. One of the tricks I like to use when walking the dog is giving the lure a little slack, this helps create greater movement from left to right. The motion begins at the wrist (move the rod tip about 1 foot) with the rod parallel to the water's surface and at right angle (90-degrees) to the standing line and the lure. It takes only a slight wrist action to get it moving and of course you need to simultaneously crank the reel handle. Each twitch of the rod will move the lure's head in the other direction. Moving the rod too much or not giving the lure enough slack will cause the lure to lurch straight forward and not walk. It takes a little practice and experimenting to get the right rhythm. The surface popper type lures are a little easier to learn as they can be worked with a short jerking action that causes the concave lip at the front of the lure to pop and spit during their lurching movements.

When actually fishing topwaters, I will normally start out with a black/chartreuse or a bone She Dog. How the fish are reacting will dictate changes. If the water is clear and calm, a lack of bites would drive me to change to a Top Dog. If the Top Dog does not draw any attention I'd probably switch to a popper. If the fish are hitting the bait and not getting hooked, try downsizing to a Top Pup or She Pup. Again, experimenting with and colors may turn the tide from no hits to wearing the paint off your lures.

In addition to changing sizes and color, varying the bait's retrieve can make a big difference. Start with a cadence of twitches and short pauses, if this seems not be what they want, you can try a steady "twitch only" retrieve. Vary the length of the pause; letting the lure sit for 20-30 seconds can sometimes draw strikes. I've also seen times when burning the lure with almost no side to side action is the hot setup.

Here are a couple more topwater tips:
-Learn a good loop knot. Loop knots let the lure swing freely to create the best action.
-Try setting your drag a bit looser than normal. Heavy redfish can easily dislodge and even straighten hooks on those first strong runs. A softer drag setting helps prevent this.
-When a fish hits your plug, resist the temptation to set the hook immediately. Redfish are notorious for crashing a bait and then waiting a second before eating it.
-If you get a blowup and the fish does not get hooked, let the lure sit for 10 to 15 seconds; you will often get a follow-up strike. If not, make a couple of twitches, let it sit and then get the bait moving again. Try throwing to the same spot with your next cast.
-Bait and switch is legal. During the Redfish Cup in Clearwater, Florida the only way we could catch a red was by getting them to blow up on a topwater and immediately following it with a Killer Flats Minnow. We never hooked one on the topwater, but they always took the Flats Minnow.

So for 2008, Mr. Topwater is back in my box. For prefishing and certain water conditions, I will always have a topwater tied on. They are not only the most exciting way to catch fish, but cover a lot of water and are a great gauge of fish aggressiveness. I may lose a couple more fish than I like, but then again without a topwater tied on, the chance to lose fish may not have been there.