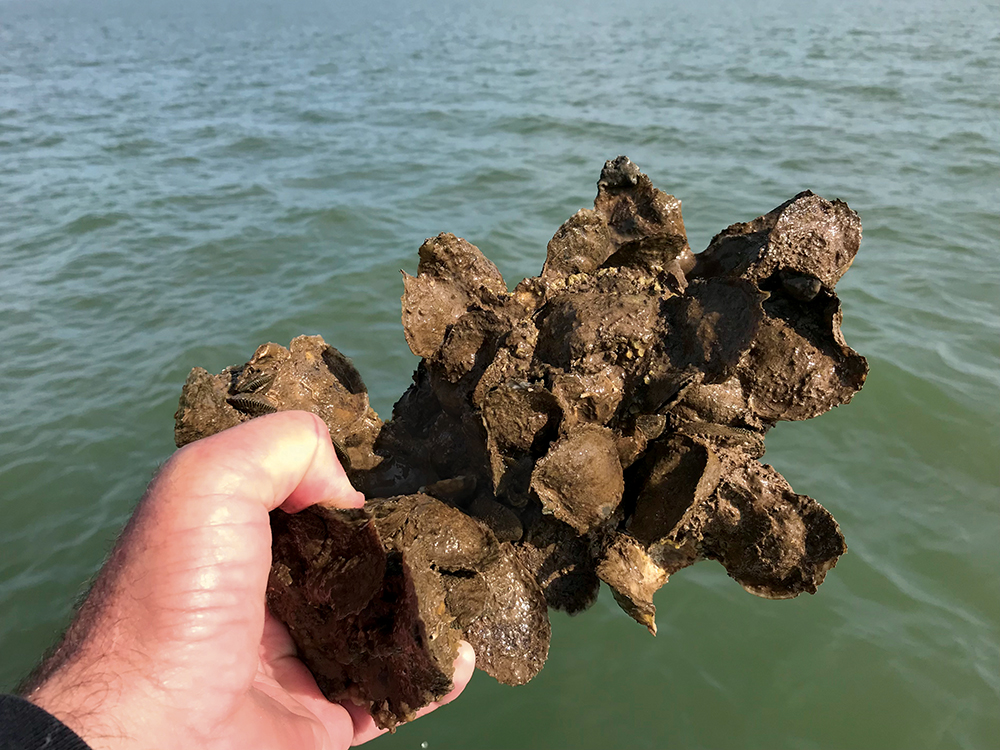 Areas with new oyster growth like this can provide some unbelievable fishing at times.

If I had a dollar for every time someone asked that question I’d have enough money to fish for fun. The million dollar question has always been and will always be “WHERE?” The answer provided by many to those with such inquiring minds usually involves a specific location. In my opinion, though, sharing an exact spot is mostly counterproductive. Not only can doing so make an area too crowded to enjoy, it does nothing to teach the inquirer the how, when, or why that might help him or her become a better angler.

Spot selection is the first and most important step in planning a productive fishing trip. We may have all of the latest and greatest equipment and gear that money can buy but if we choose the wrong location then it just becomes casting practice. So, how do we avoid unproductive areas?  There are some very simple characteristics that I look for every time I’m on the water regardless of the month or season.

The number one characteristic I want my target area to have is suitable habitat. One type of habitat at the top of my list is live oysters. It doesn’t necessarily have to be a large reef; it could be a small area with clusters of scattered oysters. Many of the areas I fish have jagged individual clusters of oysters growing upward from the bottom like stalagmites in a cave. We often refer to these as towheads. Various seagrasses offer great habitat to target as well. Shorelines lined with Spartina (cordgrass) also hold plenty of small crustaceans and other marine life that attract target species such as trout and redfish. Just about any type of habitat is better than a featureless mud bottom.

Most of the areas I fish have varying depths. The other day we caught some really nice trout on MirrOlure Lil Johns drifting off of a ridgeline (ledge) that dropped from 3 feet to 4 feet, while transitioning from mud to very thick live oyster reefs covered with clusters of spats (small, newly formed oysters). I’ve also had very good results wading washouts through reefs along the Intracoastal Waterway. As a matter of fact, one of my biggest trout from West Galveston Bay came from such an area back in February 2007. I caught her on a green back, gold side, yellow belly (20MR19) MirrOlure Catch 2000.  We don’t have a ton of them in Galveston Bay but sand pockets (potholes) surrounded by seagrass are excellent areas to target. Bayou mouths with deep troughs going out into the bay are also fantastic areas, which brings me to another beneficial habitat characteristic.

Narrow pathways with good current flow such as cuts through reefs, bayou drains, mouths of coves, and small peninsulas all offer an added advantage as they not only provide forage highways for trout, reds and flounder but serve as easy ambush points for us and our target species. There is usually a temperature change associated with these Venturi effect type areas as well. This is especially true in areas where back lakes dump into the bay. Water temperatures will sometimes be 3 or 4 degrees higher near these openings. Bait will gravitate to such areas and there will often be streaks of slightly off-colored water which gives us yet another advantage for tricking our quarry.

A common trait of the areas I’ve mentioned is that they all hold various species of forage species; mullet, shrimp, shad, and crabs. I will always keep my eyes peeled for the presence of bait but as you can see bait is pretty much a byproduct of the areas I’m targeting. In addition, when forage and prey are both present in the same areas we usually see other signs such as slicks. Everything seems to come together when you’re in the right location.

The best spot may not always be the most comfortable or the easiest to fish. If you know for sure where the fish are but you think the wind is wrong or the water is too muddy, it might still be smart to give that spot a try so long as it’s not dangerous. I remember back in 2009 when I was hired to take a group in a very large fundraiser tournament. I had been on some really solid trout leading up to the tourney but, as usual, weather conditions were forecasted to change on tourney day.

The fish I had been catching were living on a narrow stretch of live oyster reef in the middle of Galveston Bay. They were easy to catch in calm or light wind conditions but too much wind would not only muddy the warm summertime water but make it very difficult to stay on this small area. The forecast called for northeast gusts to 15 mph. This was not only more wind than I thought this particular spot could handle but the direction was even worse! I had to come up with an alternative plan.

On tournament morning it turned out that the forecast was actually wrong.  It wasn’t gusting to 15 mph; it was more like sustained 15 mph with gusts reaching 20 mph! We slowly made our way across the bay to a semi-protected reef near the north shoreline. We grinded for several hours with only a handful of 2-pound trout to show for our efforts. There were a lot of really good fishermen in this event and I figured we would need at least 20 pounds (5 trout creel) to win. As the day wore on the wind eventually subsided somewhat but the water out in the middle of the bay looked like chocolate milk. We had less than two hours before weigh-in and I decided to venture out to that little reef in a last ditch effort. After all, we had nothing to lose at this point.

Sure enough the visibility was less than 2 inches as we began our first drift.  I rigged the guys with dark-colored soft plastics. Half of them were armed with Red Shad Saltwater Assassin Sea Shads and the other half with Rootbeer D.O.A. C.A.L. Shad Tails. The darker colors contrast well in the murky water and the paddle tails create added vibration to help trout zero in on the baits. In addition, the D.O.A. baits are impregnated with a natural fish attractant scent.

A small slick emerged downwind of our drift. We were lined up perfectly to cast into the school but I had my doubts as to whether the trout would be able to find our baits in that horrible looking water. Wally removed any doubt when he doubled up with a nice 4-pound trout. Then one of the other guys caught another good one. Two more drifts and a dozen trout later we headed for the weigh-in with our best five trout. We ended up winning first place with just less than 19 pounds in really tough conditions. The moral of this story is that when all else fails go back to where you know the fish are and try to find a way to make them eat.

Choosing the right area then making the necessary adjustments as conditions (tides, wind, water clarity, etc.) change is the key to our success.  I should also mention that it’s important not to fall in love with one spot just because you had a great catching day there once or twice in the past. I see this happen quite frequently. Trout move a lot especially during warm-up periods. Spending a considerable amount of time on the water and using practical knowledge of the bay system in which we fish will help us determine the WHERE. Everything else seems to fall into place after that.