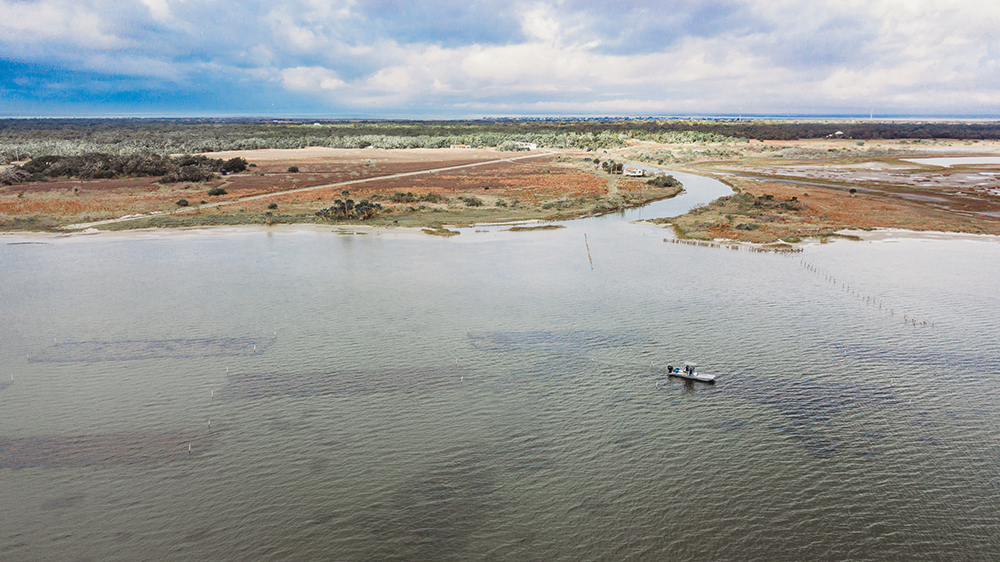 Oysters are an iconic part of life on the Texas coast, and Texans and tourists alike flock to seafood restaurants to enjoy plates of these briny bivalves. Although oysters have been long valued as a food source and a fisheries commodity, only recently have they gained recognition for the numerous ecological benefits they provide, including shoreline protection, water quality, and habitat for a host of other species. Because oysters are a target fishery as well as a critical habitat within our bay systems, they are uniquely challenging to manage.

Harvesting by dredges removes both oysters and their shells, reducing the size and complexity of reefs. Larval oysters attach to and grow upon the shells of older generations, so when reefs are physically damaged or removed, we reduce the substrate—hard surface—that is available on which to grow new oysters. Fortunately, Texas is one of the last places in the world where large scale oyster reef conservation and sustainable fisheries are still compatible. Protecting oyster reefs can help reverse oyster population decline and bolster fish stocks, benefiting the economy and the environment.

The economics for conserving oyster reefs are compelling: the estimated value of oysters in the water is $2,000-$40,000 per acre, which includes benefits of increased biodiversity and fish production, protected shorelines, and improved water quality[1]. Additional benefits of oyster reefs for recreational angling are estimated at $23,000 per acre[2]. In comparison, the value of oysters harvested commercially from a typical reef is estimated at only $880 per acre1.

Oysters help clean bay waters. Each individual oyster filters up to 50 gallons of water per day, removing phytoplankton, detritus, and other particles from the waters in which they live. This filter feeding also removes nitrogen, incorporating it into oysters’ shells and tissues as they grow, much like the plants in our gardens take up the nitrogen from the soil. While nitrogen is naturally occurring in our bays, excess nitrogen from stormwater runoff can create algal blooms and eventually lower the dissolved oxygen levels in the bay; uptake of nitrogen by oysters helps to combat this issue. This process has a real economic benefit: our research in the Mission-Aransas Estuary estimated the value of nitrogen removal provided by oysters as $300,000 annually[3].

Oysters build habitat that increases biodiversity and enhances fish production. Oyster reefs can provide 50 times more habitat surface area than the otherwise flat, muddy and sandy bay bottom. Numerous recreationally and commercially important species of fish, shrimp, crabs, and other organisms depend on reefs for nursery habitat or feeding, so the presence of healthy oyster reefs greatly increases both the abundance and diversity of other species. Further, the community of organisms that inhabits oyster reef is unlike that found in other coastal habitats like seagrass, marsh, or mangrove. Our team has documented measurable improvement in these habitat functions in local bays within just six months of restoring reefs.

The more that we study oysters, the more evidence we find to support the case for conserving oyster reefs to benefit the environment and the economy. If you have ever cast a line into Texas bay waters, you surely recognize how oyster reefs support recreational angling. The millions of small organisms that inhabit oyster reefs provide key prey for sportfish and promote better fishing for Texas anglers. Oyster reefs also serve as natural breakwaters that protect shorelines from waves, reduce erosion, and support the growth of marshes and seagrasses. And we are only beginning to learn about the role of oysters in capturing and storing carbon.

There are a number of possible conservation actions that can be taken to increase protections of oyster reefs. One strategy is to develop a sanctuary network for legacy oyster reefs in strategic locations where commercial harvest is prohibited, to allow source populations of adult oysters to grow, reproduce, and replenish reefs throughout the bay. Another is to provide permanent sanctuary status to restored reefs to protect those conservation investments. A third strategy is to incorporate measures of reef structure into management criteria in order to better gauge loss of reef habitat in addition to loss of market-size oysters. Alternative methods of oyster harvest being explored by the Harte Research Institute and partners, including supplementing dredging with oyster aquaculture, may also help maintain a long-term supply of sustainable seafood.

Opponents of limitations on commercial harvest activities from selected reefs argue that it will diminish the oyster fishery. Economic work at the Harte Research Institute indicates that, when protected, oyster reefs directly enhance recreationally and commercially important species to a degree that more than offsets the opportunity cost of incrementally reduced oyster harvest. Protected reefs yield larvae that nourish natural oyster reefs—including commercially harvested reefs—across a large geographic area, enhancing the productivity of those reefs. Protected reefs, whose physical complexity is not diminished by repeated physical disruption from harvest, also provide key habitat for commercially and recreationally valued species, ultimately bolstering those stocks as well.

Restoring and protecting select oyster reefs from commercial harvest may help to ensure fair access to this highly valued public resource. Such protections can also allow a more equitable distribution of the benefits that reefs provide to coastal communities, including enhancing environmental, community, and physical and economic resilience. Protection of reefs in strategic locations can reduce their recovery time following storms, enhancing their ability to buffer shorelines and increasing their value to coastal community economies.

There is compelling science that quantifies the numerous ecological and economic benefits that oysters provide, and the Harte Research Institute is committed to working with resource managers and all stakeholders to advance data-driven conservation strategies to ensure the health and persistence of oyster reefs in Texas.

Dr. Jennifer Beseres Pollack is Chair for Coastal Conservation and Restoration at the Harte Research Institute and Associate Professor of Marine Biology in the Department of Life Sciences at Texas A&M University-Corpus Christi.