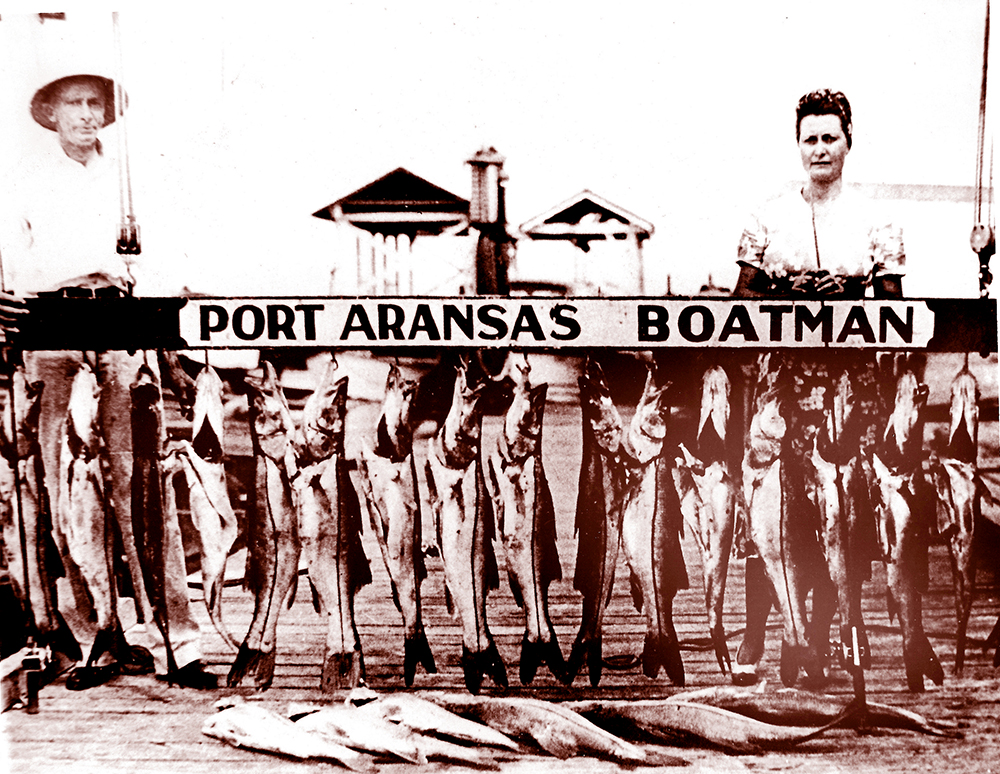 A serious catch of spawning-sized snook in Port Aransas in 1930 or so, back when they could be caught and sold commercially.

It’s been a while since I hooked a snook, a classy inshore fish that combines the strength of redfish with the ability to jump repeatedly. Smart enough to avoid many lures and if hooked, they are also powerful enough to use the nearest rock or fallen tree for shelter like some rock-friendly grouper. By comparison, redfish possess only one of those three traits.

I was reminded of this recently while cast-netting finger mullet. I’d left a rod set out with a live mullet on a circle hook and it suddenly bowed up and about 20 yards out, there was a big splash. Fortunately the rod was an Ambassadeur 6500 with 15-pound line, the heaviest outfit on the boat. The powerful fish pulled plenty of drag and headed for a nearby navigation marker, the only structure within a long cast. Alarmed, I turned the fish short, soon watching it cruise up and down the shoreline, shaking its head. We assumed it was a snook, because earlier we’d seen a big one pushing a v-wake along the channel’s edge like a small shark. Cruising right past our boat unafraid in the clear water, that sloping head profile and big lips were unmistakable. After a memorable fight my trophy was soon released; I couldn’t imagine keeping one of these fine fish. Marine biologists in Texas say they’re outnumbered by trout and redfish by at least a 1,000-to-one ratio.

Like seatrout, snook inhabit a wide variety of habitat. They’re content parked in sand potholes on grassy flats, channel edges, under piers and bridges, commercial and private docks, and red mangrove trees (which grow huge and dense in the Everglades). They also favor jetty rocks, or sunken wrecks in 30-or-so feet of water. The latter two habitats protects them from historic winter freezes.

Here in Texas, you would have to make a trip down to Port Isabel to even have even a slim shot at seeing snook on any given day when the water is reasonably warm. They shun cold water, by the way, and a serious winter freeze can be hard on the local population. With that said, a series of warmer winters seem to be expanding their range north even better than the red mangrove trees. Before getting knocked back temporarily every 20 years or so. The bad freeze last winter, according to Port Isabel residents, caused some smaller snook to perish, but the bigger fish seemed to come out okay. (Bigger and wiser, they must have scooted offshore or to deeper and warmer channels.) Months later, around late July, a local guide and his wife were said to have “caught the right tide, and landed 17 good ones using soft plastics.”

Often wary and finicky, these fish will sometimes go on a serious feed, especially when ganged up and spawning. I’ve seen video of what appeared to be a big Bertram anchored at the Palm Beach jetties in Florida, four anglers dropped live bait down and rapid-fire winching up 20-25 pound snook like so many bull redfish. They were using what we used to call snapper rods with Penn 4/0 Senator reels, which is pretty crude tackle for these noble fish. At least the heavy gear meant they were pulled up quickly, and released a lot quicker than light tackle, though all that catch-and-release probably wasn’t conducive to their spawning ritual.

Snook gather along that coast every Labor Day at the jetties to spawn, and they must be hungry during that time. Just north of there at the Stuart jetties, I’ve peered down during that time and saw a school of more than a hundred big snook. A friend who’d caught a bunch of Spanish sardines just offshore at a buoy, filled his live well, returned to the jetties and fought one big snook after another, getting hooked up every time he drifted by on an incoming tide, then fighting them in open water.

That spawning with fast feeding action might be the story behind this old black and white photo from Port Aransas (circa 1930 or so) where two anglers clearly crushed spawning-sized snook with only five-foot rods and knuckle-buster reels. That local population of snook (also tarpon and goliath grouper) really took it on the chin back in the day before bag and size limits, when anyone could sell their fish.

Today, populations of those three species are much depleted compared with historical levels. Texans who want snook can either wade or drift-fish the flats in South Texas, or probe around Brownsville’s channel docks. The latter option we did years ago with Capt. Gilbert Vela, catching 10 snook on a warm November night. All were dutifully released, though the same can’t be said for some shore-bound anglers with access to bank-fishing that channel.

Texans might consider a snook quest all the way down to Florida’s Southwest coast, south of Naples beyond the hedge fund-owned high rises, and jet ski tours through  mangrove creeks. Down further south to more primitive country bordering the Everglades coast, home of serious mangrove forests and tidal creeks, around the small town of Chokoloskee. This past summer, a friend and teacher from Arlington named Brandon Pope trailered his 18-footer there and had a time with local snook, also jumping eight tarpon and landing one, in the process losing $100 worth of lures. That’s dedication to fishing, while catching more snook in one trip than most Texas anglers might ever see.

A similar quest can be enjoyed around Port Isabel or Port Mansfield by picking a prime month, watching the moon phase and its tides, even fishing at night, and really focusing. While avoiding South Bay during nearby rocket launch days, when they somehow close South Bay. During such a trip it wouldn’t hurt to start off by fishing with a local snook guide, like Ernest Cisneros or Wayne Davis. Live finger mullet will certainly catch snook there, (although Ernest and Wayne fish lures only),  which might be a good idea if you haven’t used artificials much, which requires practice and presentation, quality tackle and setting the hook at the right moment.

For the lure-tossers, a few bait types have caught a great many snook, including both mullet and shrimp-imitations, but mostly mullet. Starting with shrimp, the DOA or other slow-sinking plastic shrimp are deadly and their single hook generally stays in a hooked and even jumping fish. The gold Johnson Sprite spoon certainly works, though its treble hook version is subject to being thrown when a snook jumps, which happened to me last summer; there was a savage boil, a startling jump and splash, the spoon sailed free as a bird, and a trophy snook was gone. A younger angler might have shrieked in despair at the tragic loss. At my age, well, you just sort of wince and go back to casting.

Other snook baits include “suspending plugs” like the Rapala X-Rap Twitching Mullet or Mirrolure’s MirrOdine family, along with others.

And then you have the soft plastic mullet imitators like jerkbaits, which are generally rigged weedless, or sometimes with a circle hook. Or the plastic “soft baits” like the DOA Baitbuster, an odd-looking bait that has caught countless snook, including my biggest ever years ago, a ponderous 40-incher if memory serves. These baits are really jigs that carry lead inside them for longer casts and probing deeper water down to 30 feet down under bridges. And let’s not forget the fly guys; they’ve caught many snook over the years, mostly using the Deceiver fly series.

If Texas can get by another 20 years without a big freeze, as it very well might, we should see more snook migrating up the Texas coast, at least to Matagorda and Galveston. Time will tell.