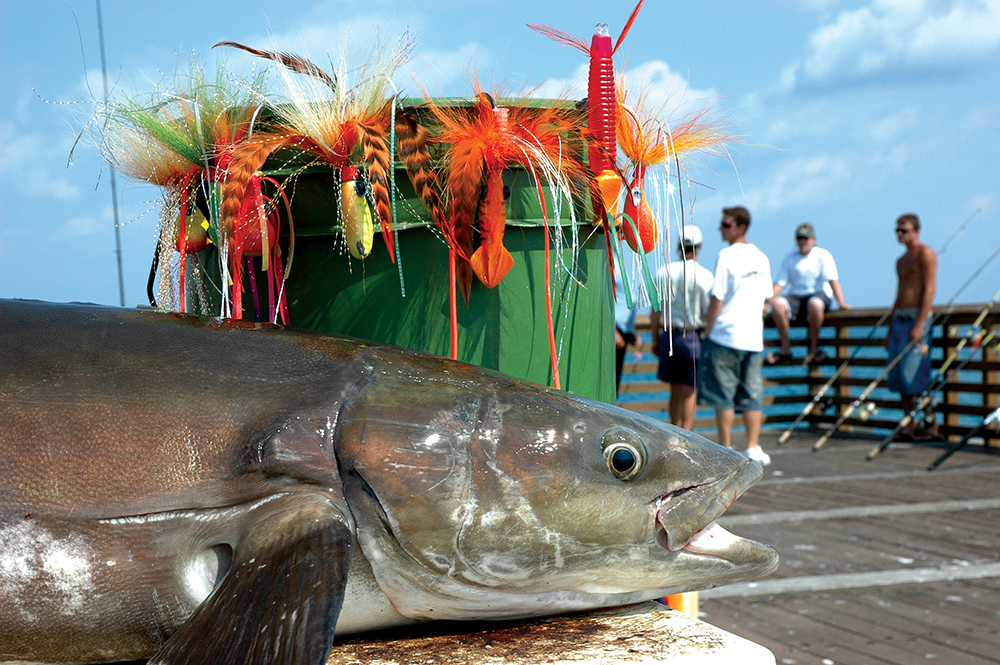 An array of cobia (ling) jigs on a Florida pier.

The word “jig” used in fishing today has pretty much become slang and covers everything from crappie jigs up to big, plastic, billfish trolling baits meant for marlin. Somewhere below the middle ranks are the common 1/4 and 3/8-ounce bay jigs, dressed in a variety of plastic tails in many designs and colors. And then there are the heavier offshore jigs, usually 2-3 ounces, dressed in mylar or natural feathers. There are even “heavy metal” jigs, sticks of metal up to a foot long, designed to sink very quickly down to 600 feet or so.

I’ve been a fan of jigs for more than 50 years, after my great uncle had me cooking lead in the front yard back in the 7th grade.  He didn’t exactly announce, “Today we cook!” but it was understood that we needed another hundred complete jigs, starting with the lead pouring process, then tying on a pinch of mylar tail, before dipping the head and thread wrappings in a mixture of white pigment and marine resin. The finished products were hung on a clothesline to cure in the back yard. This made for a tough paint finish that only multiple hits from mackerel could eventually crack. The jigs seldom lasted that long, however, because mackerel have seriously sharp teeth and many of our creations were cut off and lost. We wouldn’t use wire leaders, preferring 40-pound mono instead. While many were lost, countless mackerel were dragged aboard to feed the neighborhood. There were far fewer losses when targeting redfish and snook.

A few years came and went, and jigs with plastic tails became popular. By then I was in Port Arthur and during high school years, it was all about the Tout Tail jig with its 3/8-ounce lead head. What a great lure for its time...catching so many redfish, flounder and trout. There were no bag limits in those days, but we would need them soon enough. (By the early ‘80s we were using Kelly Wiggler jigs made in the Houston area and the lesser-known Chubby Shrimp at South Padre Island).

And there were the offshore years. Whenever I had a chance to visit South Florida, a company named Lead Enterprises was high on the list of stops to make. Back then it was in a tough neighborhood on the Miami River, and I wouldn’t doubt they filmed episodes of Miami Vice on the very same street. Inside the building were cauldrons of boiling lead; the place was quite hot in summer without air conditioning, except in a small, cooled room resplendent in finished, colorful offshore jigs. You could buy them wholesale by the dozen, roughly a dollar each. I favored 2-ounce arrowheads and 3-ounce spearheads. The tails were made of natural material, usually white. Like a kid in a candy store, I’d grab eight or 10 dozen and was set for a few years of offshore action. Snapper, ling and amberjack back in Texas soon “fell in heaps.” My best jig-caught fish was a 66-pound wahoo, caught off Galveston after I’d pinned a spearhead jig to a big ribbonfish. Tossed it way out there while we drifted over a snapper rock, and jigged it back to the boat. The rod doubled and 30-pound line melted off the Ambassador 7000 reel, so we chased that fish with the boat, finally catching up with it. That Miami company still cooks lead for a variety of products, but apparently no longer specializes in jigs. In Florida, there is lots of competition for that.

In more recent years for offshore trips, we’ve depended on the Snapper Slapper series of offshore jigs, made in Texas City. We’ve caught snapper up to 20 pounds with those jigs, and that’s big enough.

Back in the day when we graduated to offshore fishing, the 2- and 3-ounce jigs gave an advantage over other anglers. They were still using pool cue “snapper rods” and fishing a pound of lead on the bottom, with cut bait. Or drifting ribbonfish behind shrimpboats anchored offshore. With jigs we could wrestle amberjack until we were blue in the face, even while aboard the partyboats. While catching a 30-pound kingfish or two. And red snapper up to 16 pounds; they’d bite at the same jig repeatedly until hooked up; there were no missed strikes, lost baits and “wind it back in.” Using long, 8-foot fiberglass poles (Hurricane rods from Miami sold at Cut Rate Tackle, now Fishing Tackle Unlimited in Houston) was essential; you could sling a jig far from the boat, or lower the jig deep and work it back with big sweeps of the rod tip. We wore out Ambassadeur 7000 reels doing this and fighting fish, but at least those reels seldom backlashed.

At the same time, we carried trout tackle offshore, smaller Ambassadeur reels with 20 pound line, armed with 1/2 ounce jigs used for general purpose jigging around the oil rigs, catching all manner of fish, including ling, snapper, bluefish and Spanish mackerel. Around weedlines, that tackle was ideal for school-sized mahi and the occasional tripletail. One day, taking my 17-foot McKee craft about 35 miles off Cameron, Louisiana we tied up to rig WC-238 and caught something like 60 kingfish on this tackle, without using bait…

There are even smaller jigs for use offshore. How else are you going to catch small, live baitfish? The Sabiki rigs with their six tiny flies are the smallest artificials used offshore, though technically not a jig. Instead we used those same homemade jigs cured on the clothesline many years before; I still hoard a small collection. These were fairly light and we used 15-pound line that allowed us to horse fish away from structure. They caught all of our live baits offshore, used for enticing bigger gamefish that won tournaments. As a bonus, those same little jigs were also the only item that interested pompano that bunched up inside offshore platforms, located in 50 feet of water. Pompano also prowl outside the rigs when the current slows, but mackerel favor those areas and will cut off light line like a scalpel. Those same little jigs, maybe two inches long, were devastating when we located a big school of pompano in the Texas surf.

Back in 1942 or so, two fictional Miami charterboat characters, Capt. Crunch and his mate Des, created by local writer Philip Wyle for the Saturday Evening Post, were hired by the military to drift the Gulf Stream in a life raft, and compete jigs versus spoons, to see which could catch the most fish while using handlines. It seems that quite a few of our people during that time were finding themselves in life rafts for extended periods, and they needed to be equipped for survival. What fishing gear should be supplied on each life raft? I forget how the story ended, but I’m pretty sure that jigs won that competition.