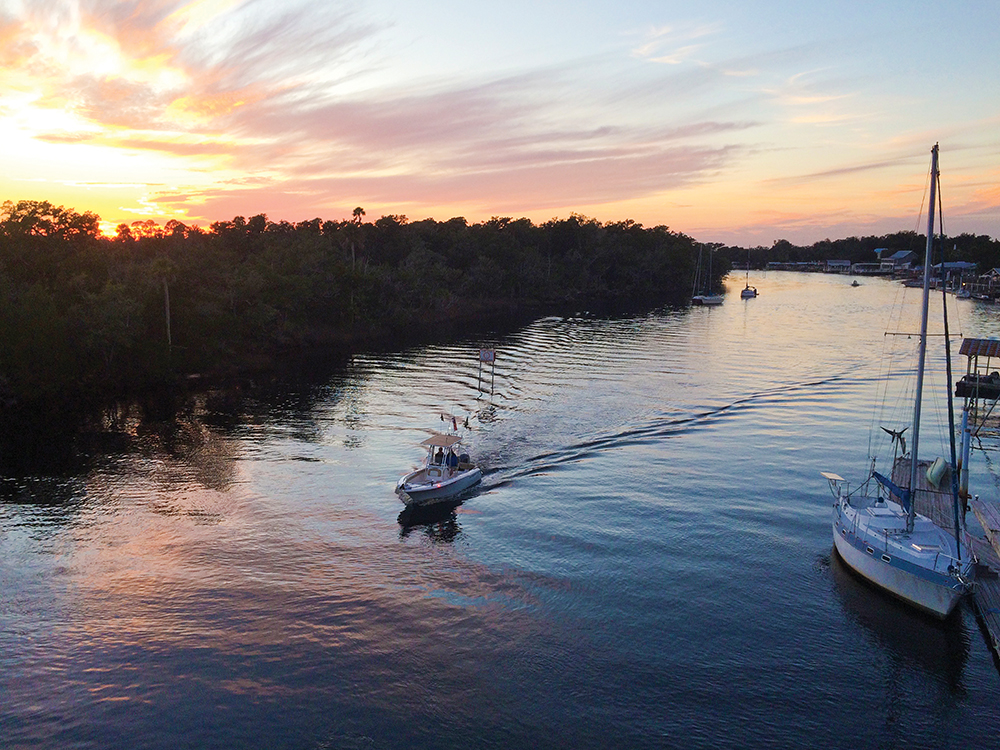 This town is located on the Steinhatchee River, which flows to the Gulf. A tired boat crew returns at sunset.

Years ago we made annual summer road trips while trailering boats, with our tow vehicles generally pointed at Florida. We used a motley collection of vehicles, whichever ran best at the time, even two Volkswagens pulling watercraft ranging from 14-foot johnboats and bass boats. (Not recommended in August with air-cooled car engines) Then we had a pickup truck towing a big 15-foot bow-rider that could carry three of us offshore. With 15 gallons of gas in that boat, we could run from Key West out beyond the Marquesas Islands, to sunken Navy target ships sticking out of the water that were full of fish. Lots of adventures, and I met my future wife Miss Amy on one of those trips. The guys with me wanted to explore new waters, without being confined to bridge and pier fishing.

I got to thinking about those road trips, after this past winter’s devastating freeze and fish kill in Texas. If there was ever a time for a road trip, it’s this year. Having spent recent time in Florida, I can recommend several spots around the state for those who have a wanderlust for clear and relatively calm water, compared to Texas. And no recent fish kills or red tides. Key West is a long haul from Texas and getting through Miami traffic these days is an adventure, since many residents there are…relatively new to the concept of speed limits, notably back home in Venezuela. On the other hand Key West this year doesn’t have cruise ships bursting with tourists, a huge blessing, and that alone might make it worth the trip.

However, our go-to spot these days is much closer to Texas, on Florida’s Coastal Bend, a town called Steinhatchee, one of a scattering of tiny coastal villages that remain quiet today. Picture Port O’Connor 30 years ago, except with a tall forest, black water creeks and 50 miles of consistent seagrass bottoms stretching out two miles offshore in 10 feet of water. No beaches to speak of; this is a low-wave energy coastline, but it’s not a bad drive at 10 ½ hours from Beaumont. You follow I-10 the entire way, except for the last hour.

These smaller Florida towns are Old Florida and have much the same character they did even 50 years ago, though a scattering of second homes have popped up.

As for the fishing: Though some boats range offshore for grouper, sea bass and snapper, the first two commonly caught in 30 feet of water, the big draw is inshore fish. Boats of all sizes drift over the grass and potholes, often using a drift sock if a breeze is blowing. Which doesn’t happen much during summer, where sometimes a breeze is prayed for. Overall, spring and fall seasons are best, though this May should still be good. Trout seem to ease offshore in the heat of summer, but last August we had no problem catching 20 slot redfish on a high tide shoreline.

Boats of any size are seen here and kayaks fairly common off the coast, exploring a maze of creeks where oysters or limestone rocks are found. These natural rocks stretch from Steinhatchee for about 12 miles south to the Pepperfish Keys, so caution is advised with navigation during even a medium tide, within a half- mile of the coast. Most boats stay a mile offshore, turn and then ease inshore to favorite spots.  The water is clear enough to spot the rocks, many of which have “kelp” attached that grows to the surface. More than a mile out the water is about six feet deep, where trout, large mackerel and packs of big ladyfish wear us out. Occasional 30-pound kingfish have been caught here in only six feet of water, also ling and tarpon.

Thanks to many miles of healthy seagrass growing in clear water, this area is easily the most productive for seatrout in all of Florida. The grass is so thick that it hosts millions of pinfish, and these are the go-to live baits used under corks. (Nobody in the area has ever heard of live croakers, so don’t bother asking). Live shrimp under a cork will work on trout, but pinfish dearly love shrimp, and they’re hungry as piranhas. The “pinnies” are available at marinas, but are easily caught with a 4-foot ultralight spin rod with 6-pound line. Bait up a ¼ inch square of fish belly on a “hair hook” (a long shank, tiny hook) with a small bobber and BB weight, toss it out a few feet upwind, and set that rod in a holder. Pinfish will do the rest. If the water is warm you’ll need a live well, or a bucket with aerator. Bring an adequate dip net to scoop pinfish; you don’t want to grope in a school of live pin cushions. I commonly set out a live pinfish hooked through both lips under a cork, way upwind while we drift, and that commonly catches the biggest trout or mackerel of the day. Sharks, too.

Most of our attention is focused downwind, slinging spoons and soft plastics or even topwater plugs. If there is much floating seagrass, topwaters are out. If the wind is cranking, it will line up the floating grass in rows like bowling lanes, and you have to fire off down the lanes. Early, late or cloudy days offer the best topwater action. Our go-to topwater plug has been the 4-inch Chug Bug in a variety of colors, except for the frog pattern. One year about May 1 we caught 10 species on that one brand, all in 4-6 feet of water. Even three undersized ling.

Summer is peak boating season, because Steinhatchee is the epicenter for America’s sport scallop harvest, fun for the whole family, with two gallons of shell allowed per diver. (I counted our two-person limit of four gallons last year and it came out to about 142 scallops, enough for several great pasta dinners). Scallops are picked up in three to about 10 feet of water, and even small boats get their limits. Years ago, we’d have the kids jump overboard and survey the bottom out to 20 yards or so, and report back with any scallops, before the adults suited up with snorkel gear. This is a relaxing endeavor, watching the fish and scanning potholes and grass bottoms for scallops. Instead of uniform turtle grass, look for a mix of potholes and a variety of bottom growth before dropping anchor. Or just head for the nearest cluster of boats, often there are 30 or more anchored in clusters in the best spots. And don’t worry about sharks—they’re well behaved in this part of Florida.

Seeing new waters and fish is worth the effort, and with today’s comfortable vehicles and boats, those tough road trips we made belong in the past.

Steinhatchee has a decent variety of restaurants and they’ll cook your catch. Our go-to spot for spending a few nights there is Sea Hag Marina, which has modern rental cabins across the street. They’ve been there at least 20 years and have all the facilities on the water, including a fully-stocked tackle store, live bait, boat launch (using a forklift), fish cleaning tables, beer tables overlooking the docks, resident fishing guides, the works. Also a fleet of 24-foot Carolina Skiffs with four-stroke engines that will haul at least six people out for a day of fishing or diving. The boats are a good deal, at $199 a day. They might even save the trouble of towing a boat from Texas. Their website is at: Seahag.com