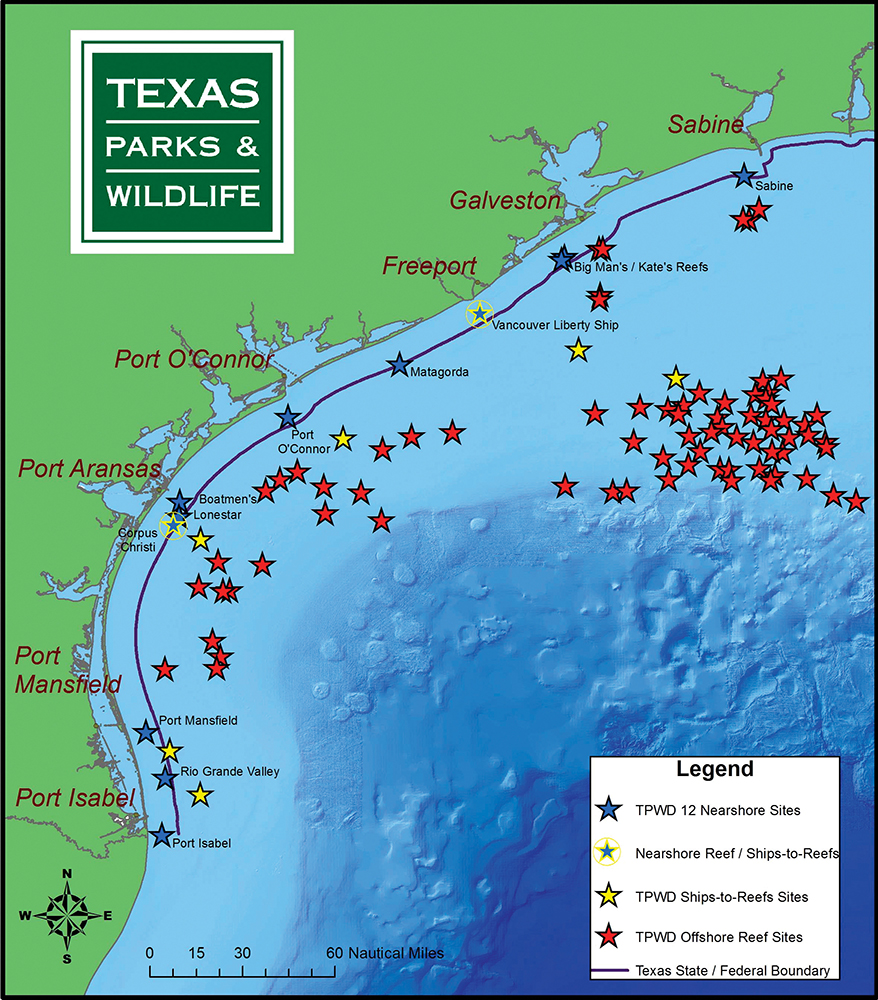 Just over 10 road miles, or nine nautical miles (NM), is all it takes for a Texas angler to access year-round saltwater fishing in the Gulf of Mexico. In this coastal area, you will find 12 nearshore artificial reef sites maintained and monitored by the Texas Parks and Wildlife Department Artificial Reef Program (Reef Program) (Figure 1). These individual reef sites are home to thousands of tons of reef materials, such as concrete culverts, limestone pyramids, railroad ties, and even marine vessels. These 12 nearshore reef sites can be found from Sabine down to Port Isabel in waters between 38 and 73 feet deep. Many of the reef sites are at least 160 acres; the Rio Grande Valley (RGV) Nearshore Reef Site, is one of the most recent and largest at 1,650 acres, Port O’Connor and Port Isabel are 381 acres, and Boatman’s and Lonestar, off Corpus Christi, are the smallest and oldest at 31 acres each. These reef sites allow fishing and harvesting of red snapper throughout the year, while the red snapper fishing season in federal offshore waters (more than 9 NM off the coast) is only open for 97 days.

As much of the Texas coastal bottom is mud flats and silt, the placement of reef materials creates new habitat, turning bare bottom into a cornucopia of reef associated species, and cryptic spaces for predator escapement of smaller fish species. Materials like vessels and pyramids (Image 1) are used at sites to provide habitat complexity, especially for juvenile and adult red snapper. Research shows that red snapper may reach a legal harvestable size between ages 2 and 5; fish of these size classes have been observed at Texas artificial reefs. While larger (and legal) red snapper are most targeted by anglers, juveniles are just as important to increase recruitment to the fishery, since early life-stage red snapper prefer low-relief habitat before moving to higher relief structures. To that end, low-relief habitat has been created at nearly all the nearshore reef sites by deploying reef material such as cinder blocks (Image 2), reef plates, concrete railroad ties, reef balls, and culverts, to create desirable habitat for juveniles and individuals in early life stages. Recently at the RGV Reef Site, post-settlement juvenile red snapper, only inches long, were observed on cinder block reefs. These snapper remained at the reef site and grew to harvestable sizes. Research has also shown that the deployment of reef materials can shift the fish species that are present. For example, before deployment of materials at the Corpus Christi Reef Site catfish and other bottom fish were dominant. Once materials were deployed, those fish decreased and there was an increase in commercially and recreationally important gamefish, such as, red snapper, gray triggerfish, Atlantic croaker, and even small Warsaw grouper.

One of the main goals of the Reef Program is to improve public accessibility to desired gamefish and provide recreational use at nearshore reefs. We accomplish this by partnering with numerous non-profit and private groups, and we actively seek external funding to create and maintain artificial reef habitats for desired gamefish. Over the years, the Reef Program has received $1.826 M in contributions from Coastal Conservation Association (CCA) Texas and Building Conservation Trust (BCT) to deploy material, including culverts, concrete pyramids, quarry blocks (Image 3), and vessels, at six different sites to build up nearshore reefs. In 2014, the Reef Program partnered with the Saltwater-fisheries Enhancement Association (SEA) to convert a previous cargo ship, the M/V Kinta S, into a nearshore reef off of Corpus Christi (aka ‘reefing’). Only a few months after the 155 ft vessel was reefed, one lucky angler caught a 33-inch red snapper. More recently, large-scale deployments at the Rio Grande Valley Nearshore Reef Site have been supported by the work and continued partnership with non-profit Friends of RGV Reef. This group has sunk two vessels and deployed over 10,000 concrete railroad ties and over 100,000 tons of other concrete material. On the eastern edge of the Texas coast off of Sabine, in 2018, the non-profit Friends of Sabine Reefs partnered with CCA Texas and BCT to reef a barge and 350 tons of quarry block at the Sabine Nearshore Reef Site. Beyond these partnerships, the Reef Program has received federal funding for creating and improving artificial reefs, including $400,000 for the RGV Reef Site and $1.5 M and $750,000 for Big Man’s and Kate’s Reef Sites off Galveston, respectively. The Reef Program also receives support from private individuals, including over $300,000 from a single family.

So, you may be wondering how you can get involved with the Texas Artificial Reef Program. Go fishing at one of our 12 nearshore reef sites – or plan to fish at all 12! You can get involved by enhancing and creating a reef of your own through the Public Reefing Program or joining a non-profit group that supports a local artificial reef site. Through the Public Reefing Program, any member of the public can submit a request for approval by the Reef Program to deploy their own reef materials. Guidelines and restrictions govern how this is done, but individuals fund “their own reef” that they can fish!

What are you waiting for? The 12 nearshore reef sites in Texas state waters are home to many fish, including red snapper, gray triggerfish, tomtates, and catfish, that are ready for you to reel in.

For more information about the Texas Artificial Reef Program or how to get involved, visit us at https://tpwd.texas.gov/artificialreef or email us at: [email protected]