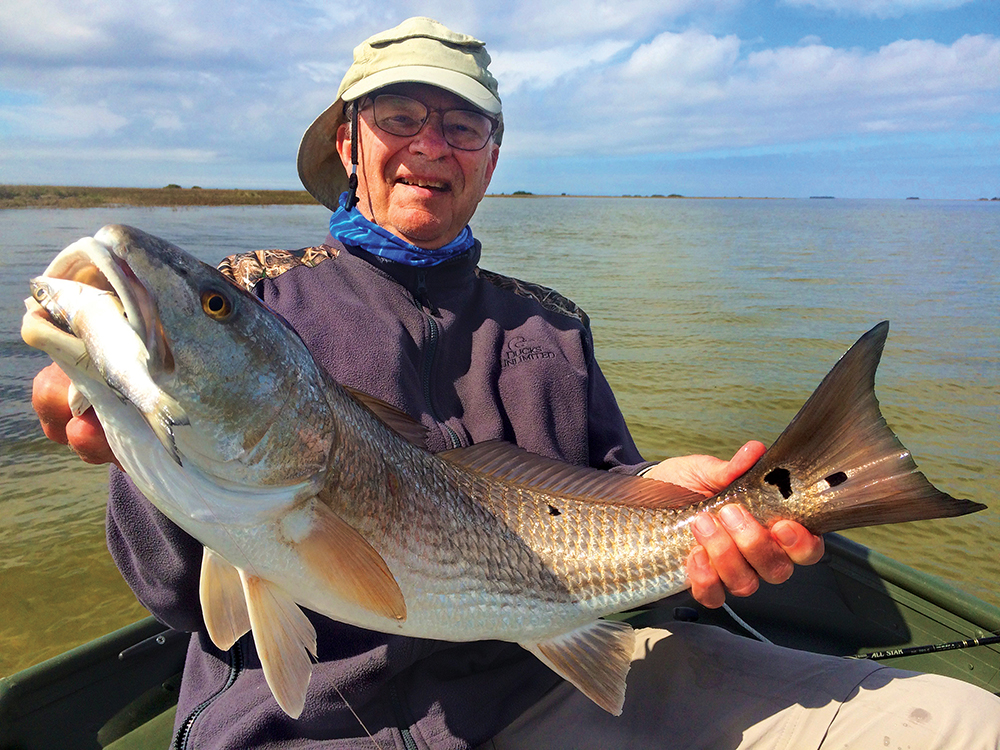 Happy angler in winter, with a 27-inch redfish caught from shore.

After the past year I’ve concluded that trout and redfish must prefer natural bait about a hundred times more than artificials. This was reached after countless sessions anchored on shorelines, where we slung out frozen finger mullet, live and cut pinfish, and sat back. Hooked and fought a great many fish, too. In late May and early June, we landed 105 redfish in four trips. Only eight or so were undersized, and two were oversized. That means a lot of mid-slot redfish, not from the jetties, but by making very long casts in four feet of water. Anglers in my boat who had never caught a redfish went home worn out. Especially after big stingrays and sharks arrived late for these parties, few of which could be stopped with 12-pound spin tackle. Or we’d break them off to save time.

These bigger predators running interference meant it wasn’t all gravy fishing, not during summer. We’ve learned to use up our live bait first, before resorting to cut or frozen bait. Those big devil rays pick up the scent of cut bait easier, and can bust up a good redfish bite, tangling lines and losing leaders. Sometimes our four rods become tangled or leaderless, and we don’t have a single bait in the water while the redfish are waiting.

I use thin, black Mustad Ultrapoint 6/0 circle hooks, and they make hooking and releasing fish easier. However, they’re left in the stingrays whether we work them to boatside, or not. I told people if they’re stuck with one of those foot-long stingers, it would ruin their  summer. They’re happy to let me deal at boatside with rays, sharks and catfish, so nobody has been hurt yet. Twice, 30-pound leaders have broken only feet away, with the barrel swivel flying back in the boat like a bullet. One hit the underside of my cap brim, and the other cut my finger an inch beyond the fishing glove. I stress everyone should wear protective eyewear in the boat.

Some of my clients have rarely if ever fished in saltwater. Some can barely turn a reel handle on a good fish. Recently, a teenager up in the bow was spooled and he stared at the empty reel, dumbfounded. From a distance, I wasn’t able to see how much line he’d had left.

Fishing in one spot, anchoring at the bow and stern (to keep my boat broadside to the fish) does have its downside. We have occasional boats crossing out front either idling slowly, drifting or using their electric motor. If someone ever burns our shoreline, they’re going to pick up 30 yards of mono wrapping their prop. These boats are combing a large area, inevitably tossing artificials. None of them ever seems to catch anything and they soon leave. During such times we try to look bored, disgusted or busy with lunch. Last week we had a double-header of redfish hooked up, when a boat appeared. We quickly pointed rods at the fish and even free-spooled them. This often results in lost fish and sure enough, we only landed one of the pair, but it was worth it.

In the midst of that redfish spree mentioned earlier, I’d pick up my favorite eight-foot Cabo rod and sling a shiny gold spoon way the heck out there where the action was going on, but never got a hit. I didn’t think that was possible, especially in clear green water. Meanwhile my 7-foot All-Star rods using bait, were doubled up with fish. I stay anchored on that shoreline, out of the wind, so the fish have no clue we’re there. There is no slap-slap of a boat hull on even the smallest waves. I later tried anchoring out there closer to the fish, where we wouldn’t have to cast so far, but couldn’t get a bite.

On that same shoreline we’ve also caught some outrageous trout while using bait. The most recent was 27.5 inches long, caught on a large pinfish that survived about 10 seconds. I hadn’t even trimmed its prickly fins with scissors, either. It made me wonder how many years that big black female trout had dodged or ignored artificial baits, before scarfing down my pinfish. Maybe eight years? It was a strong trout that bolted like a redfish and pulled plenty of reel drag. The circle hook was nicely attached at the corner of its jaw and you can bet that fish was easily  released. In two feet of water, we could watch it revive for a little while before heading back out to deeper water. It wasn’t the classic MirrOlure-caught sow trout caught from surf or jetties that I prefer, but an impressive fish, regardless. May it lay a million eggs each year, which they’re capable of.

In previous summers we’ve set out baits while Amy stood on the bow with some elbow room, stroking one redfish after another with her gold spoon. The fish were obviously hungry during those tides, but this year with spoons, it’s only been an occasional fish. Maybe they’re getting plenty to eat this year, but can’t resist a natural snack.

Another advantage of shoreline fishing is that when my people get restless (mostly young guys) they can wade and throw spoons, and it’s obviously a plus for their day if they wade and catch a red on artificials. Another plus is their absence creates more room in the boat. But they have to be adept, keeping the rod tip high, keeping the spoon above that grassy bottom, and set the hook (firmly!) at the right moment. It’s a risk to my reels, because people usually wind in too much line, and if there is grass on the spoon, they strain to reach and clear it off, while the reel is way behind them, dangling only inches above salt water.

Obviously, poling the flats and sight-casting artificials at tailing fish is the ultimate inshore experience, and advanced anglers prefer it. The fly guys seem content to work all day for only one or two fish. Some of them might even think catching trout and reds with bait is bogus and sad. However, the vast majority of the public are happy enough to catch these fish any way they can. For my situation, a couple of fish each day is no good; I prefer a slug-fest where people are worn out by day’s end. That’s not going to happen often, when they’re handed a rod with artificial bait. Real bait works, which explains the huge popularity of live croakers and shrimp as bait, which provides serious income for marinas that have access to bottom-trawling shrimpboats. Many guide boats carry four passengers, and having that many people slinging lures all day often could mean a clashing of rods, or a snagged angler headed for the ER.

Our go-to spot in Port O’Connor, while fishing with husbands, wives and kids, was always the big jetties. I didn’t buy croakers, but caught my own finger mullet or bought live shrimp. Anchor in 20 feet of water, fish straight down like you’re snapper fishing, and reel up slot redfish. If the tide is moving, which some days it just won’t. Thousands of redfish have been taken at those jetties, and there are guides who solely fish there. Some no longer use local bait, instead buying boxes of snapper bait, such as sardines and cigar minnows. They use baitcasting tackle with 20-pound line, which is ideal with so many cruel rocks and snags waiting below. (No country for spin tackle). There must be tons of lead wedged down in those POC rocks, and quite a few anchors, exceeded only by the Galveston jetties.

Where I fish in shallow water, we don’t lose tackle at all on our long casts, except for the darn stingrays and sharks. As coastal waters warmed up this summer, it was the price we paid for catching so many fish with bait.