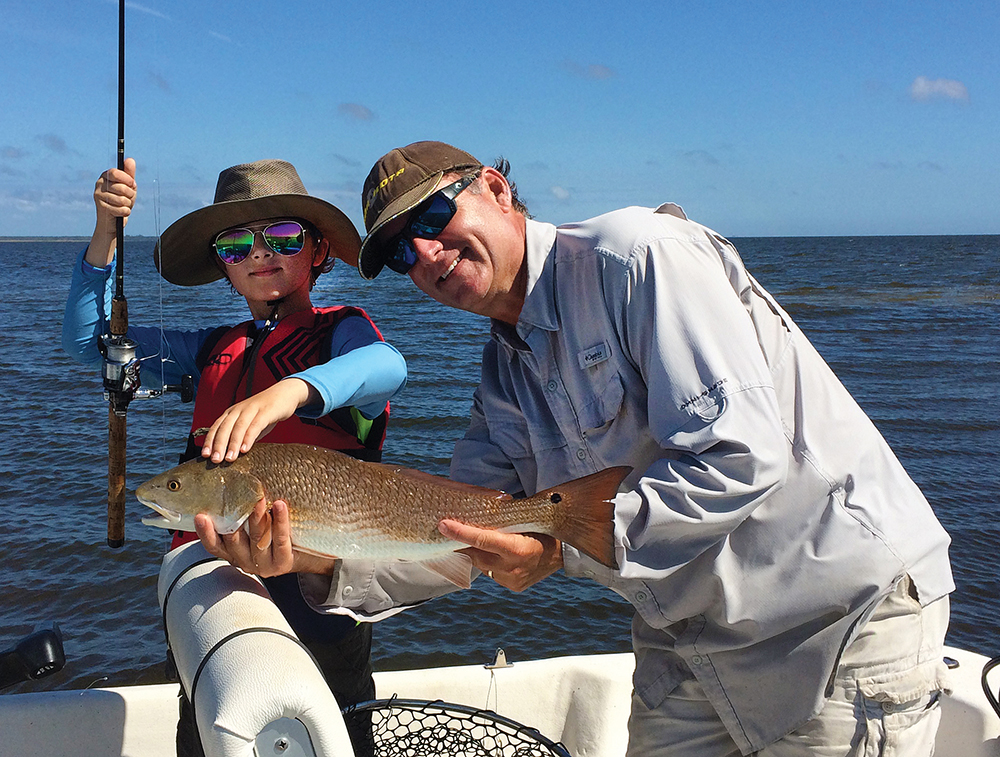 Jubilant friends who recovered a rod pulled overboard, plus the culprit.

Deciding which tackle to use for a fishing trip should not be taken lightly. Most charter captains prefer their clients use charter tackle, and for good reason. I’ve had clients bring aboard their own tackle, some of it quality and other times, not so much. They might bring a favorite rod, while others want to research my boat and tackle before making or buying their own. Recently I had a few kayakers on board, they wanted a bigger boat and were tired of the proverbial wet butt and a hungry gut.

They climbed aboard with an assortment of bay tackle that at first glance, might prove suitable for redfish and trout. However, we started off with lures that morning and their gear didn’t quite work out. Despite numerous taps and fish sightings, they struggled to hook mackerel, trout and even ladyfish. Several guys set their tackle down and tried my longer rods for tossing plugs. (Later that day, their short rods using bait and circle hooks did perform better on redfish and black drum).

During our second drift, I watched them more closely and was reminded of a scene in the movie Platoon, where Sergeant Elias goes through the rookie’s rucksack before the next patrol, digging out and tossing aside items that would hinder the job. Poop-can this and get rid of that, etc. Except Elias didn’t say poop. (Nor did anyone else in the movie.)

We were pitching spoons and the fish often followed their lures back to the boat without grabbing on. I noticed each guy was using a store-bought wire leader about eight inches long, with a sketchy snap swivel attached to each spoon. I let them know that trout really don’t like wire leaders. But then ate a bite of crow when a mackerel bit my spoon off; the 20-pound fluorocarbon leader looked like a razor hit it. I upgraded to 40-pound fluro, which is a more difficult chew for most mackerel, except for the big ones.

(A month later I learned a painful lesson when six big mackerel, at least five pounds each, flashed in clear water as they cut off six precious spoons. They bit through 40-pound fluro like it was wet pasta, the worst cutoff/landed ratio of mackerel I’ve ever seen, going 0 for 6 that day against tournament-sized mackerel. And that many great dinners, too).

We kept casting. Their rods were short, some of them only six feet long, the shortest I’d seen in a while. Out there on the bay or surf, a rod should be a minimum of seven feet long. For such work I now prefer a carbon, medium-heavy action 8-foot spin rod; a sweep of that rod will really work an artificial or set the hook. My favorite is a Cabo rod that can be worked for hours without arm fatigue. The greater length makes for long casts and the spin reel never really backlashes. They’re a hassle when transporting, which is why most of my outfits are seven-footers. Soon enough, the guys were reaching for my longer rods.

We were in a 24-foot Carolina Skiff with lots of room, so I let them keep casting during the first half of the day. Many guides won’t tolerate four people slinging lures at close range. Jigs maybe, but not spoons with treble hooks, much less plugs. I’ve fished with a number of guides and often, couldn’t find a single lure on their boats. Odds are fairly good that someone in a crowd can get snagged, which can be a game-changer for the day, or maybe not. Everyone knows the nearest Doc-in-the-Box is far away, and the captain should be given a chance to snatch a hook out of someone, depending on where the hook is buried. My guys were careful with their backswings, though there were several near misses. One more reason to wear wrap-around sunglasses.

Eventually, they switched to using three of my rods. One of the guys grew rather attached to an eight-foot spin outfit and he seemed to enjoy making long casts with little effort. That, and the serious curve that developed when he was “bowed up” with a good fish.

After plugging each morning, I often anchor on a spot that still requires long casts, as far as a one-ounce weight can fly using seven-foot rods. The eight-footers delivered baits way out there, especially when the breeze was behind us.

Between all our tackle and their common sense, sea duty experience with kayaks, we racked up a  collection of fish that day, including seatrout, redfish, black drum, Spanish mackerel and big ladyfish. Next day we headed back for more. Everyone by then had narrowed down their tackle, extraneous gear left behind in their bunks. Their preferences were clearly known by then, and we had an even better day with the fish.

As mentioned last month, the right fishing line is also crucial. I use 12-pound mono line for just about everything in inshore waters. Not soft line, but something hard like Ande or the more readily available Berkeley Big Game. My guests were using a mix of mono and braid lines. They weren’t sure about the braid, either 30- or maybe 50-pound line; they forgot. One guy had 20-pound neon green mono line, age unknown. One of their reels carrying braid was soon knocked out of action when it developed a permanent wind knot 25 yards from the lure. That was okay, we had extra rods on the boat. In fact “rod clutter” was something of a problem. Once anchored in calm water I laid a clump of rods in the motor well, sticking out over the water to save deck space. In addition, rods in the vertical racks on the center console were at risk of getting chopped in two from a serous side swing cast, so they were taken down out of harm’s way.

(A South Padre guide told me years ago that he had five graphite rods cut in half that way by a client who, back at the dock, forgot to pay for the damage and sped off in his car. A sheriff’s deputy caught him coasting down the far side of the bay bridge and brought the guy back to the marina to settle up on damages. Maybe they let him plea bargain…

Once home, I wouldn’t doubt those guys went tackle shopping. I hope so, anyway. It was evident that on a big expanse of water, a short rod with a pistol grip handle and baitcasting reel isn’t much better than the pushbutton Zebcos I felt fortunate to have back in the seventh grade.