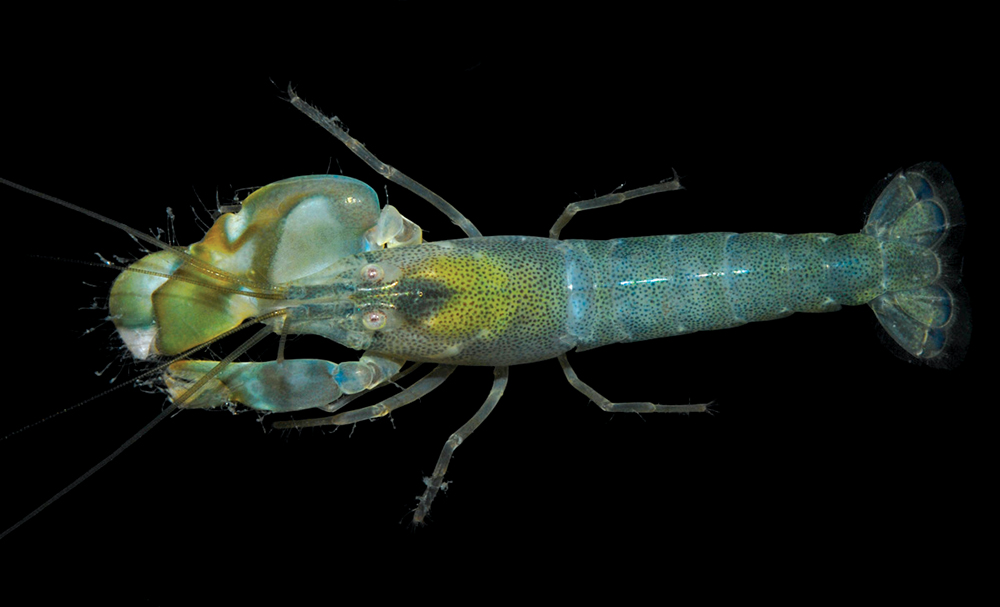 Bigclaw snapping shrimps, Alpheus heterochaelis, are the largest of all the snapping shrimps. Adults can reach up to 2 inches in length, but most are often considerably smaller, around only half an inch. Males and females reach approximately the same size. Coloration ranges from dark, translucent blue-green to gray. Most have orange and blue tipped uropods (tails), orange on the top of the head, and also on the larger claw. Their entire body is speckled with darker gray-brown spots. The rostrum (the spine on the head) is small, and the carapace (shell) is smooth and spineless. The most defining trait of bigclaw snapping shrimp, by far and not surprisingly, is their large snapping claw, which is also the only sexually dimorphic trait, the male’s being slightly larger and broader than the female’s. The snapping claw can be either the left or right claw, and its length is nearly half that of the body. The opposite paired claw is a normal, unmodified claw. Both are covered in setae (hair-like bristles that function as sensory organs, similar in function to a cat’s whiskers). Curiously, no auditory organs have been discovered in bigclaw snapping shrimp. It is believed that mechanosensory and chemosensory reception are the primary forms of perception in this organism, particularly important with intraspecies communication.

Native to the western Atlantic Ocean, particularly the Gulf of Mexico, this species is frequently found from North Carolina to the southern tip of Florida, as well as the coasts of many islands in the Caribbean, and as far south as the Brazilian coast. Bigclaws are a benthic species inhabiting a variety of shallow marine habitats and typically residing within some manner of protective structure. They are common on reefs and oyster beds, in and around seagrass beds, and in salt marshes and mudflats. The majority of populations are found on the bottom in subtidal waters, to a depth of 100 feet or more. They have a wide tolerance of salinity concentrations, inhabiting waters that range from mesohaline (5-18 ppt) to hyperhaline (>40 ppt) salinities.

The most well-known and studied behavior of bigclaw snapping shrimp is their ability to create loud pops with their modified pistol claw (so named because the smaller pincer of the claw cocks back like the hammer of a pistol). These pops are used in intraspecies communication and for hunting prey. The phenomenon is accomplished through the physical process of cavitation: the rapid formation and implosion of cavities in a liquid, in which the pressure of the liquid falls below its vapor pressure.

The basis for snapping shrimp sound production was discovered in 2000. Rapid claw closure emits a high-velocity jet of water, the speed of which creates a microscopic (but expanding), extremely short-lived cavitation bubble. As the pincers snap together, a zone of intense low pressure forms around the shrimp's claw. Any small air bubbles in the vicinity expand from this change in pressure, and join together to create one bubble. But when the bubble moves far enough away from the claw, and encounters a huge disparity in pressure between the water outside and the air inside, the bubble collapses under the strain, exploding into a shower of tiny bubbles. This growth and collapse happens in less than one millisecond [a thousandth of a second].

As revealed by high-speed videos, when the snapping shrimp's claw closes, the plunger on one pincer is forced into the socket on the other. While the claw is open, the shrimp contracts opposing muscles to ratchet up the tension. When it suddenly releases this tension, the pincers snap shut at nearly 63 mph. But at this point – silence, barely a murmur as the two pincers snap together. The characteristic popping sound actually comes a fraction of a thousandth of a second later – a small but significant delay – and is produced by the rapid, violent collapse of the cavitation bubble.

A further study of this phenomenon revealed that as the snapping claw cavitation bubble collapses, a very short flash of light is emitted. By placing the shrimps in complete darkness and using a highly sensitive photodetector, it was shown that each bubble collapse coincides with the production of 50,000 photons. To the human eye, it’s dim, practically imperceptible. But it is extremely hot and high pressure, reaching temperatures that matched the surface of the sun, albeit very briefly and in a very small place. These high pressures and temperatures can stun or even kill prey if they are within a few millimeters of the tip of the snapping claw.

Bigclaw snapping shrimp are omnivores and feed on a variety of small marine animals including small fish, worms, crustaceans, shellfish, and other marine invertebrates. They’ve also been observed grazing on algae in laboratory settings. Most of their food is obtained by ambushing their prey with their snapping claw. Although they have not been established as an essential food source for any organism, bigclaw snapping shrimp are the prey of many larger fish, including speckled trout and redfish. The larger size of these fish nullifies the effects of the shrimp’s pistol claw. In some areas, bigclaws form mutualistic relationships with other fish, particularly gobies. The gobies benefit by living in burrows built by the shrimp, and the shrimp benefit by using the gobies as a predator detection system, which they access through an antennae/tail connection with the goby.

The primary means of communication between snapping shrimp is the pistol claw. They use both the snap frequency and the speed of the water jet to communicate intent. Bigclaws are a very territorial species of snapping shrimp, with many means of exhibiting territorial defense. Since they frequently have adjacent territories, intrusions occur quite often. When these interactions occur, they usually begin with a face-off between the defending male and the intruding shrimp, whether it be a male or female. During this face-off, both shrimp snap their modified pincer and touch antennas. These warning snaps are not life-threatening to either shrimp, as they aren’t powerful enough to create a cavitation bubble; they just shoot a jet of water. The result of the face-off depends on two circumstances: 1) the sex of the intruder and 2) the relationship status of the defending male. If the intruder is a male, one shrimp will become dominant and the subservient shrimp will retreat. For the defender, this may mean abandoning his territory if he loses. If the intruder is a female, but the male already has a mate, same result. However, if the defending male is single, and the intruder is a single female, the two will often form a monogamous pair. It is thought that shrimp can determine the sex of an opponent based on the warning snaps, due to the fact the males produce more “aggressive” snap frequencies and jet speeds. Chemical signals may also play a role in sex determination, as well as territorial marking.

Despite their tendency to be heard and not seen, field sampling studies indicate that bigclaws are often the numerically dominant decapods within their preferred habitats. Field recordings of snapping noted an increase in pops at night; not surprising since bigclaws spend most of the day under cover and are more active at night. Another study revealed a crepuscular rhythm in which snapping shrimp sound production peaked shortly after sunset and again shortly before sunrise. Though snapping activity declines during the day, it doesn’t disappear. This is likely reflective of the multiple roles of snapping behavior (hunting prey, defending territory, and other intraspecies interactions).

Like most snapping shrimps, bigclaws are monogamous – primarily because of mate guarding by the male. Females are only receptive for a few hours immediately after molting. Their molting cycles occur every 3 to 5 weeks, but are rather unpredictable. Mate guarding is advantageous to the male because it maximizes mating opportunities, and also to the female because it minimizes the need to search for a mate during the vulnerable soft-bodied receptive phase. Between mating times, the male provides protection for the female. Total brood gestation time from laying to hatching is approximately 28 days. Eggs and larvae are predominately cared for by the males. Though the female shrimp is never absent during the larval development of the hatchlings, male shrimp are more aggressive territorial defenders, and this territoriality causes the males to be more protective of the developing larvae. This species is unusual in that it exhibits an abbreviated larval life cycle consisting of just three larval stages, which lasts, in total, just 4 to 5 days. All larval stages are non-feeding, the young shrimps relying entirely on yolk and oil reserves for nutrition during this period. They molt their exoskeletons during larval development to grow. After the third stage of larval development, they enter the post-larval stage and resemble adult shrimp without the modified pincer. Only adult shrimp have the pistol claw. After larvae are fully formed, parental protection and care ceases. Although bigclaw snapping shrimp are known to be sexually mature after their post-larval stage, an exact age of reproductive maturity has not been determined. They can live up to 4 years in the wild, though in captivity they tend to reach only 2 or 3 years.

Bigclaw snapping shrimp interact minimally with humans, whether intentionally or inadvertently. They are sometimes kept in home aquariums and are exhibited in many public aquariums. Some other species of snapping shrimp live in colonies. Areas where snapping shrimp occur at high densities sometimes cause interference with ship sonar capabilities. The loud pops made by the firing of the modified pistol claws of high-density colonies rival the sounds of sperm and beluga whale calls. Between 1944 and 1945, the US Navy deliberately used snapping shrimp colonies as an acoustic screen to hide from the underwater hydrophones in Japan's harbors, allowing their submarines to enter undetected. The conservation status of bigclaw snapping shrimp has not been evaluated. Although their abundance has not been extensively studied, there is no known danger to bigclaw snapping shrimp, and populations are regarded as stable.

Where I learned about bigclaw snapping shrimp, and you can too!