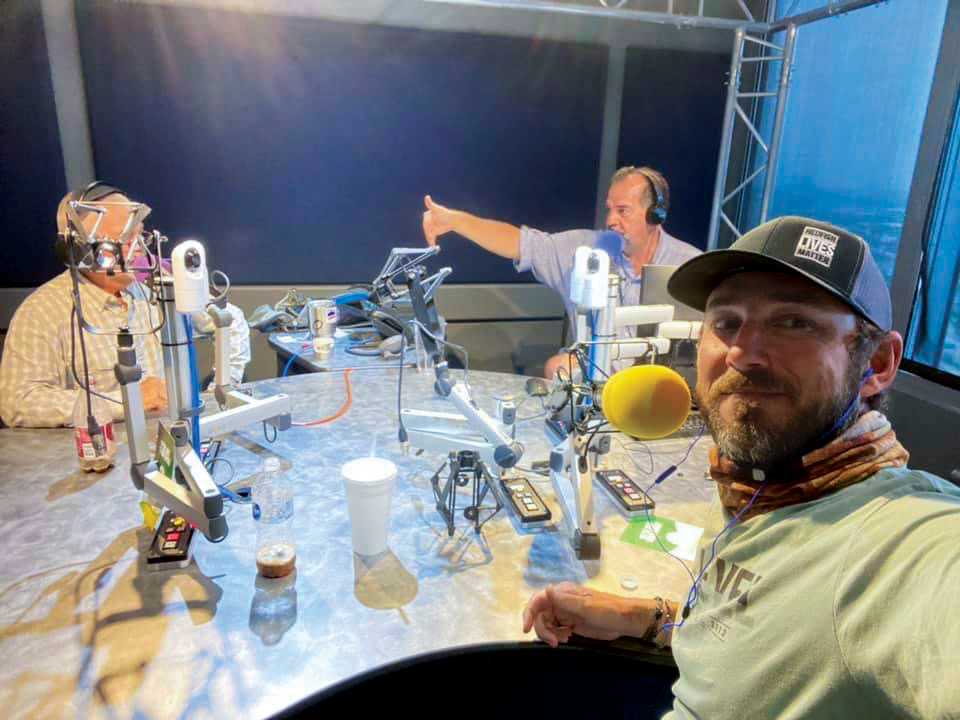 A couple of years ago I was approached by John Lopez about doing a podcast on saltwater fishing. John is a longtime Houston sports radio personality on 610 AM and the station wanted their guys to start doing podcasts in addition to their on-air shows. John is also eaten up with saltwater fishing. Y’all might laugh, but the first order of business was to explain to me what the heck a podcast was. I had heard of them and knew there was an app on my iPhone for podcasts, but I didn’t know how they worked.

Once that hurdle was cleared, John clued me in to his vision for what the podcast would be. He wanted to just sit down and talk fishing for an hour every week. Locations, techniques, fish biology, how weather affects fishing, lure selection, etc. The same things we all talk about when we’re on the boat or just hanging out with other fishermen. Bite Me - A Saltwater Fishing Podcast was born. I honestly figured we would run out of things to talk about within about six months.

Well, here we are twenty-six months later with a new show every week and we’re still going strong. It has been a fun ride. During this time we’ve built a very cool community of fishermen.  While it started with us simply coming up with our own topics along with the occasional email question from a listener, it has evolved into an interactive show. The addition of a Facebook group has opened up a never-ending supply of topics. Everyone from the raw beginners to the knowledgeable old salts are welcome…so long as you are willing to help without judgement.  That has been our motto from the start and it has served us well. The Facebook group is pushing 4500 members and the most recent numbers show over 30,000 downloads per month.

This experience has really opened my eyes and reminded me that there are a lot of people out there who really want to learn about fishing and don’t have the sources many of us have taken for granted. Not everyone has a parent or other family member to teach them. Many people didn’t grow up fishing and come into this sport as adults. Some don’t find time in their busy life of careers and kids until they are retired. Still others have been relocated to the coast from landlocked states and are transitioning from freshwater to the salt.

Their passion to be a better fisherman is just as strong as those of us who have been going at it since childhood, but their availability to resources where they can ask questions is often limited.  I was fortunate to grow up with parents who loved to fish and it sparked my fire at an early age.  As a teenager I worked at Marburger’s Sporting Goods where I was surrounded by seasoned fishermen. Many of them invited me to fish with them and were willing to share their knowledge.  Some were guides who took me out to scout on their days off while others were just old salts with many years of experience. I also ran with a bunch of young guys with like interest and we learned from each other, often through trial and error. We learned as much from our failures as our successes.

One thing John told me when we started this was, “You don’t know what all you know.”  Sounded odd at first, but now I get it. There are so many things that we have picked up over the years of doing this that we take for granted. It is all knowledge gained through friends, mentors, studying, or simply time on the water. All of these experiences and lessons added together are what make us above average or even great at what we do. You weren’t just born with all of that coded into your brain.

We get questions every day that seem so basic and obvious to me, yet someone out there doesn’t know. It isn’t that they aren’t intelligent, it is simply that they have a hole in their knowledge. A personal example would be dealing with computer issues. I have a basic working knowledge, but that’s about where it ends. My wife and oldest daughter have more advanced knowledge and often kid me about it. My response is to let them know that while I may not always know how to transfer a file from one program to another, I can build an entire house. I know framing, plumbing, electrical, and finish work. They do not.

When I first started guiding I was often surprised when someone didn’t react to a cue that seemed very obvious to me. Signs of fish activity or just situations that called for a cast went ignored. A windy point with water being pushed around it will always get an exploratory cast from me. I know there is a small eddy behind that point where a gamefish might be lurking while waiting for a baitfish to get pushed around the corner. It has worked for me enough times that it is now second nature, I don’t even think about it. I regularly have clients fail to notice or react to much more obvious signs than that. Shrimp scattering in succession along a shoreline, a small shower of baitfish or the reflective flash of a gamefish swiping at bait all deserve a cast but don’t always get one.

My response is not to just shake my head and think less of the guy on my bow.  Instead I suggest a cast and then explain why. I don’t want to be that guide who just tells their client to cast to a spot with no explanation as to why. Or worse, the guide who assumes they should know and doesn’t even suggest making a cast. And you don’t have to be a guide to help out a fellow angler. If the guy fishing with you is missing something tell them about it. You never know when he might return the favor. None of us know it all and should be willing to accept knowledge when someone is willing to pass it along.

So what is the point of this collection of words? We all have our strengths and weaknesses.  Take this as a reminder to share your knowledge without looking down on the recipient. They likely are experts in some subject that you have no clue about. Also, if you are on the other end, look for mentors. Sure, we can learn most everything from watching YouTube videos these days, but I think directly learning from someone trumps that. When you are standing waist-deep next to your buddy and he is whipping your butt with a topwater you can ask questions and observe what he’s doing differently. That interaction is more effective and sticks better than trying to figure it out on your own after watching a video or reading an article.

In the end this obviously benefits the recipient, but it also rewards the teacher. I get great joy from seeing that lightbulb come on and watching them be successful.