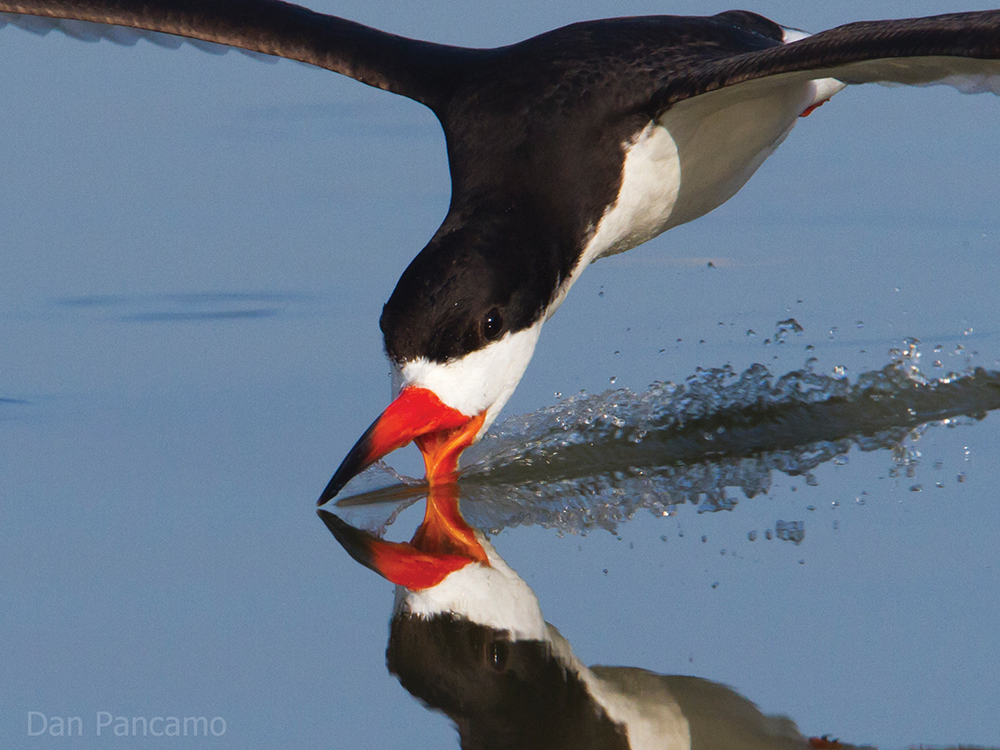 The black and white livery, the beak formation, and the excited barking voices of the skimmers all combine to make one think of aerial beagles hot on the scent of aerial rabbits…The skimmers themselves are unreal and unworldly birds, with their impractical looking forward ends, the peculiar lightness of their lilting flight, and the calls that sound like dogs baying in a dream.
~ Robert Cushman Murphy, Oceanic birds of South America (1936)

The black skimmer, Rynchops niger, is one of three very similar bird species in the genus Rynchops in the gull family Laridae. The genus name Rynchops is from the Ancient Greek rhunkhos, meaning "bill,” and ops, meaning "face.” The specific niger is the Latin word for "black.” It has acquired many common names in North America, including scissor-bill, shearwater, seadog, flood gull, stormgull, razorbill, and cutwater. Skimmers are highly modified tern-like birds. They have exceedingly long wings and a distinctive bounding flight style. The black skimmer is the largest of the three skimmer species. It measures 16-20 inches long with up to a 4-foot wingspan and weighing in at 7.5 to 15.8 oz, with males averaging about 12.3 oz and females at 9.0 oz. The plumage is starkly black above and bright white along the wing edge and below, with a black/red bill and orange/red legs. This striking combination makes them easy to spot as they loaf on the beach with other shorebirds. Juvenile skimmers, by contrast, are mottled brown and black on top and off-white underneath, and the legs, feet, and base of the bill are dusky-red. Skimmers have small eyes that are rather hidden in the black head feathers, so that it almost looks as if they have none. Unlike most birds, they have cat-like vertical pupils, narrowed to slits to cut the glare of water and white sand, and allowing for better vision during times of low light. Their most prominent morphological characteristic is the compressed, blade-like bill, in which the lower part is noticeably longer than the top, sometimes by as much as an inch. This unique feature is an evolutionary adaptation to its feeding and foraging behavior.

Black skimmers have a large range. In North America, they can be found on the Atlantic, Pacific, and Gulf coasts, and occasionally on inland lakes in Florida and California. They favor coastal waters protected from open surf, such as lagoons, estuaries, inlets, and sheltered bays. In South America, they occur virtually throughout the continent. In the Caribbean, they can be seen as far east as the Virgin Islands and Grenada. Individuals from northern North America migrate to the southern US and South America or the Caribbean for the winter, while individuals from southern South America may migrate farther north to Costa Rica.

Skimmers feed by opening the bill and dropping the long, narrow lower mandible into the water, skimming along until they feel a fish – hence the common name. When the bill contacts a fish, the bird quickly bends its head forward and reflexively snaps its bill closed, whipping the fish out of the water. Since skimmers rely on touch, not sight, to capture prey, they can feed during dusk, dawn, and even night. This method of feeding is called tactile foraging. The world’s three species of skimmers are the only birds on Earth that regularly feed in this manner. Their diet is mainly small fish that venture too close to the surface, such as minnows, killifish, and herring, though they’ll also eat shrimp and other small crustaceans and very occasionally forage by wading in shallow water. Foraging activity peaks during low tide. Despite touch being their primary hunting tool, the bill is relatively poorly infused with nerves, certainly not comparable to the highly innervated bills of some ducks and wading bird species. Black skimmers fall prey to many different types of animals. Mammals and predatory birds often eat adults and juveniles alike. Eggs are preyed on by rats, gulls, dogs, raccoons, cats, and even ants. They form colonies to passively avoid predation. When threatened, individuals in a colony will fly and bark warning calls that are spread by neighboring individuals until the alarm is broadcast throughout the colony.

Highly social, black skimmers spend much of their time loafing gregariously on sandbars. They bathe regularly in freshwater and preen often. When sleeping, they tuck their heads into the feathers on their back. They roost and breed in colonies that can include thousands of pairs, young and old – though in colonies that grow to that size, the birds tend to nest in clusters of 50 or so pairs. There is no social hierarchy but they tend to be highly territorial of nest sites. They communicate with each other through both vocalization and displays. The only vocalization is a yapping bark, which can be heard in many contexts, from predator sightings and foraging to fighting. Males give calls slightly lower in pitch than females. Warning barks to intruding neighbors are often accompanied by head tosses and an aggressive upright posture. Bill-clicking can also sometimes be heard during conflicts. To avoid aggression when moving through a colony, skimmers walk with the bill held upright. Their barking earned them the name seadogs in some areas of the US. Black skimmers in flight are like an aerial ballet. They circle, bank, and alight as one. Activity peaks at dawn and dusk. Their flight while foraging is very graceful. The short stroke of their wings and the manner in which they seem to bound up and down gives the impression of slow movement, and yet they can attain speeds in excess of 25 miles per hour.

Breeding occurs during the summer, generally starting in late April or May. Skimmers nest on the sand along sparsely vegetated beaches, sandbars, and dredge spoil islands. Nesting occurs in colonies of one to several hundred pairs. Successful colonies often occupy the same nest sites each year, returning where they have experienced past reproductive success, provided that suitable habitat remains. Small colonies or those that are unsuccessful usually relocate. They often join colonies of common and least terns, which nest earlier than the skimmers. Black skimmers begin a courtship process once they arrive at a breeding colony, forming pairs and establishing territories within about one week. They are monogamous and males aggressively protect their mates. Both the male and female dig shallow scrapes in the sand, one of which will be selected as the nest site. This also allows the neighbors to know where the nest will be constructed. The distance between nests is usually about 3 feet, but when space is available, nests can be up to 13 feet apart. During courtship, a male presents a fish to the female. Once the female accepts the fish and holds it in her beak, copulation occurs. The female holds the fish in her beak during copulation and swallows it afterward. If a male can’t find a fish, he may still be successful in courting her by presenting a stick or a leaf. This ritual may occur several times a day. From mid-May to early June, the female lays a clutch of two to six eggs. She may replace a lost clutch, particularly those destroyed by flooding. Egg laying occurs over a span of about 8 days. Sandy-colored with brown speckling, the eggs are well camouflaged within their scrape nest. Both adults incubate the eggs, which hatch in a little less than a month. Within a few days, they start to wander within the nest vicinity. If danger threatens, they attempt to look inconspicuous by lying flat on the sand, or making a little hollow to lie in. Adults take to the air and aggressively mob any intruders, or may feign injury to lure predators away. By two weeks old, the chicks are able to elude predators. Both parents feed the chicks. Initially, both the upper and lower bill are equal in length, and the chicks can pick up food from the ground, but by fledging, the lower mandible is already nearly a half-inch longer than the upper. Fledging takes about 4 weeks, with males taking a little longer than females. After fledging in mid-July to early August, they remain in flocks prior to fall migration. On average, females reach sexual maturity around 3 years of age, and males around 4 years. The average lifespan in the wild is 5 to 15 years. The oldest recorded black skimmer was at least 23 years when it was identified in 2013 by its band in California. It had been banded in the same state in 1990.

In late 19th century, eggs were harvested commercially, and adults were killed for their feathers, leading to a population reduction. They’ve made a good recovery since those days, but are still very sensitive to disturbance during nesting, such as people walking or driving through nesting areas. People love the beach, too, and are often unaware that their activities can cause problems for the birds. Plus, people are relocating to the coasts at unprecedented levels, causing exponentially increased development and traffic on the beaches. Habitat loss due to coastal development is the main threat to the species. Because so many coastal habitats have been developed or otherwise modified, skimmers have become limited in their distribution over most of their range. In addition, pesticides can lead to shell thinning in eggs, and other pollutants can lead to a complete lack of shell formation. While not listed as vulnerable at a federal level, the species appears on the lists of several states. On a good note, the symbolic fencing, beach maintenance, and other management actions designed for the piping plover often benefit black skimmer nesting habitat as well, along with many other coastal nesting species.

Where I learned about black skimmers, and you can too!

The Cornell Lab: All About Birds
www.allaboutbirds.org/guide/Black_Skimmer/overview


TPWD: Take a look at efforts underway to save one of the most threatened coastal birds in Texas.