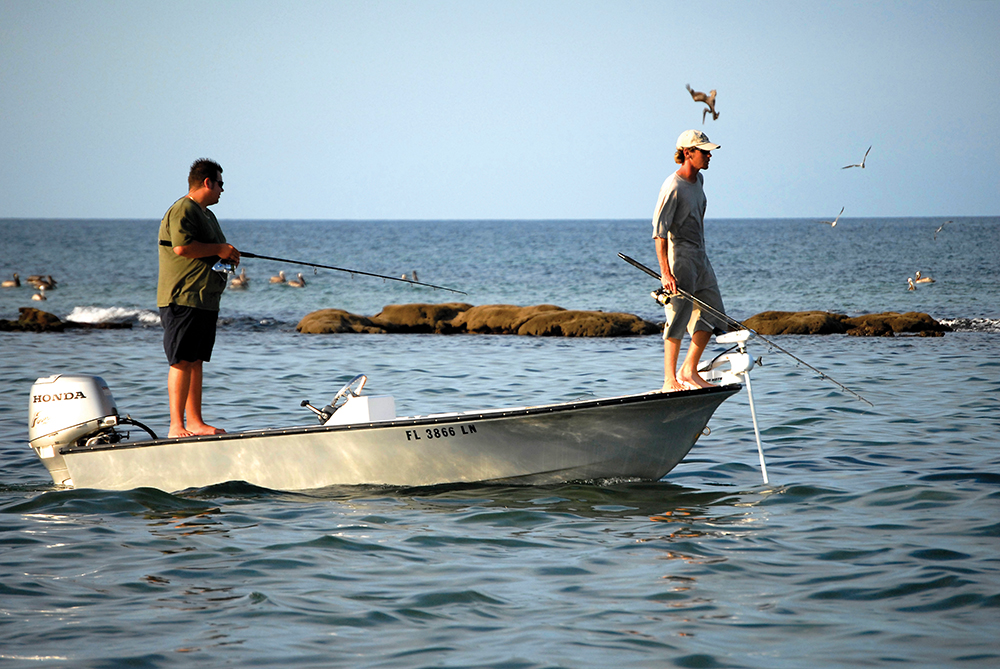 You can bet these guys aren’t using much fuel at the jetties in a small boat, exploring with electric motor.

With gas prices the worst ever, we’ve all faced bigger fuel bills this summer. Especially boaters.

I’m not sure what impact gas prices have had on actual boating numbers this summer, because it was too early to tell at this writing. However a mechanic friend of mine from a major boat dealership said that when gas hit $4 a gallon a few years ago, they lost 40 percent of their business. After the boat-buying boom year of 2020, a lot of new boat owners must now be asking themselves what the heck they’ve gotten themselves into, keeping those boats in the driveway instead.

This summer has been a good time to research any tricks for lowering a boat’s gas bill. Some of the more obvious would be (1) using a smaller boat, (2) launching closer to the fish, and (3) buying cheaper gas on the highway instead of a marina. Another tip is to (4) upgrade from 2-stroke to 4-stroke outboard engines. And (5) when targeting snapper, explore those state water artificial reefs out nine miles, instead of running 30 to 50 miles offshore. (6) Avoid trolling all day. (7) Try spending a night or two offshore and getting in some serious fishing time on the same tank of gas. And (8) maybe skip those one-day tuna trips way further offshore.

Hard times for boaters. Back in the day when fishing offshore, we really had it “made in the shade.” Gas was cheap and boats were smaller. We began to sign up in big tournaments in 1983 using a small boat (by today’s standards) that had an 80-gallon fuel tank. We also carried a 15-gallon fuel drum easily siphoned. With a single Merc 2-stroke outboard we’d stay offshore three days and two nights. We were 30 years old and could take the abuse and exposure out there. We had no reason to fish that long and far, except for the tournament’s cash prize, which was hefty. Winning first place was worth $60K in today’s dollars. We’d win a nice stack of Benjamins instead of some underpowered boat on a locally-made trailer, a more visible and flashy prize that later became popular.

Preparation back then was slim, we didn’t even carry extra spark plugs. And looking back, we were fairly lucky to survive those years, but by then we had more than a dozen years of offshore experience in small boats. There were any number of preparations we could have made to increase fuel efficiency. We didn’t troll at all with the single engine boat. (Later, with twin Yamahas, we’d slow-troll some at each oil rig with one engine.) We’d tie up to an oil rig for hours and hours, including overnight. We never left a (preferably manned and well-lit) rig after dark, but camped right there. There was lots of fishing time, more than we wanted. Time to swim or take a nap. Catch a few snapper after dark, when the triggerfish were asleep. Gas was around ninety cents a gallon. Toss the store teller four or five $20’s and off we went on a three-day offshore adventure.

It’s hard for the younger guys to imagine those halcyon times, when today many go-fast offshore boats carry 300 or even 400-gallon gas tanks that requires $1,500-$2,000 to fill up, not counting fuel additives. As for today’s kingfish tournaments, in recent years they’ve required their boats to return by 5 p.m. each day, even if they’ve run 100 miles down the coast to fish, and never mind the whitecaps. With today’s fuel prices, that sort of wastefulness won’t last much longer.

Now is a really good time to have a fuel efficient, 4-stroke engine on a smaller boat. I’ve read that boats with today’s triple 300 outboards, running at only 26 mph, get .98 miles per gallon. In a tournament these boats run more than double that speed. Running with wide open throttle (WOT) in a tourney scenario, they get .65 miles per gallon in calm seas. And that’s with modern 4-stroke engines…

Tournaments and big boats aside, another problem on the Texas coast is the wind. And the further south, the more wind. In rough water even on the open bays, a small boat isn’t practical. We got away with it for years on the upper coast in the Port Arthur area because it was a little less windy, though it still might blow for months, like it did this year. (Let’s hope a changing climate doesn’t make it hotter and windier in the future.) Within sight of Louisiana, we had ample salt marsh or the jetties to fish on windy days. Some of my high school buddies, who made it to their 50th high school reunion last year, still bring home trout, flounder and redfish with their johnboats. Something of a rarity, these days.

What I generally call trout guides today need at least 24 feet of fiberglass to haul an average of four anglers across Texas’ typical and frequent wave chops and whitecaps. That takes horsepower and lots of gas. Unless they’re running hard for the honeyhole before sunrise, they can at least throttle back and run at a more fuel-efficient rate, which many do. With even more of them learning that trick thanks to this summer’s cruel gas prices. More guides have started adding a fuel surcharge, as well. Want to run to the next bay or go try the jetties? It’s going to cost you.

After fishing the Gulf since 1968, and having owned nine fiberglass boats up to 25 feet, I would today never consider anything bigger than a welded aluminum boat, easily towed on the highway, with exceptional mileage on the water from a 4-stroke outboard. My own aluminum boat gets nine miles per gallon; I still enjoy the jetties and near-shore platforms and in the right weather they’re easily reached, especially after launching in calm surf within sight of my goal. If a rare head-on wind suddenly picks up, I take the longer way back without bashing waves. The trick with these smaller boats is to watch the weather and launch near the fish. For example, don’t launch in Clear Lake to fish the Galveston jetties, which can be long and tedious and a gas burner. Even unsafe, in fog or stormy weather.

>Have your outboard engine tuned up. Spark plugs are cheap and can be changed in the driveway, just be sure the numbers match on those new plugs, and don’t settle for a substitute brand and number. I fished with a tournament guy in the late 1990s who would remove and toss his three engine’s 24 spark plugs every week on the tournament circuit. Although his situation was more about the need for speed, than fuel efficiency. He had a sponsored allowance of $3K per week. Today, that would require much more.

>Pick the right propeller(s) for your boat. They say the right prop can make a difference of 10 percent on saving fuel. Especially if there are no dings and dents. Years ago the guy who owned Meek’s Marine (John Meeks?) drove his Boston Whaler from Galveston to the Yucatan in Mexico. When his boat’s fuel weight dropped, he stopped in the middle of the Gulf and changed props. That’s attention to detail. On that 500 mile run, he really wanted the best fuel efficiency. I assume he didn’t use aluminum props. They flex and reduce pitch when running, getting less fuel economy than steel props.

>On bigger boats, install a fuel flow meter, to find your top fuel efficiency when running.

>If you have four friends big enough to play defensive lineman for the Cowboys, maybe don’t take them all fishing on the same day.