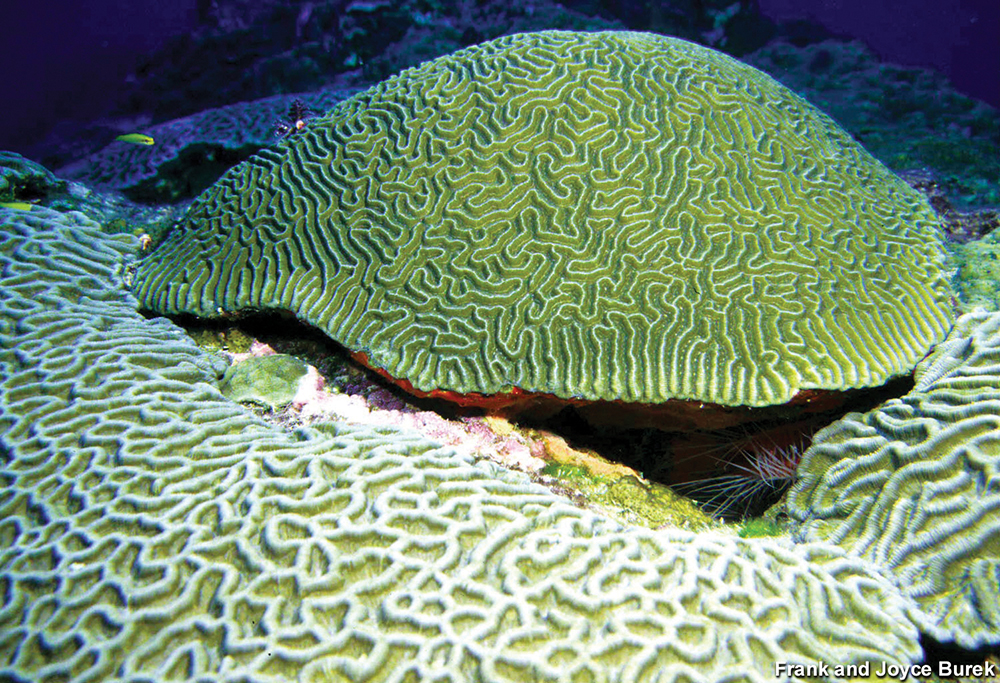 This picture illustrates the two different species of brain coral found at the Flower Gardens. In the foreground is boulder brain coral, Colpophyllia natans. In the background is the symmetrical brain coral, Diploria strigosa. Photo by Frank and Joyce Burek / NOAA.

Most structures that we call "coral" are, in fact, made up of hundreds to thousands of tiny animals called polyps. Coral polyps are tiny, soft-bodied organisms that secrete a hard, protective limestone skeleton, called a calicle, at their base. Reefs begin when a polyp attaches itself to a rock on the sea floor, then divides into thousands of clones. The clone calicles connect to one another, creating a colony, and as colonies grow, they join with other colonies and become reefs. All corals are in the phylum Cnidaria, along with jellyfish and anemones. All but the fire corals (named for their strong sting) are in a class called Anthozoa, or "flower animals.” Stony corals, the most important reef builders, are members of the order Scleractinia (“hard-rayed”). Brain coral is the common name for a number of stony coral species in the Mussidae and Merulinidae families.

Brain corals are generally round or oblong, with a wrinkled surface that looks like the contours of a human brain. They can reach more than six feet in diameter, but only the outer few millimeters are alive; the rest is skeleton. As polyps on the surface die, new generations make their homes on top of the remains. The coral structures only grow a few millimeters each year and may be hundreds of years old. Each structure is formed by hundreds of genetically identical polyps. Each polyp has two layers – an outer ectoderm and an inner endoderm, which are separated by a jelly-like mesogloea. They also have a single opening which acts as both mouth and anus, and is ringed by tentacles containing nematocysts (stinging cells). Inside the body of the polyp are digestive and reproductive tissues. The soft polyp tissue houses zooxanthellae (symbiotic dinoflagellate algae), which give these corals their coloration, ranging from varying degrees of yellow and brown to brighter colors; some even glow under UV light. Coral polyps are actually translucent, so reefs get many hues from the billions of colorful zooxanthellae algae they host. The alga benefits from being in a protective environment in an elevated position. The coral benefits from the nutrients produced photosynthetically by the algae, which provide part of its needs for growth and calcification. Unlike the polyps that make up some other corals, those that make up brain corals are all connected. This integration is advantageous because the polyps can transfer nutrients, hormones, and oxygen, making it easier for the colony to communicate. But it also makes it more vulnerable, because if even one polyp gets sick, the pathogen can quickly spread to the rest of the colony.

Brain corals live in shallow, warm-water reefs around the world, including the Flower Garden Banks National Marine Sanctuary in the Gulf of Mexico, which lies roughly 100 miles south of the Texas-Louisiana border. They need to be in shallow, clear, and warm waters for their symbiotic zooxanthellae to photosynthesize. Depth is limited to about 165 feet, depending heavily on water quality. Brain corals are suspension feeders that survive mainly on zooplankton and bacteria, and also get some essential nutrients from their zooxanthellae. At night, the corals rope in small drifting organisms with their tentacles and mesenterial filaments (string-like extensions attached to membranes that partition the stomach cavity). Nematocysts in the tentacles render the prey immobile. Mucus and cilia aid in transporting the food to the mouth. In the daytime, the brain coral uses its tentacles to cover the grooves on its outer surface, or withdraws them completely to minimize the effects of heavy predator grazing. Despite being armed with nematocysts, corals are not immune to predation. Gastropods, polychaetes, sea urchins, starfishes, sea spiders, and parrotfish, among others, will all take a bite out these brains. Corals also have to contend with competitors. They use their nematocysts to keep encroaching corals at bay. Seaweeds are a particularly dangerous competitor, as they typically grow much faster and sometimes have compounds on their surface that are toxic to the coral.

Corals have many reproductive strategies – they can be male or female or both, and can reproduce asexually or sexually. Asexual reproduction increases the size of the colony, and sexual reproduction increases genetic diversity and starts new colonies that can be far from the parents. Most stony corals are broadcast spawners. Colonies release millions of sperm and eggs into the water column at the same time (usually related to environmental cues, such as lunar cycle, temperature, or day length). The gametes join together to form larvae called planulae that float along with the ocean’s currents for a few days until they settle. During its planktonic larval stage, the coral has locomotion. After that time, it becomes permanently sessile. Once the primary polyp settles, asexual reproduction commences, producing new colonies. Spawning often occurs just once a year and usually occurs at night. Some corals brood their eggs in the body of the polyp and only release sperm into the water. As the sperm sinks, polyps containing eggs take them in and fertilization occurs inside the body. After the eggs hatch, larvae are released into the water column. Brooders often reproduce several times a year on a lunar cycle. Brain corals are hermaphroditic – each individual produces both eggs and sperm – and can be broadcast spawners or brooders.

A big coral colony or reef takes a long time to grow, because each coral grows slowly. The fastest corals expand at more than six inches per year, but most grow less than an inch per year. Brain coral can grow outward at a rate of approximately 3.5 millimeters per year, reaching over six feet in diameter and living up to 900 years. We know this because corals lay down annual rings, just like trees. These skeletons can tell us about what conditions were like hundreds or thousands of years ago. The coral reef communities of Flower Garden Banks probably began developing 10,000 to 15,000 years ago.

NOAA’s Flower Garden Banks National Marine Sanctuary protects these reefs, which are famous for boulder-sized brain and star corals. Discovered at the turn of the 20th century by anglers in search of snapper and grouper, the banks’ colorful reefs are the northernmost in the continental United States. Due to its more northerly location and lower average temperature, nearby Stetson Bank is home to smaller coral colonies and dense arrays of large and vivid sponges. The next closest tropical reefs lie 400 miles away, off the coast of Tampico, just north of Veracruz, Mexico.

Corals are the cornerstone of the world’s reefs, which cover less than one percent of the ocean floor, but support about 25 percent of all marine creatures. Brain corals are some of the most common coral in the ocean, making them a species of least concern on the IUCN Red List. However, just because they are plentiful, doesn’t mean they are immune from threats like physical damage, bleaching, ocean acidification, warming oceans, or pollution and debris. The greatest threats to reefs are rising water temperatures and ocean acidification linked to rising carbon dioxide levels. High water temperatures can cause coral polyps to expel their symbiotic zooxanthellae algae, a condition known as coral bleaching. Without their zooxanthellae, you can see right through the translucent polyps to the stony white skeleton. Temperatures more than 2 degrees F above the normal seasonal maximum can cause bleaching, and while bleached corals do not die immediately, if high temperatures persist for a long time, corals either die from starvation or disease.

Meanwhile, ocean acidification makes it more difficult for corals to build their calcium carbonate skeletons, and can even break apart the existing skeletons that already provide structure for reefs. Scientists predict that by 2085, ocean conditions will be acidic enough to begin dissolving corals around the globe, and without significant action on climate change, our oceans could lose many of their colorful reefs by the end of the century. Half of the Great Barrier Reef, the world's largest coral reef system, has died of coral bleaching since 2016. It’s important that we make individual choices and support policies that protect coral reefs, because in addition to being beautiful attractions for ecotourists and anglers, they provide habitat for many of the world’s recreationally and commercially important fish species, protection from hurricane storm surges and erosion (in areas where they form the basis of barrier islands), produce medically significant compounds, and are some of the world’s oldest, most biodiversity-rich ecosystems, rivaling even the rainforests.

Where I learned about brain corals, and you can too!

Science and the Sea
www.scienceandthesea.org/program/201804/brain-corals

The University of Warwick
coralpedia.bio.warwick.ac.uk/en/corals/diploria_labyrinthiformis

The University of the West Indies
sta.uwi.edu/fst/lifesciences/sites/default/files/lifesciences/documents/ogatt/Diploria_labyrinthiformis%20-%20Grooved%20Brain%20Coral.pdf

Corals of the World
www.coralsoftheworld.org/synonymy_lookup/