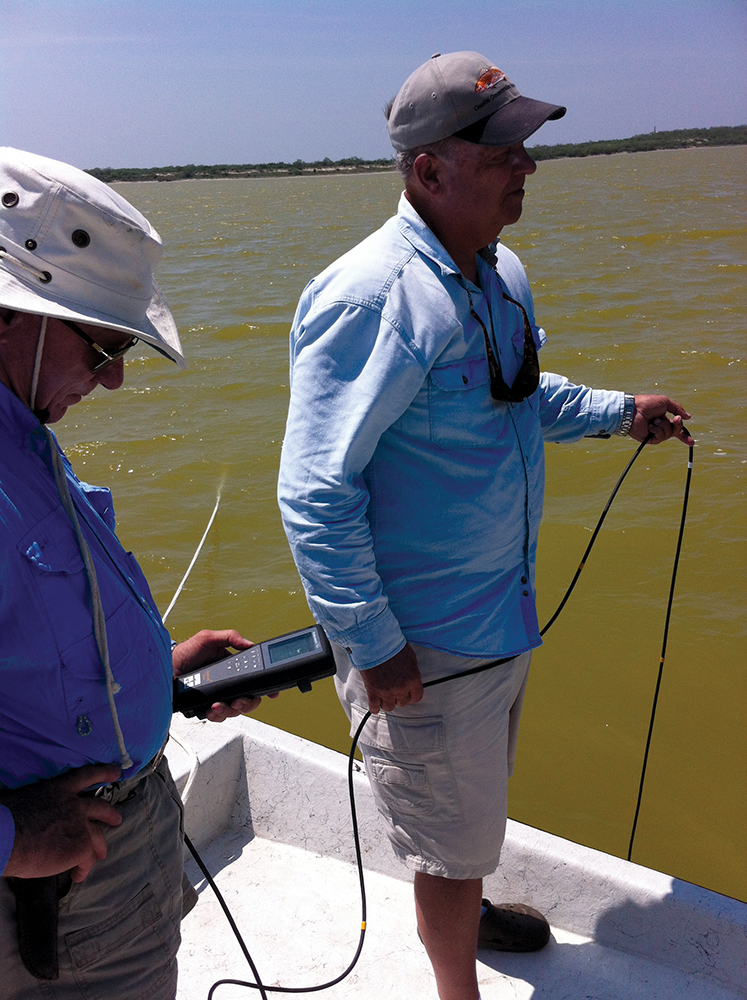 Baffin Bay is a very special, iconic Texas bay. It covers approximately 60,000 acres and is part of one of the world’s largest hypersaline estuaries, the Laguna Madre. It is laced with ancient serpulid reefs, the likes of which are not found in any other estuary in the world, with about ten square miles of them scattered around the bay. With large stretches of undeveloped, pristine shorelines, state record fisheries, waterfowl hunting, and premier birding, there’s nothing like it on the Texas coast or anywhere in the United States, for that matter. It’s still a wild remote place and that’s what really draws people to it.

A Bay in Transition

Traditionally Baffin Bay has also supported an incredible fishery and is one of the most productive bays on the Texas coast for commercial and sport fishing, drawing folks from the local area and from abroad, providing an important source of income for the local community. It produces more black drum than any place in the United States.

Baffin was home to two state record trout, so it’s very well known for trophy trout fishing. Since the 1980s however, there has been a huge increase in both commercial and sportfishing pressure. Back in the fifties and sixties, you could probably count the number of fishing guides on two hands. Now, along the Gulf Coast there are around twelve hundred fishing guides and more every year. The number of saltwater fishing licenses sold is going up and we’re recruiting more and more saltwater fisherman to the Laguna Madre and Baffin Bay every year.

The increasing fishing pressure has occurred against a backdrop of harmful changes in water quality that are occurring in the bay, which negatively affect habitat and prey resources for fish. For example, although black drum have been a mainstay in Baffin Bay in terms of commercial and sport fishing, in recent years there have been times that regional restaurant owners were not able to find healthy fish. Instead, they were encountering what they called “jelly drum.” These were emaciated fish that were literally absorbing their own bodies because they were starving to death. There are indications that poor water quality may negatively affect the primary food source for Black drum, dwarf surf clams. Dwarf surf clams live on the bottom and are very sensitive to water quality changes. There has also been a reduction in the quantity of white shrimp and brown shrimp, though it’s not clear why. Baffin Bay used to be a productive shrimping bay, but the seasonal shrimp migrations are not as common as they once were.

Over the last 40 years, there has also been a decline in habitat that is otherwise critical for Baffin Bay’s fisheries, including seagrass beds and serpulid reefs. This loss of habitat has been driven primarily by a decline in water quality. For example, agricultural practices that strip the land of brush and grasses can contribute to erosion. Many of the serpulid reefs, particularly in areas of Alazan Bay, have now been covered or partially covered with sediment. Another contributing factor is nutrient pollution (an overabundance of nitrogen and phosphorus) from sewage treatment facilities, septic systems, and runoff from surrounding lands that has overfed the streams (Los Olmos, San Fernando and Petronila) that connect with the bay downstream. These nutrients don’t just stay in the streams, but eventually end up in Baffin Bay, leading to symptoms that degrade the entire ecosystem. Recurring, long-lived blooms of brown tide algae that feed off these nutrients have created many issues downstream in the bay. For example, the brown tide blooms cause reduced light penetration, leading to loss of seagrass beds that serve as a refuge for juvenile fish and as a feeding ground for larger adults. Episodic low oxygen conditions are also a symptom of nutrient enrichment, and low oxygen events have caused several major kills of spotted sea trout, red drum, black drum and forage fish over the last 20 years.

Around 2010-2012, when I was out in restaurants and stores in the community around Baffin Bay, I heard people talking about the negative changes in the bay. They wondered what was causing them and what could be done. These were people who had lived their whole lives around Baffin and knew the bay better than anyone. I had seen the changes myself and was also concerned. Several of us decided that it was time to do something about it, so we called a meeting at my bay house in 2012.

We invited commercial fishermen, fishing guides, sport fishermen, and a number of local business owners and residents. I also invited Dr. Mike Wetz of Texas A&M University-Corpus Christi and Jace Tunnell with Coastal Bend Bays and Estuaries Program. They came and listened as we vented our concerns for several hours. We all knew there was something wrong with the water because of the blooms we were having and the episodic fish kills that were occurring more and more frequently. That meeting was the beginning of the Baffin Bay Volunteer Study.

In order to gather the data needed to study the problem, we would need a group of people taking water samples over several years. We decided quickly that because of the university’s lack of dedicated resources, we needed to do this on a volunteer basis. My job was to source and collect a group of volunteers who would do the water sampling at least once a month.

We had eleven stations and two teams, an east team and a west team. Because it’s such a long bay, you couldn’t beat the wind unless you had boats on both ends of the bay. We were able to keep twelve to seventeen volunteers sampling for over four years. They volunteered time and resources, utilizing their own boats and vehicles to get it done. These were people who really had a passion about the health of Baffin Bay. They committed and stuck with it. It was very fulfilling to work with likeminded people who cared enough and were willing to get their hands dirty to protect this Texas treasure.

A Path to Restoring Baffin Bay

The water quality data that we collected has been invaluable. With the sampling and the study, we were able to get a picture of what was causing the problems. Organic nitrogen and chlorophyll (an indicator of algal biomass and of overall nutrient enrichment) were higher in Baffin Bay than readings in just about any other Texas estuary, and these water quality indicators had been increasing over time along with changes occurring in the surrounding watershed. This was a foundational step in finding the causes of the habitat and fishery changes in the bay, and it guided more recent studies that have identified some of the main causes of the brown tide algal blooms, low oxygen events, and sources of the nutrients going into the bay.

In next month’s issue, Mike Wetz and I will talk about an exciting and important initiative, “Bringing Baffin Back.” The initiative will address the water quality issues that are negatively affecting the bay and provide a path forward for restoring Baffin Bay’s lost habitat so that it can support an incredible fishery well into the future, even with other pressures that are affecting the bay. For a sneak peek, visit: https://www.youtube.com/watch?v=ZPP0V1EnyT4