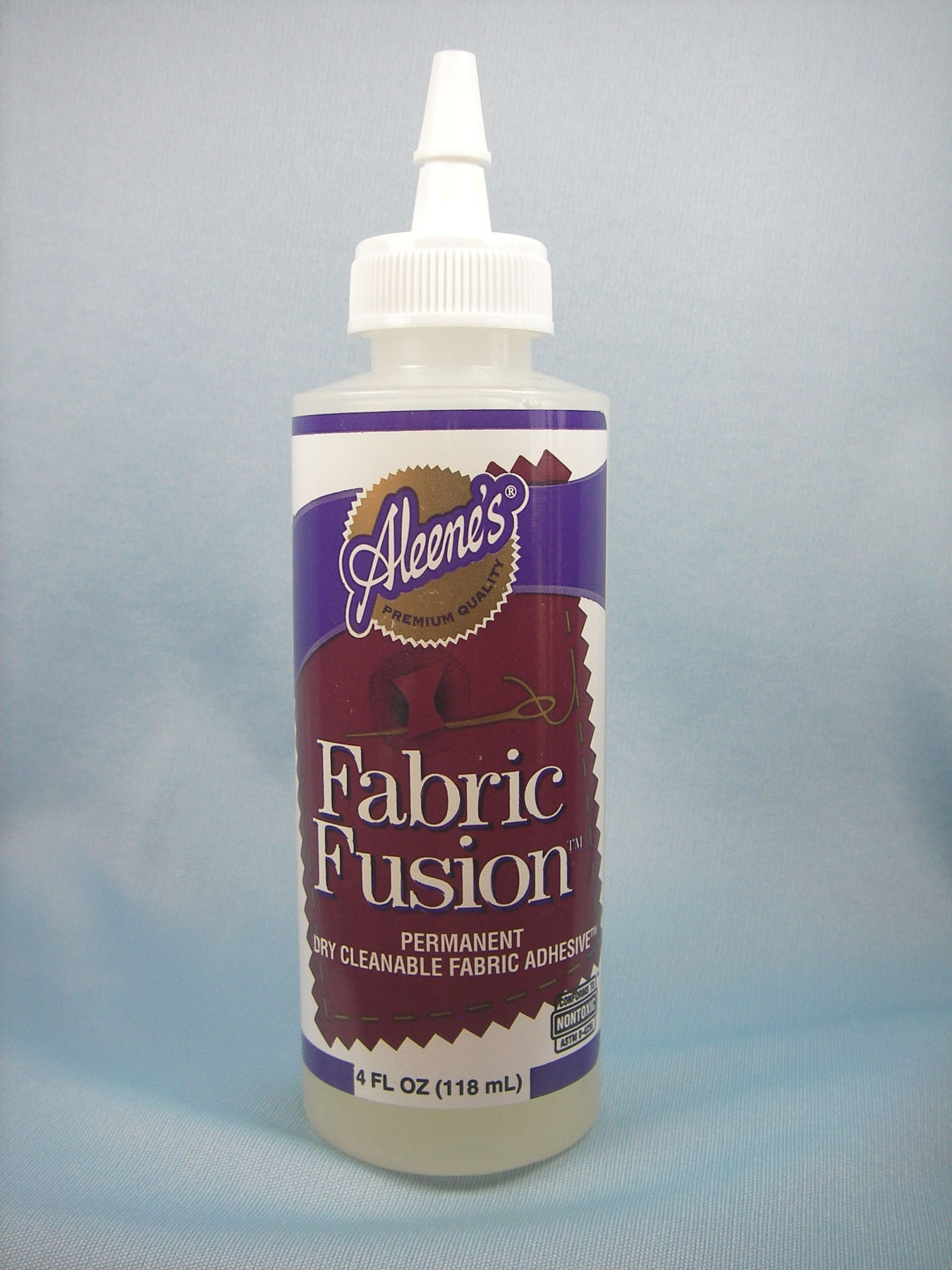 Every now and then I come across an unusual material at a craft or department store that looks like it might work for tying flies. Most of these non-traditional materials end up disappointing me because they really weren't intended to be dunked in saltwater and chewed on by fish, but sometimes one turns out to be genuinely useful and definitely worth writing about. A few months ago, I stumbled onto an unusual bottle of glue in the sewing dept. at Wal-Mart. The glue was called Aleene's Fabric Fusion, and the label on the bottle said, "Non-toxic, permanent, dry cleanable, fabric adhesive." Upon closer inspection of the bottle, I noticed the glue was clear and syrupy (like epoxy). I was intrigued because most water-based glues are milky and runny, and I had never found any that could hold up to the kind of soaking and abuse inflicted on saltwater flies. In spite of better judgment, I tossed a bottle of Aleene's into the cart. A few days later, I started experimenting with it.

The first thing I noticed when I squirted some Aleene's onto a toothpick was that it looked EXACTLY like epoxy. It was viscous, crystal clear, and it rolled and sagged easily around the pick. But unlike epoxy, the Aleene's had no noxious fumes and did not require any mixing. I put some drops of Aleene's on a white sheet of paper to test how long they took to dry and how tough they were once they hardened. To my surprise, the drops dried in several hours. They shrunk slightly as the water in the glue evaporated, but the solids left behind were crystal clear and extremely tough. They weren't glassy-hard and brittle, but more like clear plastic or vinyl. I was impressed and ready to try Aleene's out on some flies.

The first flies on which I used Aleene's were Surf Candy patterns. The body portions of these flies are traditionally made by soaking synthetic-fiber flies with epoxy and rotating them on an electric turner as the epoxy cures. The epoxy penetrates the fibers and creates a juicy translucent appearance. Surf Candies are relatively easy flies to make, but the epoxy stinks, it's messy, and I pity the poor guy who accidentally gets it in his eyes. Unfortunately, besides expensive UV-activated acrylic resins, epoxy has thus far been the only adhesive that really works for these flies.

I tied up a few raw Surf Candy patterns, coated them each with a liberal glob of Aleene's, and stuck them on a turner. An hour later, I removed them and was quite pleased with the result. The Aleene's had penetrated the fibers of the fly and smoothed out to a shiny, clear finish. The fly bodies were translucent and fishy-looking. I stuck eyes on each of the flies, added a second coat of Aleene's, and put them back on the turner. The next morning, I removed the flies and was thrilled with how they looked. The Aleene's on each fly had shrunk slightly from its original volume, but the flies were smooth and translucent exactly like traditional Surf Candy flies.

Next, I tried Aleene's as a substitute for epoxy on beaded eyes for shrimp patterns. Traditionally, these eyes are made by stringing pairs of tiny glass beads (usually black/red or black/orange) onto a strand of monofilament. A drop of epoxy is placed on each pair of beads, fusing them to the mono and optically blending the beads together. The result is a wonderfully lifelike crustacean eye that can be used on shrimp and crab patterns. I strung up a few sets of eyes and placed a large drop of Aleene's on each where I would normally place epoxy. Several hours later, each had dried to a beautiful finish. I couldn't help but wonder what was in this stuff.

To answer that question, I got online and pulled up a copy of a Material Safety Data Sheet for Aleene's Fabric Fusion. It turns out the adhesive is a water-based polyurethane. It has a specific gravity of 1.08 (slightly heavier than water), and it conforms to the ASTM D-4236 standard as a nontoxic material.

The dried glue is super tough and will not crack or discolor. I had several Surf Candy flies that turned milky after accidentally staying closed up in a wet box for several weeks, but that was an extreme condition and a mistake on my part. So far, I have used Aleene's Fabric Fusion in all sorts of applications. It works great as a protective coating, an underlayment, a penetrating resin, or a general adhesive. It can be thinned if needed with a few drops of water. Best of all, there are no fumes and cleanup is a snap. Dried Aleene's is just slightly flexible, which is good because it won't crack. However, this makes it unsuitable for the standard rigid spoonfly made from epoxy-coated Mylar tape. For this reason, I don't consider Aleene's to be a complete replacement for epoxy, but it's close.

If you have a youngster learning to tie flies, Aleene's would be a great glue for him/her to use. It has the same consistency as epoxy, without the nasty side. Likewise, if you spend much time working with epoxy or other adhesives, I highly recommend you pick up a bottle of Aleene's and experiment with it. You can find it at Wal-Mart and most craft stores. A 4-oz bottle costs around five dollars. It's great stuff. As always, if you have any questions, feel free to contact me or visit my website at www.caseysmartt.com.