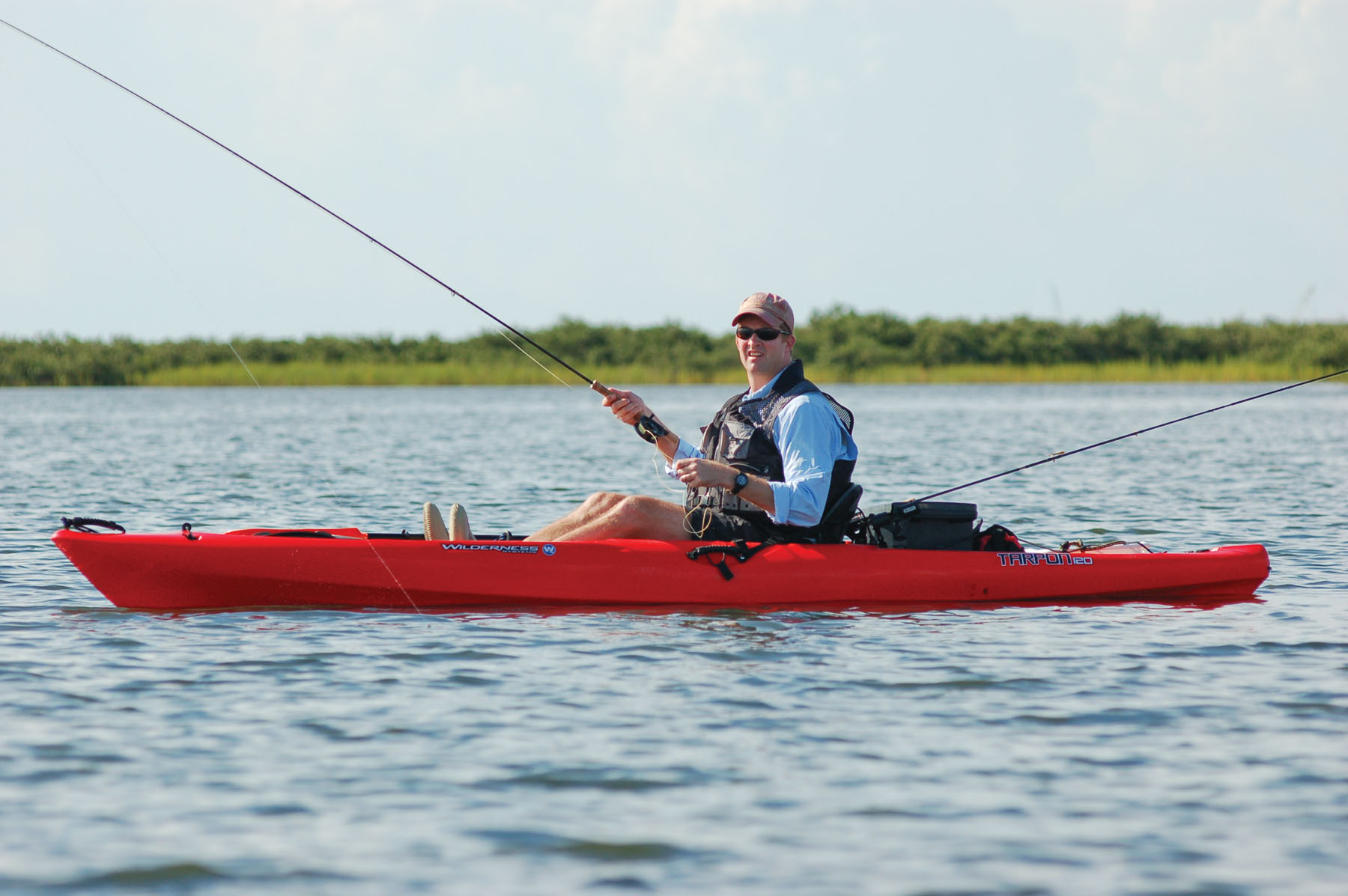 Fly fishing has many rewards. The challenge of casting a fly to a fish, hooking it, and landing it on fly tackle is one of angling's great pleasures. But getting there can sometimes be a rocky road. If you have ever tried to drop a fly in front of a moving redfish from the seat of a kayak, struggled to manage your fly line in the wind-blown surf, or lost your composure on the front of a poling skiff, you know how difficult casting can be. This month we'll take a look at a few common casting challenges and some ways to manage them.

Standing on the bow of a skiff while a guide (or a buddy) poles the boat and spots fish is a terrific way to work shallow water. It's clean, quiet, and effective. When fishing with a dedicated shallow water guide, poling a skiff through the shallows will likely be the arrangement. Making this style of fishing a success often depends on how well the caster on the front deck responds to directions from the guide on the elevated rear deck. When a guide spots a fish, he'll bark out its location and direction, often something like, "Redfish… two o'clock, 40 ft., headed to the left." The angler on the bow must digest these instructions and respond quickly with an accurate cast, sometimes without actually seeing the target. It can be tricky.

There are two keys to making this work smoothly - preparation and quick thinking. First, the angler on the bow should have his tackle ready and organized, and be prepared to fire a cast at all times. This means that he should frequently check to be sure loose line is cleanly coiled on the deck, free of tangles, and ready to go at a moment's notice. This is why many anglers pitch off their shoes in warm weather. Bare feet can feel the fly line on the deck and help avoid unknowingly stepping on it. Also important is for the caster to strip off an adequate length of fly line. Too little line means the cast could come up short and too much line increases the chance of tangles and snags within the boat that foil casts.

A second important factor is for the caster to continually visualize the different angles and distances the guide might call out. Under quick notice it can be difficult to respond to a guide's directions. Everyone is excited, the wind is blowing, and the fish and boat are both moving. One way to remedy this is to get the guide to call out some imaginary locations and practice casts while the fishing is slow. This exercise will help build a better feel for distance, angles, and the style of the guide. It also gives the guide a better feel for the ability of the angler up front. If all else fails, the angler on the bow can simply point the fly rod in the direction of a called target and move it right or left until the aim is in the correct direction.

Kayaks are wonderful craft for slipping quietly up on fish. But making a cast from one can be challenging. When seated in either a forward or side-saddle position, a fly caster has two things going against him. First, the waterline is essentially at waist level. This limits the room for error on the back cast because the fly line has less available distance to fall before it strikes the surface of the water. Second, making a cast from a seated position substantially limits body motion - like trying to throw a fastball while sitting on the ground.

There are several solutions to these problems. To improve the backcast, it is important to aim it high… way higher than what you would normally expect. A high backcast will provide a bit more room for the line to fall and decrease the risk of it striking the surface of the water before the forward cast is made. Along with a high backcast, it also helps to keep the stroke short, strong, and efficient. Don't get too ambitious with distance. It is better to make short clean casts than to struggle with long awkward ones.

The problem of cramped quarters is a bit more robust. When I am forced to cast a fly rod from the confines of a kayak, I have always preferred to flip side-saddle with my legs hanging over the side, rather than facing forward. A side-saddle position eliminates frontal obstructions, allows more freedom of movement, and also makes it possible to hold the boat in position or make minor adjustments to the boat's position by crab-walking over the sand.

A third solution which addresses the problems of the tight backcasts and the cramped quarters is to simply get out of the kayak and stand up. When it's possible, this is my preference. I generally use the kayak as a tool to get within a reasonable striking distance of fish. Then, I quietly anchor and exit the boat to close the gap on foot. To me, this method is always favorable to sitting in a kayak and struggling to make a cast.

There is nothing quite as good, or as bad, as fly fishing the surf. When the conditions are favorable, the hard sand, clear water, gentle waves and ferocity of the fish in the surf are unmatched. But when it's bad, the wind, crushing waves, piles of sargassum weed, and blowing sand make it flat out miserable. If you can, save yourself misery and plan around the weather. While the bays and backwaters can absorb a punch from Mother Nature, the surf won't. But regardless of weather, the surf will almost always present casting challenges that will test your resolve. The two most common are wind and currents.

In the spring and summer months, a steady SE wind prevails in the Texas surf. It's a bad angle for a right-handed caster because it pushes the fly line into the body of a caster where it can strike the face, neck, and back. If you have ever experienced it, you know the pain of having a windblown lead-eye Clouser pop your head or shoulder blade on a strong forward cast. Feels about like a pellet gun! There are a variety of casting techniques that will keep the fly line off your body in the surf. You can use a backhand cast, a Belgian cast, or switch-hit and cast with your left hand instead of your right hand.

Perhaps the easiest solution, and the one I use, is the backhand cast. To do this, turn your body 90-degrees from the waves and cast toward the beach. Try to make a powerful haul backwards and release your fly on the backcast instead of the forward cast. You have made virtually no change to your casting stroke other than releasing the fly on the backcast rather than the forward cast. Making a good solid backhand cast takes a little practice but it employs a motion your body is already familiar with, so it is easy to learn.

Another solution is to position yourself at a better wind-angle relative to your target. For instance, if you are aiming at the wade gut, simply walk to the first bar, turn, and cast back into the wade gut with the wind at your back. It's easy and it works. You can also make casts parallel to the beach with the wind coming over your left shoulder instead of your right which will keep the line off of you. Be creative and try different options until you find one that works. Adapting to the conditions is the key.

I know of no fly fishermen who have not struggled with their casting skills at one time or another. It's normal. Casting a fly rod is not easy. None of us are born knowing how to do it, and no one gets better without practice. Strive to improve your skills by practicing as much as possible on the water, while fishing. Practicing on a lawn or parking lot is OK, but it is no substitute for what you can learn by spending time on the water.