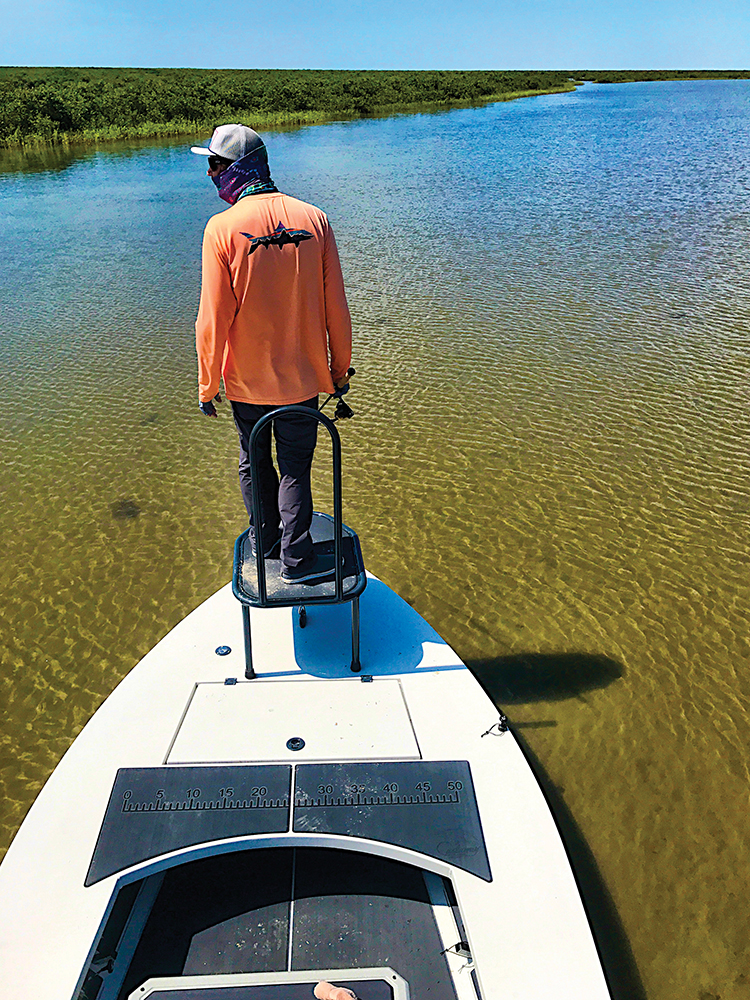 Getting super skinny in the Sabine Skiff.

Fly fishing used to be an oddity on the Texas coast. I vividly recall the first time I actually saw someone waving the long rod at the coast more than 30 years ago. I was wading in Big Pocket easing towards Mule Slough having a good morning with reds and trout on topwaters when a pair of anglers caught my attention. It was a middle-aged couple slowly stalking the opposite shoreline and not casting. This was completely foreign to me at the time. I was of the mindset that the more casts I made the more fish I’d catch.

Being the fishing sponge I was at that age, I stopped and watched to see what they were doing.  Perhaps I could learn something. They slowly stalked the shoreline like a pair of great blue herons zoned in on a mullet. I could see they had rods and they were obviously looking at something, yet they weren’t casting. After moving a few more yards the man pointed towards the shoreline and they both froze.  The woman then began to wave her rod back and forth. It was at this point I finally realized that they were carrying fly rods. She let loose the cast and began stripping line back. The water erupted and she raised the bent rod while both hooted and hollered in their excitement. Very cool.

I had owned a fly rod since I was a teenager, but had only thrown it for bass and perch on my granddaddy’s farm ponds and a couple trips to Colorado on small streams. I had wanted to give it a shot in saltwater, but there wasn’t anyone I knew who was doing it and very little information available. I wish I would have made my way over to that couple and asked a few questions. It probably would have seriously shortened the learning curve I experienced over the coming years.

It’s weird now to try and think back to that time when we didn’t have an entire world of information available on our phones and laptops. It wasn’t easy to learn about an entirely new sport that wasn’t exactly popular around here. There were the occasional magazine articles about catching bonefish and other tropical species in far-off places, but nothing about my local redfish or trout.

A couple years later my father-in-law sent my wife and I on a guided trip with Terry Neal in Port Mansfield. I knew Terry was a fly fisherman and bugged him with questions about it all morning.  After catching a bunch of fish on soft plastics, Terry spotted some tailing reds on a spoil island.  He asked if I wanted to try my luck with his fly rod. Well of course I did. Terry and I slipped out of the boat and eased towards the school. It wasn’t pretty, but I eventually got the fly close enough to get an eat. The red surged towards the ICW stripping line from the reel and then came loose.  Terry patted me on the back and said, “That’s the first step.”

He was so, so correct. There have been many steps along the way. Some have been baby steps and others were huge leaps. The first redfish to come to hand was in a little cove near Greens in West Matty. The big sow trout that ate a Deceiver was in the surf of the Chandeleur Islands as I was casting to a cruising bull red. The first jackfish came at the POC jetties. The first tarpon and bonefish were landed on a trip to Belize. The first redfish on my poling skiff was caught by a friend as I poled. I can still picture Clay Yeaman standing on the bow with the fly rod bent and that fish racing across the flat on the north shore of West Galveston Bay. And then my first paying customer, Buzz Black, connecting with a beautiful redfish in a little backwater off Greens Lake.

I’m still learning things about this sport all the time. I still have “ah-ha” moments when a problem gets solved and I hope that never ends. It’s part of the fun. There are also constant advances in the equipment we use. Rods, reels, lines, boats, etc., are constantly evolving. I’m sure I could still pick up my thirty-year-old fly rod (had it not broken many years ago), the old clicker drag reel and freshwater fly line to go wade a shoreline to catch a redfish. However, the updated gear makes the day so much less frustrating.

Probably the biggest single change I’ve witnessed has been the proliferation of poling skiffs.  When I got my Mitzi Skiff from Jeff Shatto there were only two other poling skiffs in Galveston.  Anywhere I stopped I would always have guys coming up and asking about what kind of boat it was and what it was used for. Three years ago as I was running my last trip in Galveston before moving my operation to POC, I stopped at the big Buc-ee’s near Texas City to gas up. There were seven other poling skiffs at the pumps. Some wish there weren’t so many, but I have to smile about how much the sport I love has grown.

The increased availability of new and improved equipment has also increased the interest in fly fishing the coast. There are fly shops all over the state where a newbie can go to learn the ins and outs of getting started. There are casting instructors available to keep you from picking up a bunch of bad habits from being self-taught. I still have those flaws no matter how hard I try. And there are more guides than ever specializing in fly fishing to help shorten the learning curve on the water.

Whereas that couple I watched all those years ago were akin to spotting a pair of unicorns, now I can’t think of the last time I was on the water and didn’t see other fly fishermen. If you’re interested in getting started or just curious what it would take, go see the folks at your local fly shop. There’s no shame in walking up to the counter and telling them you don’t have a clue but want to learn. We were all there at some point, even that guy running the fly shop.