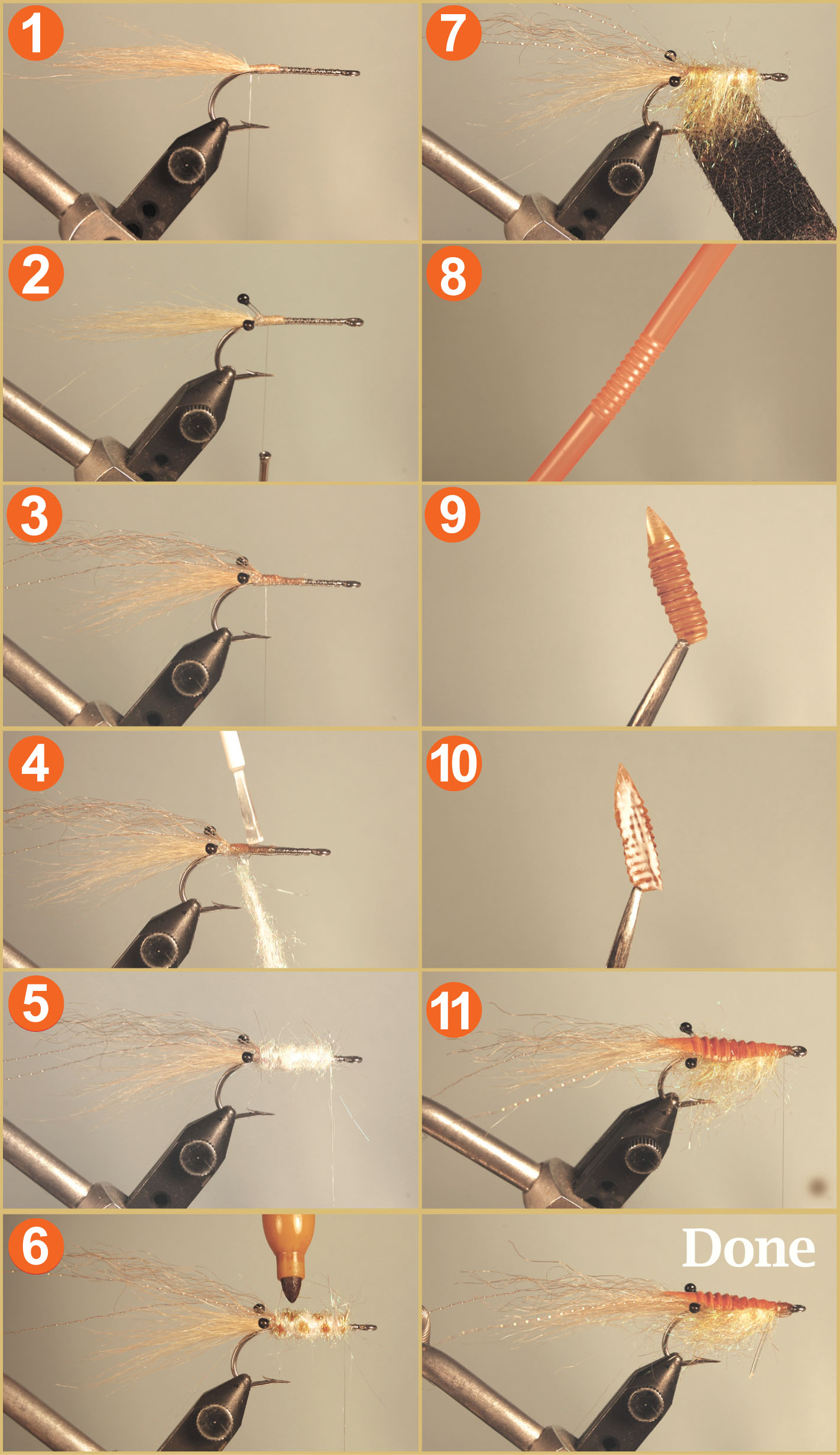 Recently my buddy Jon Fisher and I were tying flies in Rockport, waiting for the ceaseless rain to subside. A pack of flexible neon straws on top of the fridge caught my eye and reminded me of a crustacean pattern I had seen years ago. The fly had a carapace formed from a drinking straw. I grabbed some of the neon straws and we started cutting them up. After a few tries, we produced a shrimp with a straw carapace that looked dang good. And, it was pretty easy to tie too. We thought about what to call the fly until a giganto Whataburger cup on the counter with a straw sticking out of it gave us the answer- "Whata-shrimp."

When I got back home a few days later, I did a little research to find out what the story was on the original pattern from years back. The internet and one of my fly books each turned up crustacean patterns called "Soda Straw Shrimp." They were generally tied by sliding an intact section of clear straw over the hook shank to create a smooth carapace. Some used the corrugated flex portion of the straw and some did not.

The carapace on the Whata-shrimp uses the corrugated portion of the straw, split and glued to the top of the hook shank. I like the split straw better because it reveals the leggy area on the belly of the fly and seems a bit more realistic. In reality it may not make any difference at all, but it sure looks good. The colored straws used for the Whata-shrimp are called "Neon Straws" and are available just about everywhere. A box contains pink, blue, yellow, orange, and chartreuse straws- good colors for shrimp and crab flies. With a little color enhancement from a permanent marker you can make an amazingly life-like carapace from these straws.

One key to the durability of the Whata-shrimp is to coat the inside of the straw with clear DAP Kwik Seal before you anchor the straw down with thread. This will permanently affix the straw to the body of the fly and protect it from cracking or tearing loose. If you have not yet tried DAP for your tying, you should. It is remarkable stuff. It is water-based (NO FUMES!), glues darn near anything together, and it dries crystal clear and tough as nails. You can get it at most hardware stores.

The Whata-shrimp shown here is tied on a #2 hook in a caramel color scheme. The straw carapace can be shortened and slimmed down if needed to accommodate #4 or #6 hooks. By using different colored straws and permanent markers, this patterned can be tied in nearly any shade you prefer.