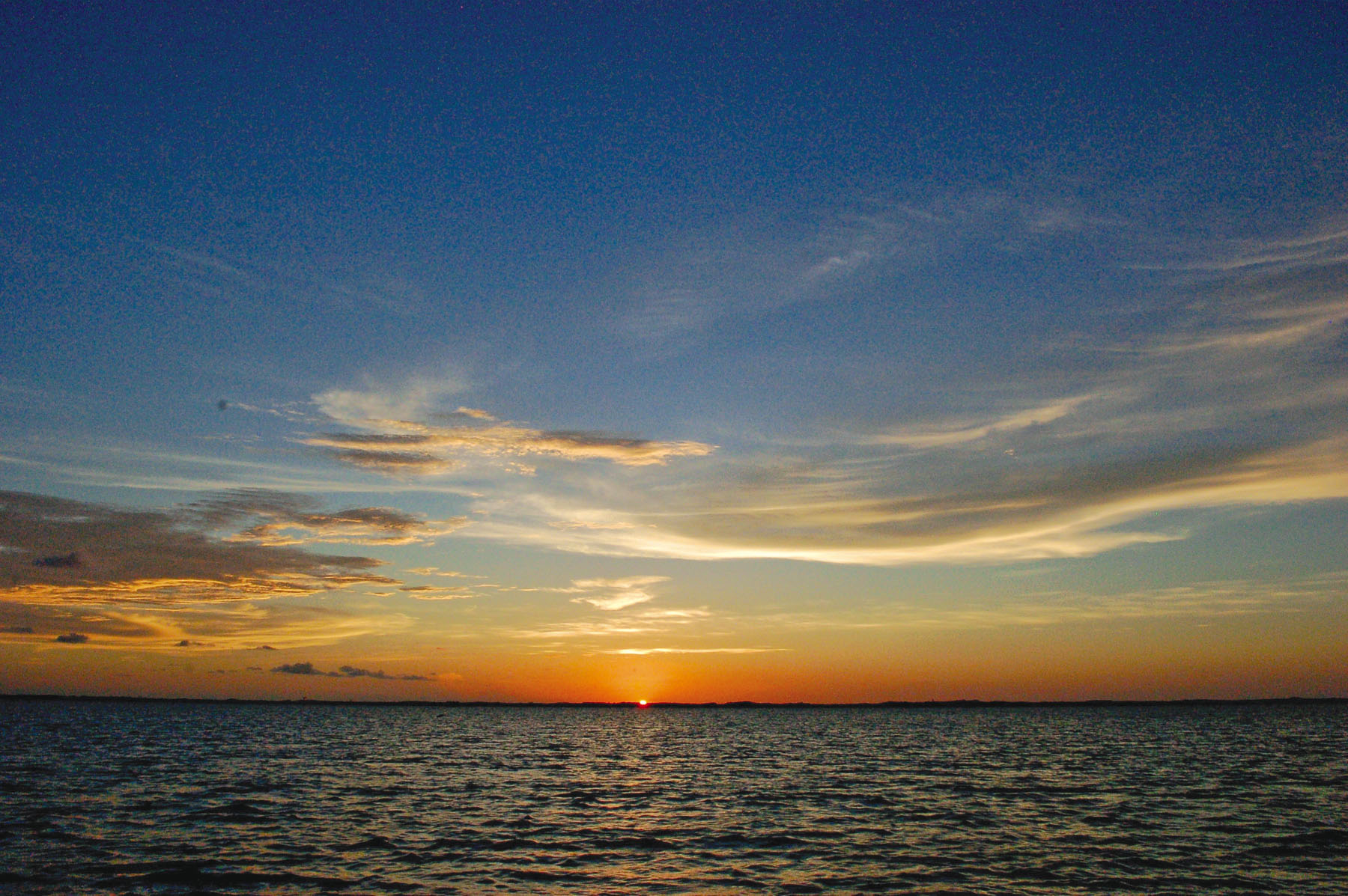 Squinting against the blistering South Texas sun, my friend Larry pointed to a large expanse of tan-colored water that stretched out ahead of our idling boats. "That's all shallow sand, Casey. It runs for about a mile to the south. The fish will be up there this evening. You'll see them. We'll meet you back at the cabin at dark. Good luck." Larry pulled away and I watched as it slowly shrunk into the distance, bound for Baffin Bay.

I eased my skiff up to the foot of the giant sand flat and gently beached it on a high spot. The bottom of the flat was clean and hard, with wind-carved ripples firm enough to feel through the soles of my boots. Several light green veins snaked across its center, revealing subtle dips and pockets. Looking toward the horizon I could see the curved green boundaries where shallow sand abruptly dropped to deeper water. To the east were the weathered white dunes of Padre Island and to the west was the thorny King Ranch shoreline. I just stood there for a few minutes, taking it all in.

The expansive feeling of this place was wonderful. The sky was broad and full, and the vast stretch of tan and green water before me held so much promise. A steady Gulf breeze pushed across the shallow water and seeped through the sleeves and collar of my shirt. It felt good to be there at that moment. It was a feeling of freedom.

I grabbed my fly rod and a couple of flies and I started walking. The terrain was different from the soft olive bottoms and oyster reefs I was accustomed to farther north. Stark but pristine banks of sand rose up along the shorelines and the shallow bottom had pancake textures that were smooth and clean. The whole place was shaped by relentless winds and baking sun, and it fit perfectly with raw beauty of the surrounding Brush Country. It looked like terrific land to explore but an awful place to be stranded.

I waded a few hundred yards down the flat, wondering if I would see any fish. I could clearly make out hundreds of tiny worm holes scattered over the bottom, so surely a big lumbering fish would be visible in the skinny clear water. And then my eyes caught something moving across the sand. At first it appeared to be a shadow cast by a bird flying overhead, but moments later I could see the outline of a large purple torpedo-shaped object. It was a redfish a big redfish.

He was swimming slowly and deliberately in my direction. I could see the crosshatch pattern of scales on his exposed back in the ankle-deep water. As he approached, his body arched and his large blue tail rose up slowly from the shallow water. It hung in the air for a moment and then gently folded over and wiggled as his jaws crunched down on something hidden in the sand.

In contrast to his bleached surroundings, the redfish's silvery blues and crimson reds were unnaturally vibrant in the evening sun. Drifting over the pale sand, he looked as colorful and preoccupied as a big tom turkey strutting at close range. I froze and watched him for a few minutes. Finally, I decided to toss a fly out in front of him. As I flicked out a short cast I was almost certain he would spot my arms moving, but he didn't.

My fly landed a few feet in front of the redfish and settled to the bottom. I gave it a twitch and he accelerated and then stopped abruptly, nearly running over the fly. His rear end lifted out of the water, almost as though inertia alone had carried it upward. A small fiery flash of bronze sparked from his gills and I knew he had grabbed the fly. My line pulled tight and he tore for deeper water, leaving behind a trail of sandy froth.

Although large and strong, he tired quickly in the warm shallow water. In a few minutes I slipped my hand under his belly and lifted him up to remove the fly. He was healthy and fat, with broad shoulders and gold-rimmed eyes that were clear and alive.

At that moment I did something I had not done in a very long time. I reached into my back pocket and pulled out a short piece of rope to use as a stringer. Earlier that afternoon there had been talk of grilled fish at sunset. It sounded like the perfect way to end a day on the water so I agreed to contribute a fish if I caught one. But as I uncoiled the rope and looked at the redfish, I hesitated.

Years ago, I kept, cleaned, and ate fish of all kinds. Most were palatable, some were not. But the longer I fished, the more I realized what brought me the most pleasure was catching fish and then watching them swim away. So I started releasing everything I caught. I was simply doing what made me happy. Over the years I encouraged others to do the same but certainly didn't fault them if they chose to keep what they caught. After all, like me, they were just doing what made them happy.

And so I looked again at that wonderful redfish and his magnificent surroundings. It was clear to me I had already been given enough gifts for one day why ask for more. I shoved the rope back into my pocket and slid my fingers down the leader to the small hook lodged in the redfish's lower jaw. With a quick twist the hook snapped free.

I eased the redfish back into the water and slowly let him gain back his strength. And then with a burst he swam out of my hands. I watched as he slowly pushed across the flat in a deliberate straight line. When he reached the edge, he disappeared into the safety of deeper water. I looked back down the flat and couldn't help but smile. It was the old familiar feeling of freedom.