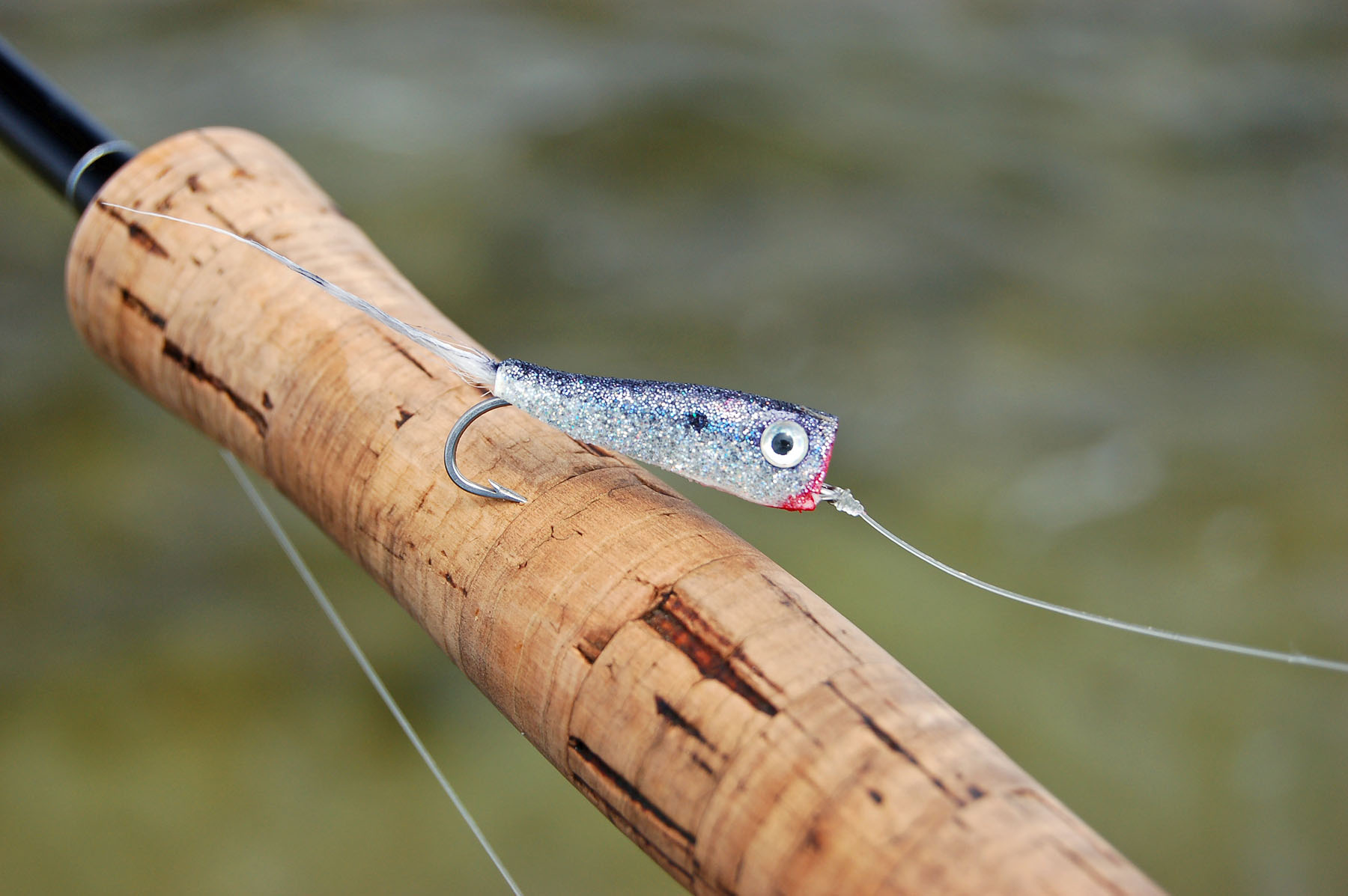 The entrance to the lake was marked with a slender white-washed bamboo stake that had mysteriously withstood the assaults of the wind and tide and remained upright under the grip of countless off-balance birds. My friend Dusty Mayer and I paddled quietly toward the stake, navigating around the elbows and oysters of a narrow creek. As we closed in on the bottleneck leading to the lake, mullet accelerated and boiled around us and I looked over my shoulder to make sure my Dusty hadn't disappeared. To my surprise he was paddling quietly only a few feet away. It reminded me that although Dusty was new to fly fishing, he was a veteran paddler.

We hopped out of our boats and dragged them around a shallow mud bar and through the neck of the lake. The far side of the lake was barely visible and the expanse of water before us was crystal clear. Mullet, silenced by the steady wind, leaped in the distance. I prepped a small root-beer colored shrimp by dunking it in the water a few times and then laid my fly rod across the bow hatch of the kayak with a few loops of line beneath it. The plan was to lead our kayaks across the lake, sightcasting reds as we went.

A few yards into the wade I spotted a big purple red floating across the sand. My first cast landed a few feet out in front of the red and I gave the shrimp a little twitch. "This is gonna' be good," I thought as the red spotted the fly and surged toward it. But he stopped short with the shrimp at the tip of his nose, gave it a sniff, and turned away. As he swam off, his body language left little doubt we were going to have to do better than that. The same scenario repeated itself 3 more times over the next seventy yards.

Remembering some photos of a minnow-stuffed redfish Aransas Pass angler Charlie Golla had sent me several days earlier, I thought about the micro-sized Crease flies stuck between the Clousers in my fly box.

"I'm thinkin' we ought to put on a baitfish pattern Dusty... maybe a small topwater." Dusty glanced at the shrimp pattern I had given him a few minutes earlier. "That's alright, Case. I don't want to use up all your flies." I opened the lid on a large flat box in the kayak and flies literally spilled out of it onto the floor. Dusty looked at the pile of flies and said, "Dude... you have way too much time on your hands." I plucked a small Crease Fly out of the creepy tangled mass of legs and hair and tossed it to him. "Here, put this on." He obliged and we moved on, following the current up the bank.

A hundred yards up, we noticed some nervous water along a finger of grass that jutted out into the lake. Dusty anchored his kayak and flicked out a cast. I was watching for a blow up on his popper as I made a half-hearted cast toward the other end of the grass. A surprise fish darted out of the grass and whacked my Crease fly. In a classic topwater blunder, I jerked it away from him. "Nice move," I thought. We made a few more hopeful casts and then slipped up the shoreline.

Near the top of the lake there was a beautiful comma-shaped creek that careened through the grass and emptied onto a small crooked flat. Windblown lake water surged through the creek and we figured the fluvial area on the other side would be holding a few fish. As we entered the creek, a big fat pink tail appeared mid-current and began to wiggle in the evening glare.

I made a cast toward the red but it landed a few frustrating feet short. The Crease fly zigged and zagged in the current and all I could really do was hope the redfish would see it before he saw me. I gave the fly a little tug and the redfish's tail slipped below the surface. A second later, he came up from below and lurched over the top of the fly with a sharp "chuck" sound. I paused a moment and then set the hook. He was on.

The current pushed on the backs of my legs and strengthened the red as he bulldozed downstream. My fly line stretched and sagged toward the sun. For a moment under the broad swash of evening sky in that narrow creek, I felt almost like I was fishing on a prairie. A few minutes later the red swam out of my hands and back into the warm current of the creek. What a privilege. What a place.

The following day, Dusty and I were back at the lake. We made a long drift down the lake's western shoreline toward a distant corner. The corner was shouldered by a series of small crescent-shaped sloughs and was split by a broad flat creek too wide to cast across. This meandering creek too looked like it had been lifted straight from the Wyoming grasslands.

We anchored our boats near the creek and waded toward one of the horseshoe sloughs. The slough looked suspiciously like one of those quiet backwaters that lures you in with the promise of fish and then breaks your spirit with thigh-deep mud. Dusty recognized things might get ugly in there, so he opted to stay on the hard sand, and meet me around on the other side.

As it turned out, the mud was only shin-deep and it was dotted with rooting redfish. I glanced back to the mouth of the slough to wave at Dusty, but he had disappeared behind the grass. All I could see was his fly line whipping back and forth above the mangroves. "That's a good sign," I thought. Thirty minutes later I reached the other side of the slough and Dusty came sloshing through the grass sporting a nervous smile. "Case... I scored on a red! I saw something moving in the grass and cast up toward it. This red came charging out of nowhere and just nailed my fly. Man it was cool!" "Did you land him?" I asked. "Heck yeah I landed him."

We were both all smiles making a careless wade back to the kayaks, talking about flies, fish, and fishing... thinking we had somehow unraveled yet another secret of the marsh. When we got to the boats I remembered there was some spicy fried chicken stashed in the ice chest. I don't know what it was maybe we were just ravenous from the sun and salt, but man that was some good chicken! Evidently the gulls thought so too, because in a matter of minutes there were forty of them squawking over the slick that had formed downwind of our boats.

We watched the gulls for a while and then hopped in our kayaks, both knowing it was time to go. Funny how you and your fishing buddies just sort of quietly know "when it's time to go." We took a slow steady pace back toward town, riding the currents from lake to lake, telling stories, and marveling at the wonder of it all.