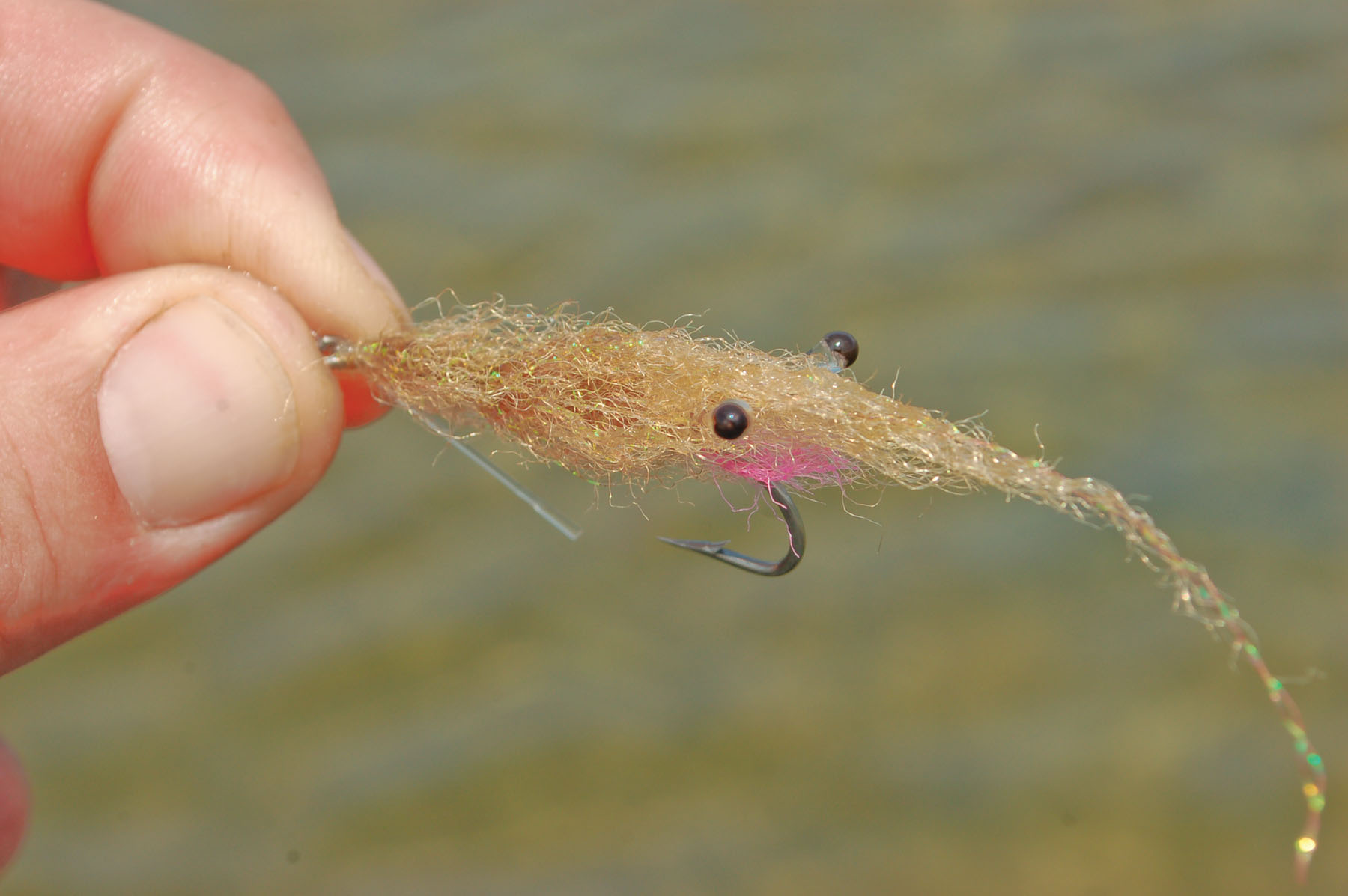 The past few months have been riddled with very tough fishing conditions. Relentless winds (characteristic of our region's returning drought conditions), have rendered large sections of the calendar unfishable, and left only a modest cluster of days that could be reasonably considered for fly fishing. There is really nothing any of us can do about it, but after a while nagging weather patterns become frustrating for everyone, and leave farmers and fishermen alike watching and waiting for a break.

Taking advantage of what promised to be a few days of tolerable weather recently, I met with a friend of mine, John Carpenter, in Aransas Pass for a kayak fly fishing trip. John is an expert fly-tyer who creates some very compelling flies. He's also a talented artist with a keen eye for design detail. I always look forward to seeing what he can crank out at the vise.

When I pulled out of New Braunfels, loaded down with kayaks and fishing gear, the winds were light and the skies were clear. But several hours later nearing Sinton, the truck was wavering against a powerful southeast wind that laid the canebrakes over. It was obvious there would be no break in the windy weather after all.

John and I met outside of Aransas Pass and unloaded our boats in the 20-knot gusts. We were disappointed with the conditions, but happy at least to be going fishing. So, we strapped our hats down, cinched our life jackets tight and paddled toward the protection of a place called the Lighthouse Lakes.

The Lighthouse Lakes is a labyrinth of shallow lakes, islands, and creeks near Aransas Pass. It is a well-known and popular destination for kayak anglers and skiff fishermen. In spite of its popularity among anglers and its location near congested tourist destinations, the natural beauty and integrity of the Lighthouse Lakes area has remained relatively unblemished. It is a wonderful place.

The water in the Lighthouse Lakes usually stays clear during inclement weather and the large stands of mangroves and cord grass lining its shores offer protection against strong winds. During periods of very low tides, the lakes literally dry up and are inaccessible. But when the tides return, the dormant flats and creeks magically come back to life. Shallow poling skiffs and kayakers regularly venture into the lakes, and in the fall airboats show up with duck hunters. In general though, the Lighthouse Lakes has a quiet, pristine feel. It is one of my favorite places to paddle and fish, and I sincerely hope it remains clean and wild for years to come.

John and I crossed a short stretch of open water and then paddled our way about a mile up the South Bay shoreline on the west side of the Lighthouse Lakes. We cut through a narrow slough along the outer shoreline and entered the Lakes. From there we paddled another half mile back to a slender passage that popped out on a large shallow hard-sand lake. A prominent and unpleasant wind raked across the lake, pushing against our boats and leaving the surface streaked in white lines.

To our right was a broad expanse of very shallow water with the east shoreline barely visible in the distance. On the leeward shore to our left, the mangrove roots and exposed sandbars were trimmed in foam and small bits of floating grass. No doubt, the wind was going to be a nuisance, but otherwise the conditions were tolerable. The temperature was mild, the skies were blue, and the water was clear. We were there, ready to fish, and that was good enough for us. We hopped out of our boats and started wading across the seemingly endless expanse of ankle-deep water.

About fifty feet into the wade we were greeted by a wonderful sight. Directly in front of us was a large redfish plowing carelessly through the choppy water. He was moving away from the bank swimming directly into the wind with this tail waving above the surface. I stripped off about 60 feet of line and after making a couple of terrible casts I managed to drop a small gold fly about five feet in front of him. The red surged toward the fly, took one look at it and then blasted toward the horizon. "Well you blew that one," I muttered to myself.

We continued ahead, wading quietly and scanning the choppy water for signs of fish. About twenty yards ahead we spotted two more reds rolling on each other in the short choppy waves close to the bank. John made several false casts and then plinked his fly near them. The reds saw the fly and sulked away, clearly irritated at the interruption. It was disheartening. Things seemed to be quickly shaping into one of those frustrating deals where you find feeding fish, but you can't catch them. I took it as a cue to try a more subtle approach and tied on a small brown shrimp fly that had always been a great producer. It was worth a shot.

We waded another fifty yards and I glanced back over my left shoulder at some "used up" water. I suddenly saw a group of three reds grinding down the bank headed away from us. We had missed them. I made an awful-looking Hail Mary cast at them. I knew full well there was no way this cast was going to hit the mark, but figured, "Why not try." Somehow the wind-blown fly landed right in their path. One of the fish rushed the fly, wolfed it down, and the fight was on. Yes! It appeared these fish must be feeding on small shrimp.

The same scenario repeated itself throughout the remainder of the half-mile-long wade. The wind was relentless and it made casting really tough, but fortunately there were plenty of fish. John and I both experimented with a variety of patterns and presentations, but the only flies drawing consistent strikes were small brown, nearly inert-looking, shrimp patterns. As the day drew to an end, we ended up landing a handful of reds, losing a few, and scaring the Hell out of a bunch. On the paddle back to the truck that evening, John and I talked about how funny it is that a rough old redfish digging aggressively through the sand can be so selective in what he chooses to eat. Just when we think we have them all figured out, they remind us we don't! I guess that's why we keep coming back for more.