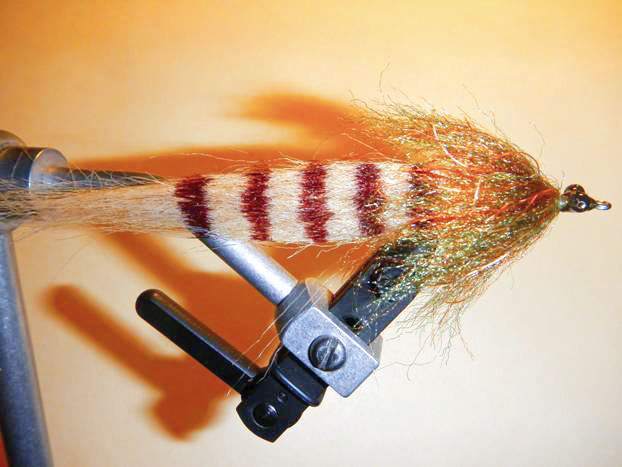 Tail barred with marker, fibers smoothed back and ready to fish.
"So, what are we throwing today Captain, Redfish Crack?"

When you find something that works, stick with it. And over the last couple years I've found a fly that seems to work just about every day and I wish I would have kept count of the fish that came over the gunnel with a "Crack" fly pinned to their lips. There have been many.

I was slow to become addicted to Crack but now I can't get on the water without it. It all began a few years back when Fishing Tackle Unlimited's fly fishing manager, Andy Packmore, mentioned a fly that reds never refused. I'd heard that line many times and dismissed it. I already had my favorites. Still, any time successful fishing trips came up, Andy would invariably comment that they were eating the good old Redfish Crack. I'd ask what the heck it was and he'd just grin and say it was a little something he'd come up with. I never pressed him on it because, like I said, I had my boxes full of things that worked.

Then I hit a slump, a really bad slump. Couldn't hit a fastball, curve or change-up kind of slump. My confidence flies were failing at a miserable clip. After a particularly rough day I stopped by FTU and once again Andy bragged on his damn magic fly. I finally swallowed my pride and begged for the recipe.

Knowing Andy's background as a freshwater trout guy I figured this was going to be some intricate pattern with more steps and materials than I'd prefer to mess with, but I was desperate. Andy went to his truck and brought back his cache of Crack. Huh? I was completely unimpressed. It was pretty basic and didn't really look like it imitated anything in particular. Then he explained how to tie one. It was entirely too simple No way this could be the fly he'd been bragging on. Perhaps Andy was just doing a little misdirection to keep me from the real deal, but hey, he had a whole box full of the darn things.

When you're in a slump you do what you have to, so I bought the materials and headed to the tying desk. I tied several in a matter of a few minutes and sat staring at them, still unimpressed. The following day I headed out to do a little scouting for some upcoming trips. I tied on a Redfish Crack and tossed it in the water to see what it would do. To my surprise the ugly little thing came to life. It still didn't really imitate anything in particular, but it had that good edible buggy look about it.

I started poling and hunting. The first redfish was headed away, likely having already sensed the skiff. It was a low-percentage chance, but I tossed the fly in front of him anyway. And he ate it. Cool. I took a photo with the Crack hanging from his lip and sent it to Andy. His response, "I told you."

Nearly every other red that morning followed suit. If I landed the fly even close to where it was supposed to be they ate it. I can't honestly say whether it was the fly or just the mood of the reds on that day, but whatever it was I had my best tally in quite some time. I was sold.

Perhaps I've fallen into the old fisherman's trap. "The only thing they're eating is (fill in the blank)." Ya know if that's all you're throwing then that's the only thing they'll appear to be eating, right? I really don't care though. The fish I tend to chase are visible and you can generally get a sense of how they feel about a particular fly or lure based on their reaction. Seldom has the reaction been negative.

So what makes it work? I've spent a good deal of time looking at this fly in the water and thinking about it. I'd have to say it has all the necessary attributes. The large head pushes water so it can be felt even in off-color water or when the cast is a little off target. The head and banded tail provide contrast making it more visible. The tail moves and breathes with the slightest twitch. The dang thing just looks like something that needs to be eaten.

It's also versatile; dare I say somewhat like the revered Clouser? I look at it as more of a style of fly than any particular strict recipe. While my favorite version uses the colors depicted in the photos on the step-by-step, I've used most every color combination you can think of. Typically I tie it on a size-4 size hook, but my box has them from size-8 all the way up to a 1/0 tarpon style hook for the those big bull reds in the Louisiana marsh. It can be tied unweighted, with beadchain eyes or lead, depending on your situation.

While it was originally intended for targeting redfish, I've caught plenty of trout, flounder, black drum and even the wary sheepshead on them. I even took a small sparsely tied version to Belize last year and picked off a couple bonefish. The permit wouldn't eat them, but they wouldn't eat anything.

All of that is great, but perhaps my favorite thing is the simplicity and ease of cooking up a batch. Being a guide I go through a good many flies and when the fishing gets hot I don't always have a lot of time to sit at the vise. Once I have the materials out and everything set up it's easy to knock out a dozen in thirty minutes.

If you've read this far I assume you're sold, so here's the basic recipe I use for redfish in my favorite colors. It's a little different than Andy's original and I'm sure you'll come up with some of your own variances.

1 -Attach the eyes (if you choose to use them). Wrap the thread to the bend of the hook.
2 - Attach a small bunch of craft fur and touch it with a thin glue or head cement over the thread.
3 - Two or three wraps of medium cactus chenille over the thread holding the craft fur.
4 - Tie in a 3" section of the EP brush just in front of the chenille and work the thread back to the eyes. Wrap the brush towards the eyes. With each wrap pull the fibers back to keep from binding them with the next wrap. Don't fret too much about it as you'll fix any bound up fibers in a minute. Secure the end of the brush which should end up tight to the eyes or the eye of the hook.
5 - Whip finish and coat with head cement.
6 - Use a bodkin to pick out the bound EP brush fibers.
7 - Use a dark brown permanent marker to bar the tail.

EP has a wide variety of dubbed brushes from one half inch wide up to five inches. I've used them all to create various sized Crack flies. All you need to do is change the hook size to make it proportional to the brush used and overall size of the fly. Another option is to use EP fibers for the tail on larger flies since the craft fur will be a bit too short. The EP fibers don't move as seductively as craft fur, but they'll work if you need a longer tail.

Give 'em a try if you dare, but be aware that Redfish Crack is highly addictive and may cause you to shun all your other flies.