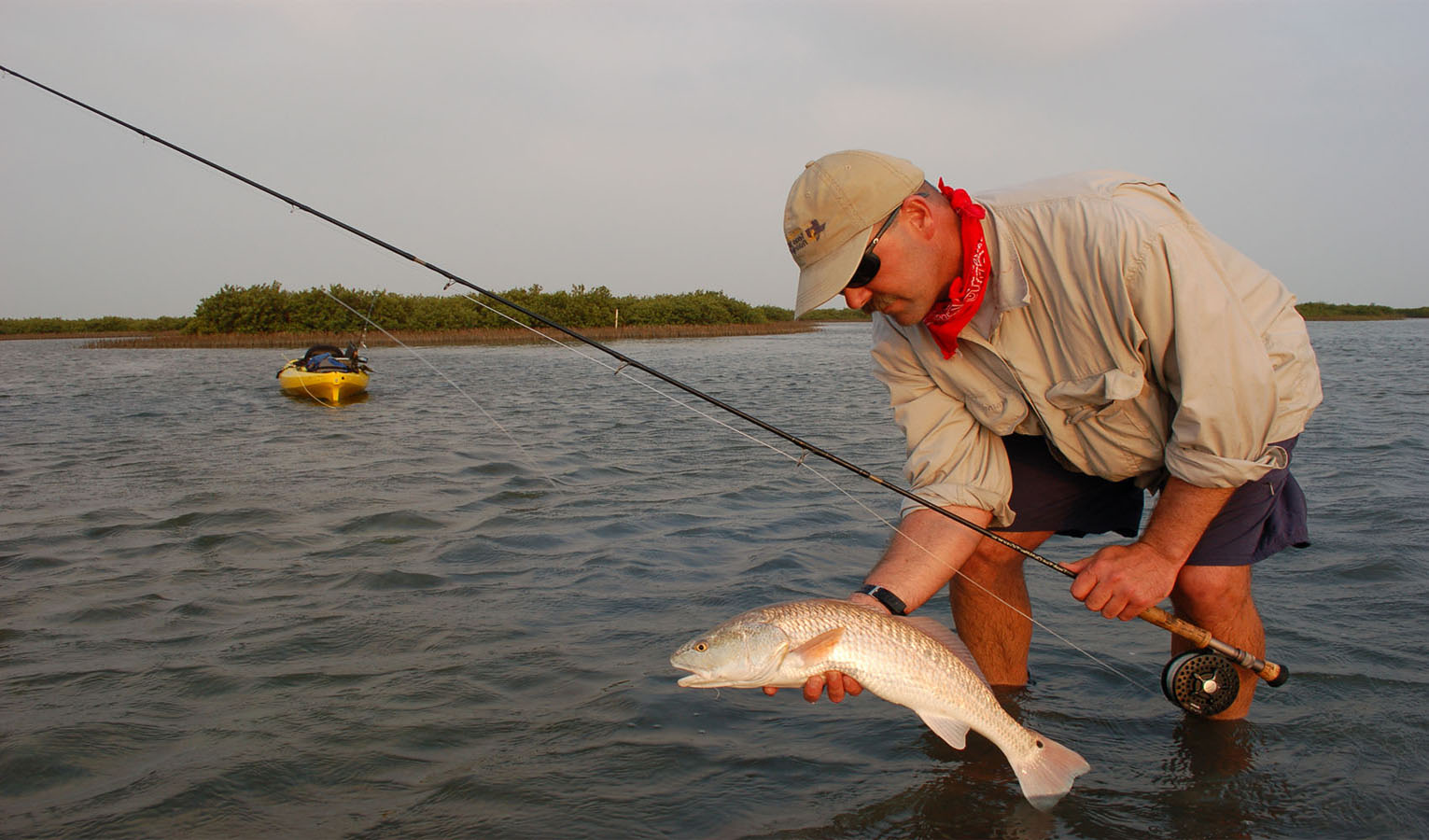 Photo by Jon Fisher.
"We're coming to AP and bringin' our game face," I joked over the phone to my friend Dean Thomas in Aransas Pass. "You better have your game face on, because it's ugly down here brother," he replied. It was overcast and the wind had been blowing 15-20 knots out of the SE for nearly a week. It was projected to blow even harder for the next 2 days.

I would be fishing with my buddy Jon from San Antonio. Our plan was to kayak into a protected area of the marsh near Aransas Pass. We figured we could duck behind the mangroves and dodge the worst of the hat-blasting gusts long enough to find a few targets feeding in the windblown currents.

We arrived in AP around noon and by mid afternoon we had paddled our way back to a large tidal lake with a hard sand bottom. The water in the lake was clear but there was a significant chop on the surface and the sky hung low and grey. We knew the fish in this lake would be tough to see.

About 100 yards into the wade we started noticing irregular wrinkles and boils scattered ahead of us. We weren't quite sure what they were, but they were definitely made by some sort of fish. Jon snuck up on one of the mysterious swirls and started casting at it. After a half-dozen tries he dropped his fly in the right spot and a redfish busted it.

That redfish convinced us that the funky ripples peppered across the shallow lake were indeed feeding reds and not mullet or other ghostly creatures. And although we could not see the reds at all, we could see slight, almost imperceptible disturbances that gave away their locations. The tough part was making casts that accurately hit the strike zone of invisible fish. It was what you might call "intuitive casting."

Intuitive casting falls into the grey area between sightcasting and blind casting. With intuitive casting you never actually see the fish you are casting to, but you see a signal or combination of signals that tells you the fish is there. These signals are site-specific disturbances like subtle wrinkles or lumps in the water, jumping shrimp, head-wakes, swirling bubbles, or plumes of mud. Your challenge is to quickly visualize the position and direction of the fish based on what you see and intuitively cast your fly at the strike zone.

The key to hitting the strike zone is to correctly predict which direction the fish is headed. For example, if you are casting at a head-wake you must aim well ahead of the wake to intercept your target. If you are casting at a stationary swirl or boil, you should drop your fly on the upwind or up-current side of the disturbance- not directly on it. You are trying to put the fly in the strike zone, not on top of the fish. It's not easy, but intuitive casting is a valuable skill and pretty cool when you pull it off.

Most of us have made intuitive casts at one time or another whether we consciously knew it or not. Have you ever shot a hopeful cast at a head wake? Or, perhaps you have fished on days when the water clarity or visibility was so bad there was no way you could actually see a fish below the surface, so you made a few casts at swirls or boils along shoreline. Or maybe you've fished with a partner who could see fish better than you. He tried to guide you to them while you eagerly scanned the water for any signs of life. In each of these situations your eyes were fixed on a visual signal, not an actual fish.

Intuitive casting skills are important for several reasons. First, not everyone has the opportunity to fish clear water. Some water bodies hold plenty of fish, but they are perpetually turbid, so anglers rely on visual anchor points to make casts. Another reason intuitive skills are important is that sometimes fish are extremely tough to spot even though the water is quite clear. Perhaps an evening glare turns the surface into a choppy mirror, or the combination of tide, wind, clouds, and the position of the sun significantly impairs visibility. But the most valuable part of intuitive casting is that it allows you to adapt to a wide variety of conditions on the flats, and that makes you a better angler.