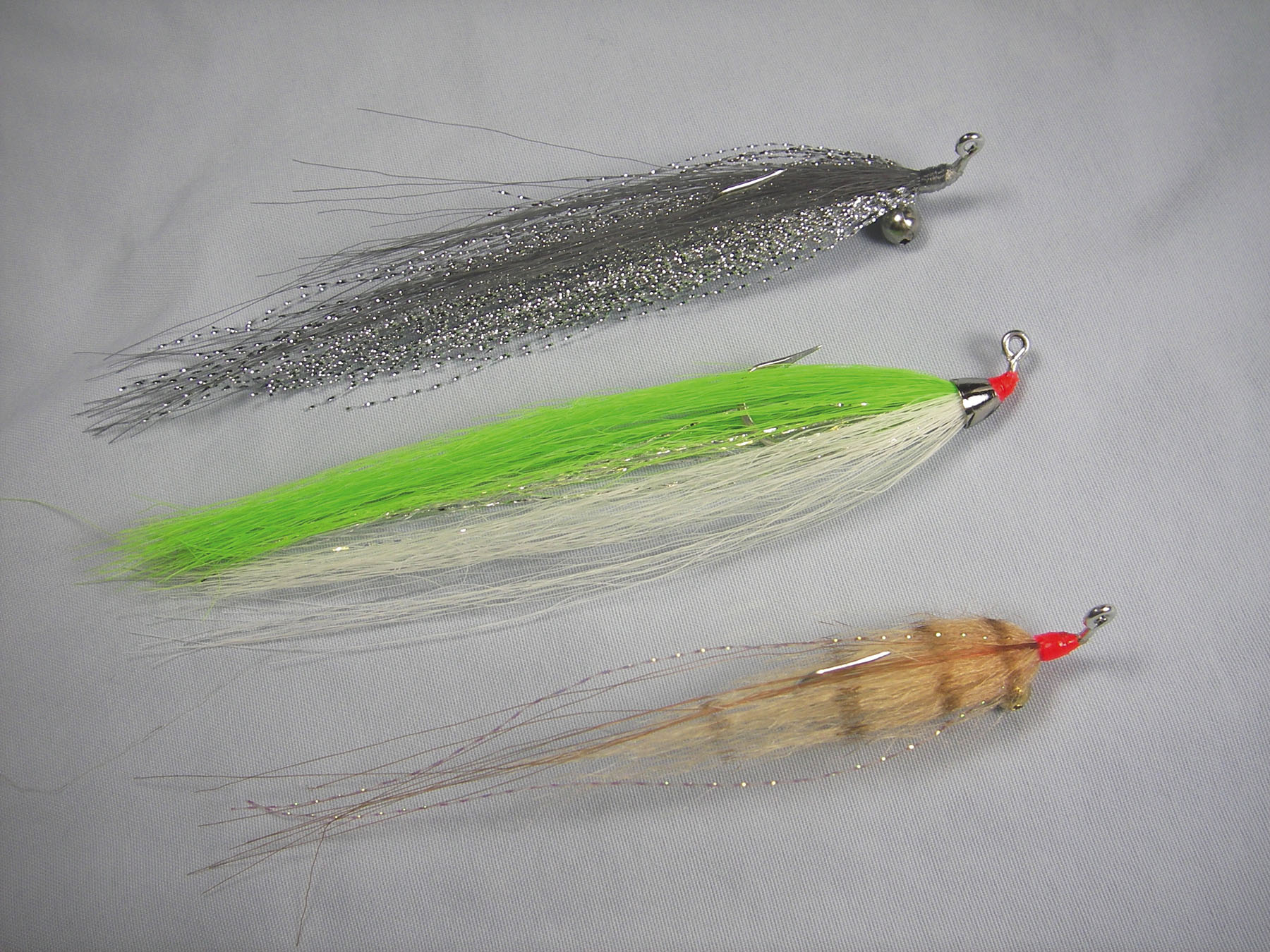 3 flies ties on Eagle Claw 413 jig hooks. Top to Bottom- Chrome Clouser, Popovic's Jiggy, and Swimming Shrimp.
Jig hooks have been around for a very long time. Some of the earliest lures were built on jig hooks and many-a-fisherman began his/her career either tossing jigs at bluegills or bouncing them up and down in front of crappie. I can remember whipping a lot of fish with a Zebco 202 and a "speck rig." They were deadly, and still are. But in spite of their popularity among conventional fishermen, jig hooks have been slow to catch on in the fly fishing world.

But in recent years, a number of fresh and saltwater fly fishers who tie their own have taken a closer look at jig hooks. They are rediscovering the jig hook's merits and cranking out some really good flies on them. Let's take a closer look at the jig hook design and how/when jig hooks can be used in fly tying.

Hooks with a 90 bend are often used to build what we recognize as classic vertical jigs. These lures usually have dense molded lead heads and are intended to be dropped straight over the side of the boat and bounced up and down over deep structure or trolled. Alternately, hooks with a 60 bend are designed to be cast out and retrieved in a more or less conventional manner, bouncing across the bottom. The slightly upturned nose of the 60 is good at sliding over structure and maintaining forward motion. For most fly tying applications, the 60 jig hook is more versatile and practical than the 90 and a good fit for a variety of subsurface fly patterns.

When you start looking for jig hooks, the first thing you'll discover is that most hooks are either too small and flimsy for saltwater work, or way too big and bulky for standard-caliber flies. The exception is the Eagle Claw 413, which is the hook I am currently using. The 413s are decent hooks. They are reasonably priced, acceptable in quality/strength, and available in sizes down to #2. In fact the #2 is what I most commonly use. If you need to go smaller than #2, take a look at the Targus 9413 jig hook. The 9413 is a knock-off of the Eagle Claw 413, but it is available down to #4. Gamakatsu also makes jig hooks, including one called the "Jig 60." As you might expect, the Jig 60's are just plain scary, sticky, prickly pear sharp. But unfortunately they are designed for bass fishermen slinging soft plastics and are available only in very large sizes. From the standpoint of price, availability, and selection, the Eagle Claw 413 is your best bet. A good source for them (and just about all your fly tying supplies) is www.saltwaterflies.com.

If you step back and look at which flies could honestly be improved with jig hooks, there are two patterns that immediately come to mind the Clouser Minnow and the Bendback. These are staple flies that are tremendously effective in a variety of applications. One of the key features of both patterns is that they ride with the hook in the upright position. This makes them perfect candidates.

By most standards the Clouser Minnow is nearly a perfect fly. Anyone would be hard-pressed to improve upon its simple design. But, when you tie a Clouser Minnow on a jig hook, several improvements are made. First, the nose of the fly is slightly upturned, making it less prone to plow into shell, rocks, and weeds. The second improvement is that Clouser Minnows tied on jig hooks will almost never, and I mean never, twist or turn upside down during the retrieve. The combination of an offset hook shank and weighted eyes makes the fly run upright and true every time.

Besides the Clouser Minnow, the Bendback is a fly that most saltwater fly fishermen have in their box. The Bendback is light, weedless, and easy to tie. But it has one minor flaw the bend itself. When tying a Bendback, the very first step is to make a subtle bend in the shank. This bend, along with correct placement of material on the shank, causes the hook to rotate to the point-up position. But the problem is that when the shank is bent, the plane of the hook point is no longer in line with the plane of the eye of the hook. The hook points only slightly upward. So, when you set the hook using a Bendback, the hook point enters at a slight angle. If it's not needle sharp, the hook sometimes scrapes across its target rather than sticking in it. The more bend you place in the hook, the greater the problem. But, if you tie a Bendback on a jig hook, this problem is eliminated because the plane of the hook point is in line with the plane of the eye/leader. Additionally, the upturned nose of the fly allows it to ride over weeds better than if the fly was tied on a straight shank hook.

The Clouser Minnow and Bendback are just two examples of flies that can be tied on jig hooks. There are many others, including Popovic's Jiggy's, Whistlers, and swimming shrimp patterns. If you would like to get some jig hooks and see for yourself if they are worthwhile, my suggestion is to buy a pack of #2 Eagle Claw 413s and get after it. With a little practice tying and a good opportunity to try out your creations, I think you will be pleased.