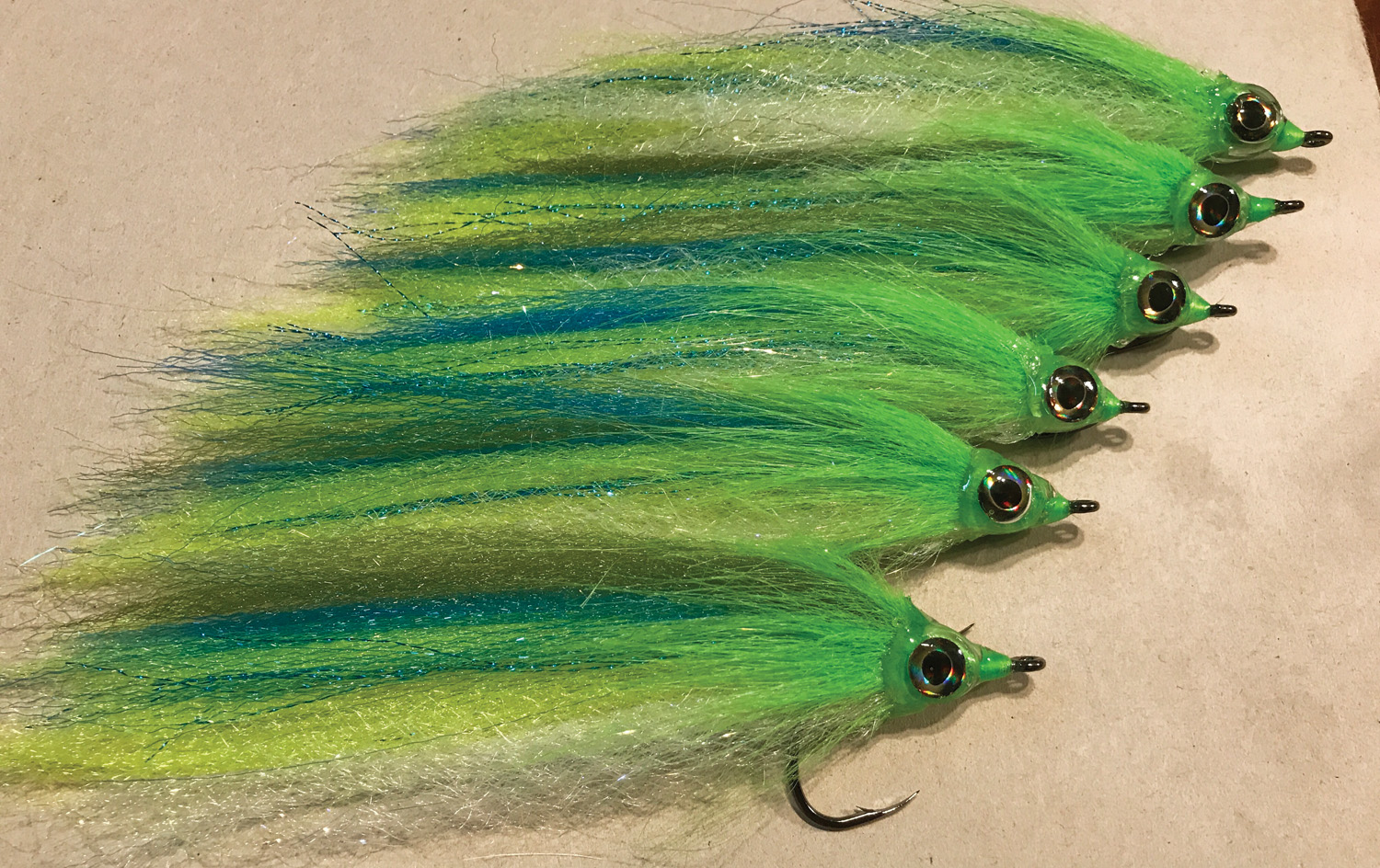 I have now witnessed snow on South Padre as well as Grand Isle in the same winter. I’m over it. Unfortunately, I foresee at least another four weeks of winter, no matter what that Yankee rodent up in Punxutawney, PA has to say about it. I’m guessing four weeks because that’s how much longer I’ll be guiding for bull reds in Louisiana this winter. I figure that as I drive off the island, headed back to Texas on February 28, the winds will be calm with definite signs of spring.

So, what’s a fly guide to do when he’s stuck at fish camp and canceling trip after trip, due to bad weather? Well, dream of warmer days and restock the fly boxes!

I’m pretty sure I’ve tied enough of my Redfish Crack flies to last me through next fall. Once the bay boxes were jammed full, thoughts turned to summertime beachfront fishing. With the new Dargel Kat now in the stable, I’m hoping to hit the nearshore waters around Port O’Connor as soon as those first migrants arrive on warming currents.

Large flies for kingfish and other big critters that roam offshore are expensive. And, due to their sharp dental work, those high-dollar flies don’t last long. As I rummaged through the piles of miscellaneous materials I brought with me, I ran across a cache of supreme hair. I really don’t even remember why I bought it, or so much of it, but it has been patiently waiting at the bottom of a box. Surely, I’m not the only one who does this, right?

If you aren’t familiar with it, supreme hair is a fairly stiff synthetic fiber with a lot of kink to it. It reflects a lot of light and adds fullness without too much bulk. It is a bit too stiff in short lengths for my liking as it doesn’t move much, but at about four inches it livens up. For larger flies, the stiffness is desirable because it helps to keep the material from wrapping and fouling the hook. It is also cheap and very durable, making it perfect for bigwater flies.

Looking through the colors, I decided to tie a ballyhoo and a baby dolphin. Both patterns were productive for me back in my trolling days. After a little trial and error, I came up with something that was simple to tie and looked really good in the water. Nice sink rate, good movement, and by keeping them somewhat sparse with water shedding materials; they even cast pretty well…as well as could be expected for a seven-inch fly.

For the ballyhoo, I started with an extra-long shank Owner 7/0, (a 5/0 might be better, but that’s what I had on hand). The XL shank provides a little extra tooth protection as well as creating a nice beak for the ballyhoo.

I chose three colors of supreme hair; white, grey and light blue. The material is about 12-inches long and I used about a matchstick sized bunch in each, a little less is better than too much.After cutting your pieces, lightly pull at the ends to make them uneven and more natural looking.This will give you an overall length of 13- to 14-inches.

Lay the white piece along the hook and tie it in at about half an inch from the middle, making that first part of the tail slightly longer. Once tied in, coat the first three inches or so with Goop or Softex to stiffen it up a little. This will help with fouling. The remaining pieces of supreme hair won’t need the Goop. Now fold back the remaining portion that extended forward and give it a few wraps to make it lie down.

Tie in the grey piece in the same manner. On top of the grey, tie in a small amount of pearl Mylar or similar flash. Next, tie in the light blue about a half inch from the middle with shorter end extending back first before laying the longer end over the top. Varying the white and blue gives the fly a nice taper without having to trim it later.

Each of the above steps are tied on top of the hook. For added durability, flip the fly over and hit the threads with a little Zap-A-Gap. To give the fly a little more belly, place a small amount (about half as much as the supreme hair bundles) of Steve Farrar’s Flash Blend in UV white or something similar. This material is about 8- to 9-inches long and the ends are already uneven.Find the mid-point of the bundle and tie it along the side of the hook shank, then wrap the remaining portion over the top of the hook and lay it along the other side of the shank to tie it in place. Along the very top of the fly, tie in a few strands of peacock Flashabou and build up a head of thread to seat the mask. Seal the thread with cement.

For the head I used the clear Fish Mask and Living Eyes from Flymen Fishing Company. You could build a head with epoxy, but that stuff is a pain on a head this large. The Fish Mask is fast and easy. Put a little dab of Goop on the built-up thread and slide the mask into place. Hold it there a few seconds until the glue sets and then put the eyes in place. Start some black thread in front of the head and build a tapered cone to really lock the mask in place. Continue wrapping to the eye of the hook to make the beak. I also added a little section of red thread right at the eye, but it probably isn’t necessary, just wanted to. Seal the threads with cement.

You could probably stop there on the head but, for extra strength, I applied a coat of Loon UV clear fly finish over the eyes, around the edges of the mask and over the beak.

The baby dolphin fly was done using the same techniques. The only thing I added was a little chartreuse craft fur as a last step before the mask. Back when I trolled for kings, I also had a lot of success with red/white and pink/white lures, so I plan on doing a few of those as well.

If you’d like to try your hand at catching some beachfront beasts this summer, shoot me an email and we’ll get you on the calendar. As always, weather plays a big part in this game.Should Mother Nature wreck our plans we can always grab the poling skiff and divert to the flats to throw some of these Redfish Crack flies.