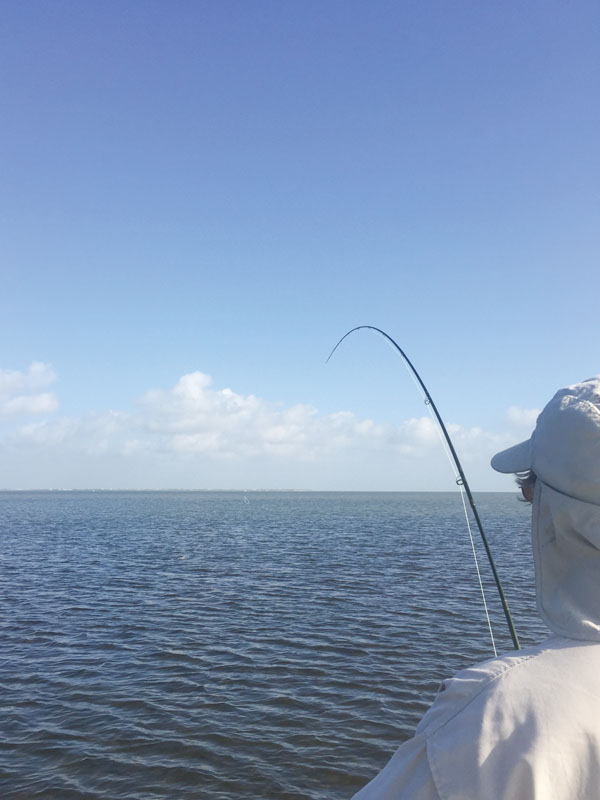 I don't know if it's just me, but it sure seems like fly fishing in the salt is experiencing some serious growth. It used to be a rarity to run across another bug slinger on the water. These days I seldom go a single day without seeing another poling skiff sharing a flat. While I'm sure a few grumpy old-timers are unhappy, I like it.

It isn't that I feel fly fishermen are superior and it doesn't make them special. However, most every fly guy I run across seems to "get it." By that I mean they tend to be conservation-minded and courteous toward fellow anglers. I know plenty of non-fly guys like that too, but it seems to be nearly unanimous in the fly community.

Most have graduated beyond only being satisfied with limits and freezers full of fillets. A single tailing redfish stalked and presented with a perfect cast is the goal. A day on the water with a good friend is good enough. The catching, while still fun, becomes secondary. If you're there, you know.

If you haven't gotten there yet, that's okay too. Some folks will likely never get there, but think about giving it a try. Go out for a day and don't worry so much about "limits by 9 am." Dial down the pressure to fill the cooler. Instead of being ticked off that somebody was in "your spot," go exploring and find something new. I bet you'll feel less stressed and start enjoying your time on the water even more than you already do.

Hardly a day goes by that I don't get a phone call or email from someone thinking about getting into fly fishing. Most mention they've fly fished in the mountains on vacation at some point or they did so as a kid. Now they want to try their hand at it in the salt. They'll ask if I can take them and teach how it's done. Others want to get started but are intimidated and/or overwhelmed by simply choosing the right equipment.

If you feel like I'm talking to you, keep reading.

First off, going with a guide is not the best place to start your fly fishing journey. I've been party to that and it can be pretty frustrating for the angler. The guide does his job and puts you right in front of fish you can see, but you can't make the cast. You try harder and it gets worse. By the end of the day you'll either go home and sell your equipment or vow to do what you should have done to begin with – learn to cast. I can help tune a cast out on the water, but starting from scratch on the boat is tough. The distraction of trying to catch a fish isn't conducive to learning proper technique.

My advice to those who want to get into this game is to first visit a reputable fly shop. No need to feel intimidated or embarrassed, everybody started off knowing nothing thing about it. With only a couple exceptions, every guy I've ever met who works in a fly shop is passionate about the sport and more than willing to help a newbie learn the ropes. Find somebody you connect with and ask them to explain the basics.

I struggled for a long time while stubbornly trying to figure it out on my own. Finally, I walked into the old Angler's Edge and met Anthony. I swallowed my pride and let him know that I didn't know what the hell I was doing, but was anxious to figure it out. Anthony laid it all out for me. Everything from explaining the rod weighting system to how a fly line works, to the knots used to connect everything. That afternoon was a turning point.

At the time, Westbank Angler hosted a free casting clinic at the Transco Towers ponds every Sunday morning. Armed with my newly-acquired knowledge of the equipment, I went. My self-taught cast wasn't pretty; I could get the fly out there a ways and in the general vicinity of the target – that was about it. As I stood at the edge of the pond flailing away, Andy Packmore from the shop walked up behind me. I'm sure he was suppressing his amusement as he dissected my cast and gave me a few pointers, a couple of which I still use today when my cast gets sloppy. By the end of that session I had improved quite a bit. I took his tips home and put in a lot of practice. I wish I had a dollar for every time one of my neighbors would ask if I'd caught anything while I cast to empty soda cans strewn about the yard.

Most fly shops have at least one guy who teaches casting lessons on the side. Andy now works at Fishing Tackle Unlimited on the Katy Freeway and is still happily dodging errant casts. It is money well spent. A few one hour sessions can serve as a solid foundation to get you headed in the right direction. I wish I would have done that. Sure would've saved me a lot of time trying to break some bad habits I taught myself.

Another great resource can be found in your local fly fishing club. In the Houston area we have the Texas Flyfishers, a great group that welcomes newcomers. Most regions of Texas have a club in the area. I just Googled "Texas fly fishing clubs" and found close to twenty. Most of these clubs will have some sort of beginner's class or program. And even if they don't hold a formal class, you'll likely be able to hook up with somebody willing to help you out.

Once you have the equipment figured out and feel comfortable enough with your cast, that's when you call somebody like me to help you put it all together and hopefully catch your first fish on fly. While the bow isn't the right place to learn to cast, it is the only place to learn how to actually fish with a fly. The presentation, the strip (retrieve) and even the hookset are different than what you're used to doing with your conventional gear. A couple days with a guide or experienced mentor can knock a whole lot of time from your learning curve.

So if you've been thinking about trying your hand at fly fishing, go ahead and do a little exploring at your local shop. The whole "snobby" fly fraternity thing is far more myth than truth. The fly guys I run with are some of the most down-to-earth good people I know and are more than willing to welcome you in.