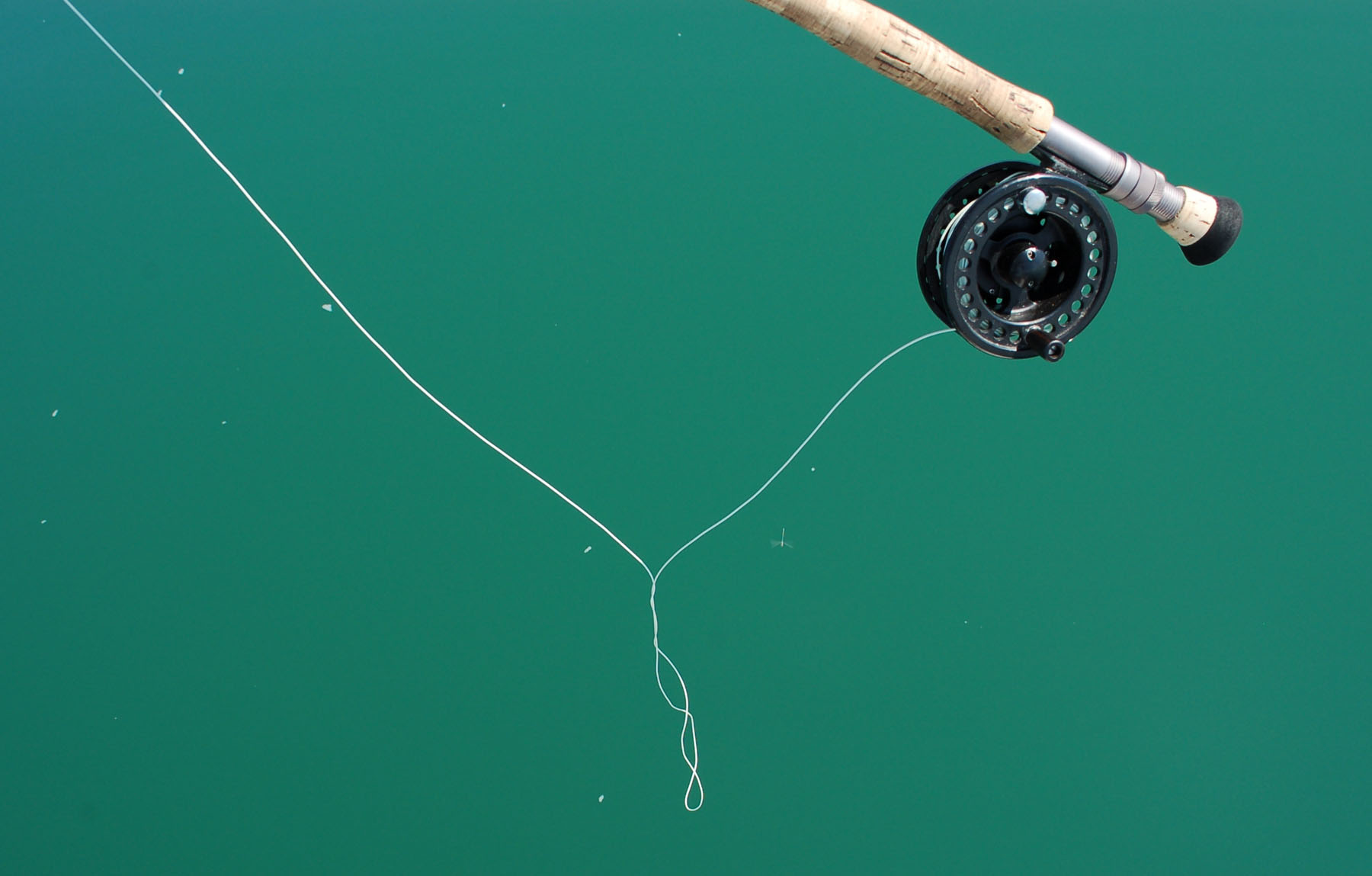 Twists in the fly line are caused by either a spinning fly or failing to clear all the fly line on each cast.

Saltwater fly fishermen are frequently required to make long casts under very tough conditions. Unlike freshwater fishing, where the rules of the game are more docile and defined, saltwater casters sometimes find themselves flying by the seat of their pants to manage their fly line and make tough casts. The combination of adrenaline and crazy conditions can lead to strange results. Not all of them are good. Some of the most frustrating cast killers are tangles, twists, and half-hitches that form in the fly line when an angler is struggling to get the job done. Here are a few examples of these maddening snags and ways you can prevent them.

Shooting line is a prerequisite for many casting situations requiring distance. To shoot line, a long length of fly line is stripped onto the ground or boat deck or into a basket. Several false casts are made to load the rod and then a sweeping powerful forward stroke is made at a high angle toward the target. The caster releases his grip on the line and the inertia of the head of the fly line pulls the loose coils through the guides at high speed. It is as though the angler was pitching a baseball with a long string tied to it. If everything goes right the loose coils of line are pulled cleanly off the deck and zip smoothly through the rod guides. But it doesn't always go right.

When we shoot line, we are expecting a long strand of loose fly line to pass through the relatively narrow guides on the rod at high speed. It's a lot to ask. Small twists and imperceptible ripples in the line can cause it to bunch up and snag as the line is forced through the guides. The symptom of this is either a cobble in the line in front of the stripping guide or a half-hitch of line thrown around the guide. Both will kill the cast on the spot.

This type of snag however, is easily prevented. Position your fingers slightly beneath the rod between the reel and the stripping guide. When you release the line on the forward stroke, form a loop (an "O.K." sign) with your fingers around the fly line and allow the line to slide freely through the loop. The loop will act like sort of like a "pre-filter," reducing ripples, tangles, and friction by funneling the fly line smoothly toward the stripping guide. This allows anglers to make longer, smoother casts with fewer hang-ups.

Few anglers (including me) take time to store their fly line in large loose coils after it's cleaned. They just reel it back up and pack it away. When they pull the line off the reel weeks or months later, the line has formed tight coils called "memory." If the line is dirty or old, or if the ambient air temperature is cold, the coils formed in the fly line are stiffer and more pronounced. The coils cause friction on the guides and can form stubborn tangles. Attempting to cast a fly line riddled with these stiff coils is futile.

Twists in the fly line are another aggravating problem and they are guaranteed to foil your cast. Twists can form in the fly line two different ways. The most common way twists form is when a fly spins during the cast or the retrieve. The second way twists form is a bit more mysterious. If a caster strips out more line than is needed for the cast, loose coils of unused line will rest on the deck of the boat or in the bottom of the stripping basket. As a retrieve is made, the stripping hand imparts little half and quarter twists to the line. These twists are subtle, and most anglers are not even aware of them. But after a dozen or so casts, the accumulated twists can cause the line may fold over on itself. If an angler continues to cast and retrieve without clearing the twists, the line can actually wrench itself into knots.

If you begin to notice twists in your line, find out what is causing them. Check the action of your fly first. If it is spinning, replace it with a fly that tracks straight. If your fly is not spinning, make sure you are discharging the full length of line on each cast. To remove twists in the line, cut off the fly and drag the full length of fly line slowly behind the boat for a few minutes. Or, remove the fly and make a very long cast. Pinch the line with your stripping hand and point the rod directly at the leader while you reel the line in. Repeat this 4 or 5 times and then check to see if the twists are cleared.

Anglers who double-haul fly line often experience the frustrating problem of the line forming a half-hitch around the butt of the rod or the reel handle as the line is released. I have experienced this problem many times. The cause of the problem is usually related to the position of the hands during the cast. If the stripping hand is pulled too far away or too far back from the casting hand during the double-haul, the line flies up behind the reel after the release and can snag.

The solution to this problem is to use short hauling strokes while keeping your stripping hand close to your casting hand. Some casters pull their stripping hand all the way down to their wastes when double-hauling. Although long sweeping hauls like this may seem powerful, they are inefficient and will lead to problems when the line is released and the rod is stabbed forward.

A second (more risky) solution is to tuck the rod butt against your wrist and rotate the palm of your casting hand toward the ground as you stab the rod forward at the end of the cast. The goals of this maneuver are to block the line from looping around the butt of the rod and to let the force of gravity prevent the line from snagging on the handle of the reel. But I'll tell you, this is a tough move to pull off and if not done correctly it can lead to substantial accuracy problems.

Regardless of your casting skills you will at times be plagued by tangles and snags. It comes with the territory. But when you discover a weak point in your cast don't ignore it. Find the root cause and correct it. This ensures an occasional hitch won't develop into a chronic problem.