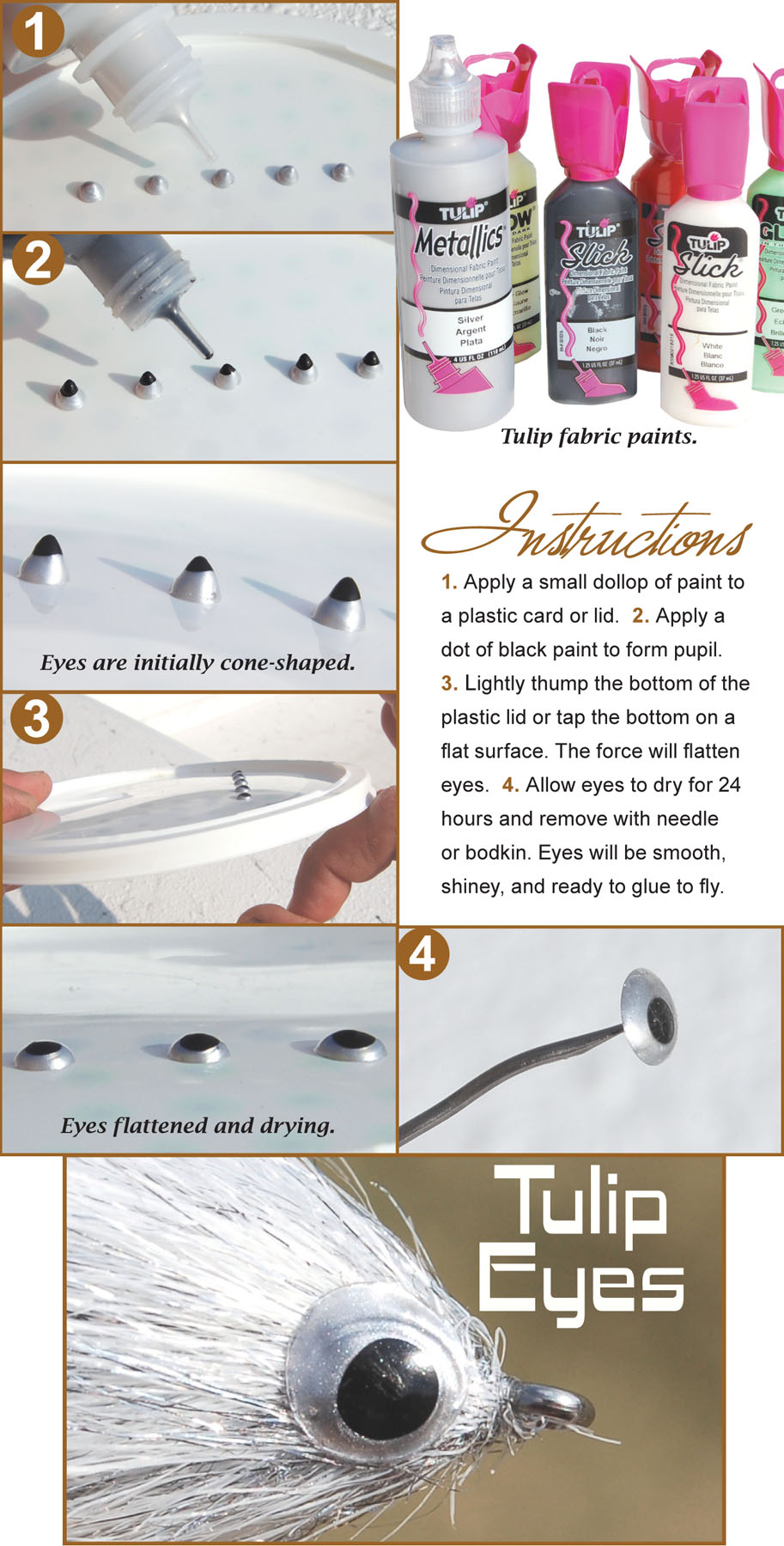 A prominent feature of many fly patterns is the eye. It is believed that predators spot and focus on eyes as targets for their attacks. Therefore, anglers have been outfitting their lures and flies with eyes for a very long time. The primary choice for making eyes on baitfish patterns used to be to just paint them one. Many tyers decorated their streamers with enamel by precisely positioning a drop of paint on the heads of the streamers with a dowel or a matchstick. It was a bit messy, and sometimes the paint would wick into the body materials and mess them up. Overall, though, it worked.

Then along came the stick-on eyes made from circular pieces of adhesive-backed Mylar punched from a large sheet. These eyes were far less messy than paints. Next, the 3-D stick-on eyes appeared. Their dimensional glassy appearance looked even better than the flat Mylar eyes.

The problem with all stick-on eyes is that they don't stay stuck on. The eyes must be glued in place. Unfortunately, the glue often fails and the eyes disappear, or the eyes bang against a hard object and crack loose. A coating of epoxy solves this problem, but who wants to coat all their flies with epoxy just to get the eyes to stay put? There is an alternative, though- Tulip eyes.

Tulip Dimensional Fabric Paints are water-based, nontoxic, paints that were originally designed to decorate clothing. They are packaged in a convenient plastic applicator bottle and are available in a mind-boggling assortment of colors and sheens. These paints are highly viscous, so they can be squirted into oddball shapes and designs. Tulip Fabric Paints can be used to make MOE Fly heads, shrimp backs, crab bodies, and an assortment of other fly body parts, but perhaps their most practical use is to make fly eyes.

Making the eyes is simple. Just squirt a few small dollops of paint onto a plastic lid, add a drop of black paint on top of the dollops to form the pupils, and then lightly tap the bottom of the lid to make the viscous paint flatten slightly. Let the eyes dry for 24-48 hours and then peel them off with a bodkin needle or a safety pin and glue them to your flies with superglue or DAP Kwik Seal. The eyes will have dimension and they will be tough and flexible. This means they have a good 3-D look and they can be formed around curves. Their flexibility also prevents them from cracking and falling off if they strike a hard object like a boat or a rock.