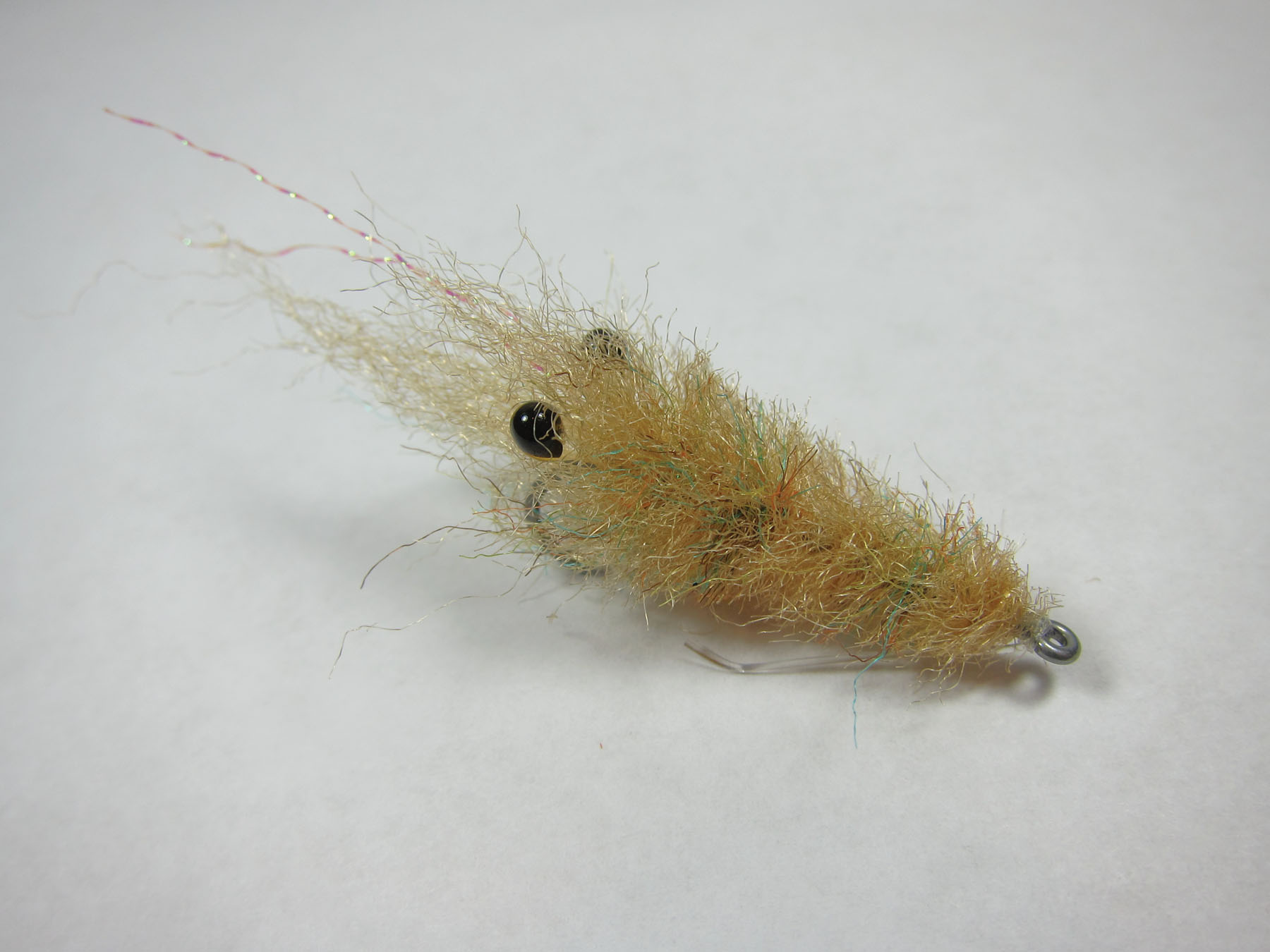 It has been a while since I have presented a fly tying pictorial here in Texas Saltwater Fishing Magazine, so this month I decided to show the tying steps for two fairly simple yet very productive flies- the Smartt's Shrimp, and the Chrome Minnow. These are two of my favorite patterns for inshore fishing and they are also patterns that top the list of "how-to" questions I receive from readers. These flies exhibit what I consider to be a good combination of form and function, and have evolved over many hours on the water and behind the vise. They are proven producers.

The Smartt's Shrimp is a small translucent shrimp-like fly that lands softly and has a very lifelike appearance in the water. It is weedless, durable, and a good choice for sight fishing in shallow water where shrimp and crabs are on the menu. This is my first pick for sight casting to shallow redfish, especially in the spring when they feed on small shrimp and crabs.

Step 1: Cut several short pieces of 60 lb. mono and burn the tips slightly with a lighter or candle to form a small ball on the end. Dip the ends in black nail polish and then a protective clear coat like Aleene's Fabric Fusion or epoxy. Make up a dozen or so at a time.

Step 2: Cut a 2-inch long piece of Mason Hard Mono and thread one end through the eye of the hook. Lash the end to the hook shank with thread wraps. Allow the tag end to stick forward- you'll come back to it later. Wind the thread back to the bend of the hook and attach two eyes by laying them side-by-side and lashing them tightly to the hook shank. Bend the bases of the eyes outward slightly and coat all thread wraps with Hard as Nails.

Step 3: Snip off a small tapered clump of tan EP fibers and lash them to the hook on top of the eyes. These fibers should extend slightly past the bend of the hook. Overlay two strands of brown or orange Krystal Flash to form the antennae. Coat the thread wraps with Sally Hansen's.

Step 4: On the tying table, lay out a 4-inch long column of evenly trimmed tan EP fibers. Then cut three smaller bundles of brown or olive EP fibers and lay them on top of the tan fibers as shown. These darker bundles will form a banded appearance in the finished fly. Note- the photo shows a dubbing spinner built from a bent coat hanger stuck in an egg sinker. You will need a similar spinner or a short length of wire with a hook bent in the end to spin the EP fibers in the following steps.

Step 5: Form a 4-inch long loop with the tying thread and bind it down at the base of the antennae. After you bind it down, wind the main thread up to the eye of the hook.

Step 6: Hook the spinner (bent wire) in the loop and then carefully pinch and stick the bundle of EP fibers between the legs of the loop. Pull down on the hook to tension the loop and spread the fibers out evenly. Then spin the hook in your fingers and the thread will wind tightly around the fibers. If needed, pick out the fibers with a piece of Velcro to untangle them and form a "pipe cleaner" appearance.

Step 8: Brush the fly with a Velcro or a small comb to puff out the body and untangle the fibers. Then trim the fly with sharp scissors to form an even taper that widens as it goes from the eye of the hook toward the bend. Take care not to accidentally trim off the weed guard or the antennae. You're done!

I began tying this fly about 10 years ago and called it a Chrome Clouser. It was basically a lead-eye Clouser Minnow built from bucktail and a single giant clump of silver Krystal Flash. The fly has morphed considerably over the years and many of the original materials (eyes, hook, bucktail) have been replaced. These days I just call the fly the Chrome Minnow. I use it for most of my non-flats fishing (surf, channels, guts, potholes), and also for much of my freshwater striper fishing. I have more confidence in the Chrome Minnow than any other fly in my box. It is a great fly.

Step 1: Make a small ball of thread wraps halfway between the base of the 60° bend and the point of the hook. Coat the wraps with Hard as Nails.

Step 2: Mount the eyes by making crossing thread wraps and then "gathering" wraps which go fully around the eyes, cinching the cross wraps tight. Coat the wraps with Hard as Nails and rotate the hook 180 degrees.

Step 3: Snip off a large full clump of silver Krystal Flash and pull slightly at either end to create a taper. Fold the clump in half and snip it clean at the bend, then tie it snug between the eye of the hook and the bead chain eyes. The tapered ends should extend well beyond the bend of the hook. When tying down the Krystal Flash, take care not to wrap the thread too close to the bead chain eyes.

Step 4a & 4b: Snip off a slender tapered clump of gray Fishair and tie it over the top of the Krystal Flash, binding it tightly at the nose to create a slight taper. Tie off the thread and coat the head liberally with Hard as Nails. You're done!

It can be difficult to describe the subtle steps and tricks in fly tying with a few written words and photographs, so if you have questions about how to tie or how to fish either of these patterns feel free to give me a call or send an e-mail. I'll be happy to help you however I can. As always, good luck with your fishing!