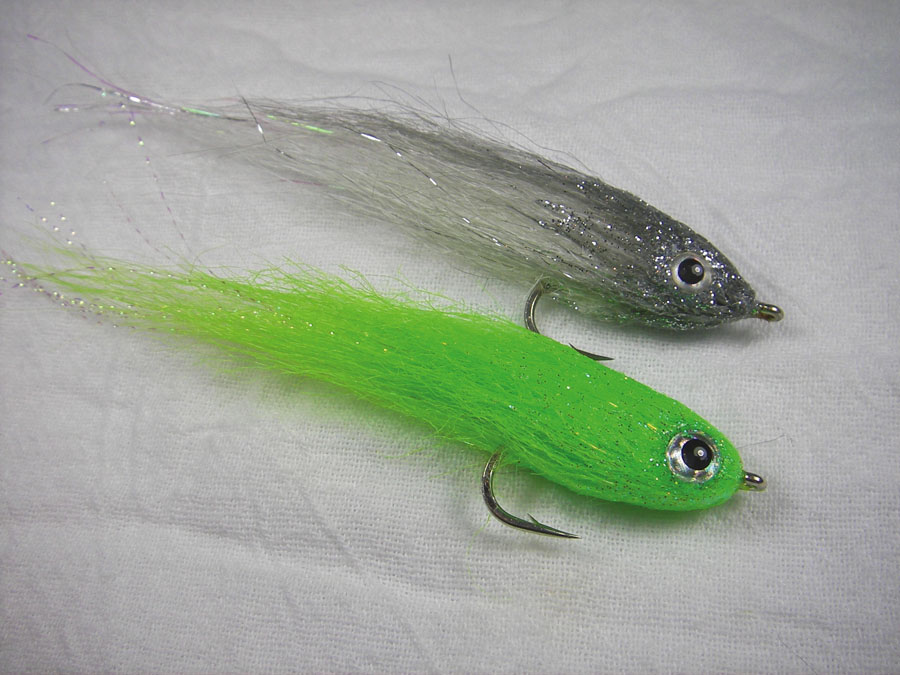 Deadhead minnows.
A few years ago, I began experimenting with techniques to create a large cigar-shaped baitfish pattern made from craft fur. The goal was to tie a round-bodied pattern that was neutrally buoyant something like a fly-version of a Corky lure. I could clearly visualize this fly in my mind, but had no idea how to make it.

After going through many evolutions in design and materials, I eventually learned to build the fly by dubbing a thick fuzzy craft fur body and then smoothing a fabric paint skin over the head. The fabric paint skin was a key feature. It made the head of the fly hold its hot dog shape and it provided a solid surface for gluing the eyes. The skin also allowed the fly to shed water easily making it light and accurate to cast. I called the finished fly the "Deadhead" and it has become one of my favorite flies for both fresh and saltwater.

The Deadhead is a great fly for tricking trout, especially when they are feeding around structure or staking out potholes. Under these conditions, the Deadhead should be paired with an intermediate line and a leader with a long fluorocarbon tippet. With this rig, the Deadhead can be virtually dead-drifted or fished with slow twitches and tugs that absolutely bring the fly to life. It is a great combination. For deeper water such as channel edges and drops, I couple the fly with a fast sinking line. Throwing this fly along on a fast sinking line along current swallowing edges during an outgoing tide is deadly. I have tied this fly in many different color combinations, but my favorites are solid chartreuse with pearl flash and pearl glitter paint, and grey/white with silver flash and silver glitter paint.

I have received many e-mails and phone calls from folks wanting to learn to tie this fly, which is the reason it is featured in this month's article. The methods used to tie the Deadhead are not complicated, but they are unconventional and there is a learning curve involved in learning to distribute the materials evenly around the hook shank. My best advice for tying this fly is to take your time when forming the dubbing loop and go as light as possible with the fabric paint skin. Don't get discouraged if the fly doesn't look right as you are tying it because it usually will come together in the end. Stick with it. It's a great pattern. Here are the materials and tying steps:

Step 3: Make a dubbing loop 5 inches long by looping the tying thread around your finger and back up to the hook shank. Wrap thread from the bobbin around the base of the loop to secure it and then wrap the tying thread on up to the eye of the hook. Place a dubbing twister/spinner (weighted wire hook) through the end of the loop you have made and let it hang at the rear of the hook.

Step 4: Cut a full, even, combed bunch of craft fur and lay it out flat on the tying table with the butt ends of the craft fur aligned. On top of the craft fur, spread out a small pinch of Ice Dub shredded flash material.

Step 5: Carefully pinch the craft fur/Ice dub mixture and insert it between the two strands of the dubbing loop (this takes practice). Gently spread the mixture over the length of the dubbing loop, taking care to keep the ends aligned.

Step 6: Pull down on the dubbing spinner and twist the loop until you feel it begin to shorten slightly. Don't over-twist the loop or you will break the thread. The materials will tangle around the loop as you twist it, so keep tension on the loop and pick them out with a small piece of Velcro hook pad.

Step 7: With the dubbing twister still hooked in the loop, wrap the loop slowly to the eye of the hook. Tie off the end of the loop with the tying thread just behind the eye of the hook and snip off the tag end. Pick the body out with Velcro hook material. The body should be full and fuzzy.

Step 8: Gently comb back the body fibers until they are smooth. The body should have a full round shape that tapers toward the tail.

Step 9: Run a small bead of Tulip Glitter fabric paint around the nose of the fly.

Step 10: Gently brush the glue rearward using a toothpick or small brush. The glue should not extend past the bend of the hook. Don't mash the glue into the head, just create a thin skin over the head.

Step 11: Place a large dollop of Tulip Glitter fabric paint on the back of a 3D eye and gently press the eye into the fly. The eye should nest in the paint to ensure a good glue bond. The fly will dry to the touch in an hour or two, but it is important to let it dry for 36 hours before soaking it.