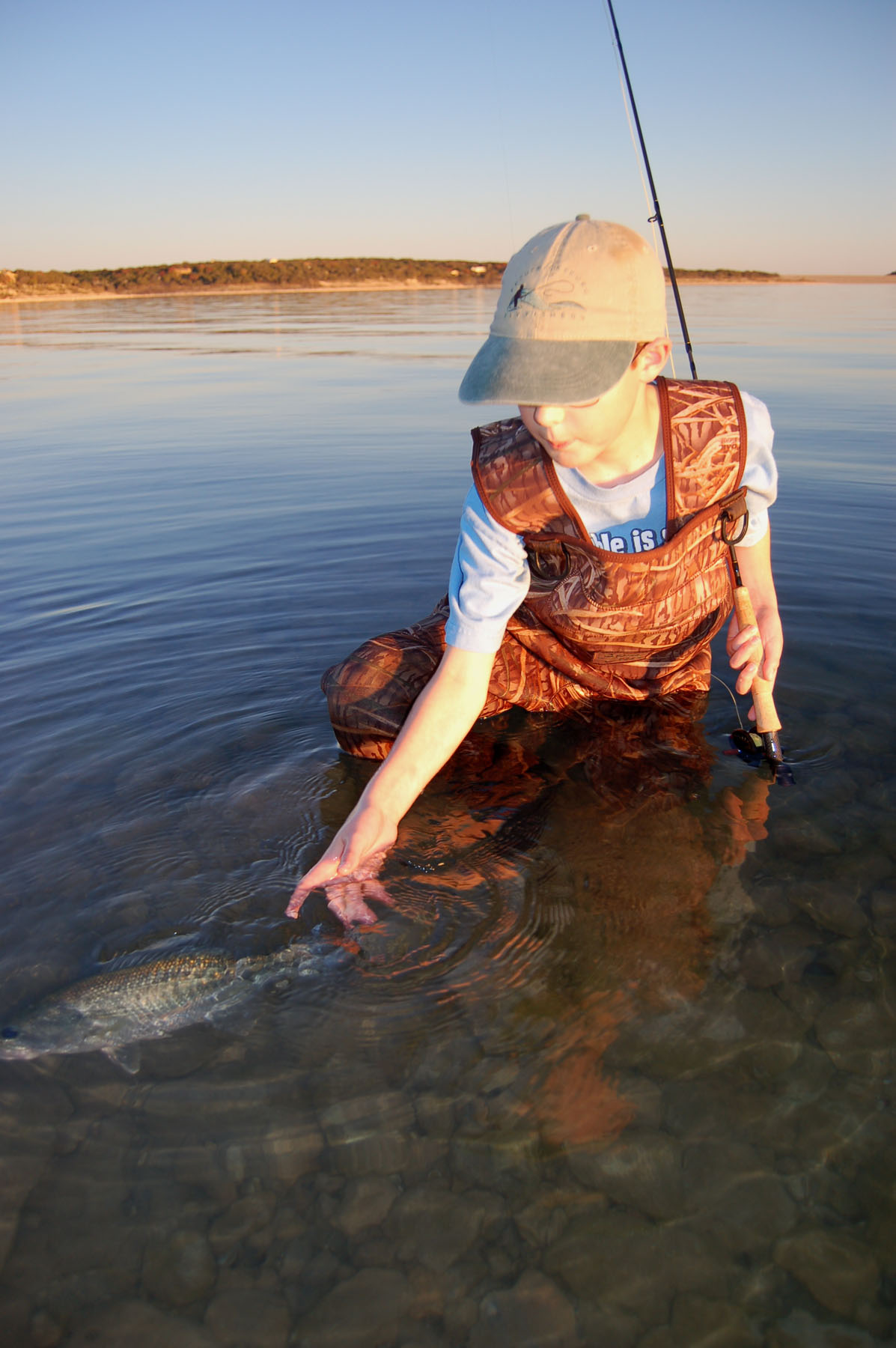 Rhodes Smartt, age 10, releases a fish that fell for a small chrome popper.

Very few things in saltwater fishing can compare with the excitement of a surface strike. The suspense and anticipation of a predator smashing a topwater pattern as it slowly chugs across smooth water is hard to beat. When it comes to surface patterns, fly anglers have many options available. There are flies that slide, skip, chug, dive, gurgle, and pop, and they come in all shapes and sizes. Success with these flies depends on selecting the right pattern and following through with a good hook set. Let's look at three styles of topwater patterns and match each to situations where they are highly effective.

Chuggers are the loudmouths of the topwater world. These flies are designed to make noise and get noticed- they scream, "Check me out I'm a big easy meal." Chuggers are most effective when fished over the water is deep, rough, or cloudy.

The first fly that comes to mind in this category is the Bob's Banger, originated by East Coast angler Bob Popovics. The cylindrical Banger is perhaps one of the noisiest and most boisterous flies you can stick on the end of your line (it's also one of the easiest patterns to tie). This is my favorite topwater pattern to throw in the surf. For its size, it casts well in the wind and it has the popping power and presence to overcome froth and crashing waves. The Banger is also a good choice when fishing over slightly choppy, deep, or cloudy water. To get the most out of a Banger, retrieve it with a series of sharp hard-as-you -can strips followed by a pause. The strike usually comes on the pause. My favorite colors in this pattern are chartreuse/white or red/white and I usually tie them big. Bangers tied on a 3/0 long shank hook are good to go.

Skipping bugs are frightened flies. While chuggers say, "I'm big and hurt," skipping bugs say, "Let's get the hell outta' here." Skipping bugs don't make much noise, but rather sort of plink and hop. The classic skipping bug is a large split-color red/white balsa pattern with a prominent eye and an upwardly angled lip. It is pelagic fly usually fished in situations where predators have corralled and pushed baitfish to the surface. This commonly occurs near jetties, passes, and nearshore waters. But there is another skipping option- the spoonfly.

In fact, my favorite skipping bug is a large flat spoonfly. Most spoons are designed to wiggle and wobble on a straight course. But, a big, flat spoonfly will ride toward the surface when you retrieve it. By using a hand-over-hand retrieve, you can get some marvelous results, making the spoon hop and sputter across the surface. If you stall your retrieve, the spoon will flutter down toward the bottom. That's when the strike occurs. You can use this technique nearly anywhere, but it is the most effective over broad waist-deep flats. I usually choose either a chrome/white spoon or a chartreuse spoon, and I tie them big. A 2-inch spoon tied on a long shank 3/0 hook is just right.

Poppers are similar to chuggers, but less aggressive. You can get all types of poppers in a variety of sizes and use them nearly anywhere. But perhaps the most exciting way to fish a popper is on the flats when sightcasting redfish. This requires a meek fly. Sort of a "little guy just minding his own business" fly. There are two reasons small is better on the flats. First, big loud poppers tend to spook reds in shallow water. Second, the sub terminal mouth of a redfish makes it difficult for him to get his lips around prey on the surface, especially when he is in shallow water. He has to either come over the top or smack from the side. Big flies, with big hooks, are simply hard for him to fully grab. Enter the small popper and small hook.

One of the best poppers I know of for shallow water reds is the tiny East Cut Popper. The East Cut Popper is scant like "eraser head" small. Because of its tiny size it lands lightly and makes just a little bitty blurp when plugged- well below the spook threshold. Although the East Cut Popper looks like it would be more at home catching bluegills than redfish, don't underestimate it. A redfish will hammer this fly. Two widely used color patterns are red/white and copper. Redfish will hammer these little flies.

A second good popper for sightcasting reds is the FH Popper tied by John Carpenter of Flatshunter Flys. The FH Popper is a small pencil popper with a glowing paint job. John uses a special inking technique and an epoxy coating to create deep, rich colors and plenty of shine on these flies. The FH Popper is easy to cast and subtle enough to present to nervous reds in shallow water. I've had good luck with his orange/black/red color combo.

No doubt surface strikes are exciting, but the very thing that makes up the thrill probably accounts for 90% of missed hooksets. It's called ANTICIPATION. As you watch your fly plug its way across the surface you are ready for something to happen. You can sense it a blasting strike is eminent. When the strike happens, you're on it. You give it a classic Roland Martin, "Son!" but pull the fly right out of the fish's mouth. Why? You're too quick on the draw.

Normally, when you feel a subsurface strike, the fish already has attacked and engulfed the lure. By the time you set the hook, he's got a dang good grip on it and you get a solid hookup. But when a fish attacks prey at the surface, he's got to grab it first (no small feat) and then he often has to swim away from meal-stealing buddies and bigger predators before he can engulf his meal. All this may only take a second or two, but that's a long time for an anxious angler to resist setting the hook. RESIST let the fish fully take the fly. If he misses it or spits it out, he may strike again or perhaps another fish nearby will seize the opportunity and strike. Either way you're better off if you can manage to hold back.

Topwaters are a thrilling side of saltwater fly fishing. Choose the right fly, make a good presentation, and follow through with a good hookset. It's all part of the challenge of angling and it will keep you coming back for more.