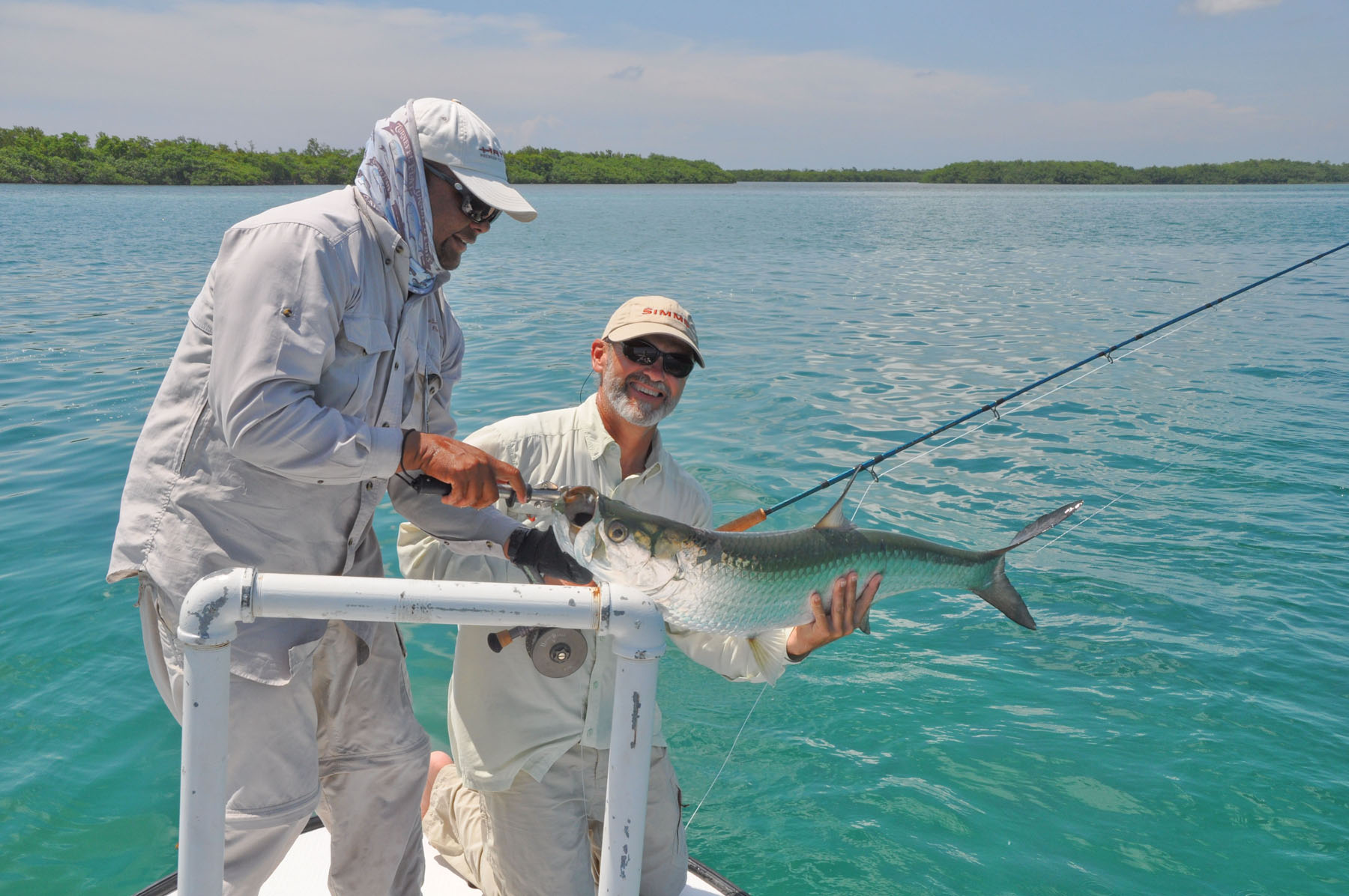 "There they are, 2 o'clock moving slow left. You see them, sir?"

The voice inside my head said, "You mean those 50 fins quivering above the surface attached to those 25 pound fish?" What came out of my mouth was "Got 'em."

The confidence was oozing. I've got these guys right where I want them headed into my 11 o'clock wheelhouse, wind gently blowing from behind my right shoulder. The ten-weight swung into action, the crab fly swished back and forth as I measured my line for the easy fifty foot cast. The crab sailed into the water just behind the lead fish, right where Daniel had instructed.

Welcome to the weird and wonderful world of fly fishing for permit. Had those been redfish on a Texas flat they would've beaten each other black and blue fighting over the faux crab. These permit were totally indifferent, or was that indignant? It was 7:30 AM and what followed was the most intense session of sight-casting I ever experienced, bar none. The school was calm and easy going as they meandered around the mangrove-lined cove inside the lagoon of Turneffe Island. My Belizean guide poled me into position over and over. Some casts were perfect, most were acceptable, a few were awful. I threw everything you're supposed to throw at permit as well as a few of my redfish flies. I threw to the lead fish, the ones in the middle, the single that broke away from the group to tail up on a coral head and still nothing but a single half-hearted bump. Many of them would tease with a quick turn towards the offering or maybe even follow it for a few feet, but none would commit. They tease just enough to keep you going. I have no idea where I heard this, but it kept playing in my head, "You don't fail until you quit." And as long as they were going to stay there I wasn't going to quit.

My wonderful wife sat patiently behind me offering words of encouragement and talking to those stubborn fish, "Come on, eat it, eat it, eat it." It wasn't until the school faded into a little deeper water and Daniel piped up with a suggestion to take a lunch break that I realized just how patient she was. I had lost all track of time and was dumbfounded when told it was after noon. Four and a half hours had passed in what seemed to be closer to an hour and a half. I hate permit. I love permit. I now fully understand the obsession so many anglers have with this species.

There were three of us at the lodge seriously chasing permit throughout the week. I ended up as the odd man out, but I had absolutely nothing to complain about. In addition to the ridiculous marathon morning, each day presented multiple legitimate shots at cruising or tailing fish. I just never found the one that wanted to eat my fly. There was, however, some solace in how my fellow anglers' weeks played out. Spencer caught his first-ever permit on his second cast and then proceeded to no-hit the rest of the week. Randy had cast to dozens without so much as a bump. While heading back to the lodge late in the afternoon of the final day his guide swung the skiff to a stop and pointed to a fast-moving school of five permit. Randy made the cast and got yet another refusal. The school was fading out of range when he loosed what was to be his final cast of the trip. Yep, you guessed it. He caught his permit. And no, I honestly did not make that up for your entertainment.

Turneffe Flats Lodge is known for their excellent permit fishing. In fact a permit is their logo, but they are by no means the only available targets. Huge schools of bonefish cruise and tail on the ankle deep flats just inside the barrier reef. Many of these schools easily held a hundred or more fish. Tarpon of all sizes can be seen rolling and slashing into bait in the passes and mangrove creeks that lead from the lagoon to the outer flats. And then there are the less glamorous species such as barracuda, mutton and cubera snapper, and an array of grouper. They may not grab the headlines but they'll certainly grab your topwater or well-placed fly. Camille and I elected to spend the majority of one day simply casting big topwaters against the mangroves to see what was there. Tarpon, snapper and more 'cudas than we really wanted all came out to play. The highlight of the day came in a quiet little creek when the rhythmic clicking of my dog-walking topwater was shattered by a huge boil and the gill-rattling leap of a five foot tarpon. The hooks didn't strike home, but it was still one of my favorite moments of the trip. The anticipation that any cast could bring a five pound snapper or a hundred pound tarpon made for a special day.

While that creek tarpon didn't come to hand, I did succeed in landing my first on the fly. The tide was rolling in through the major pass out in front of the lodge with the wind blowing the same direction as the current. The set up was perfect for casting as far as possible down-current and then retrieving with long steady strips back into the current. The moving water helped make the black over purple EP baitfish pattern come to life. Scattered tarpon were rolling and gulping in the vicinity adding to the feeling that something was going to happen at any moment. About midway through a long strip the line suddenly stopped with a jolt. The hookset was immediately answered with a crazy tail-walking 'poon.

Somehow I remembered to bow to the king on that initial jump. This has been my undoing on past encounters. Within seconds the loose fly line had flown from the deck and out through the guides along with a decent amount of backing. What followed was the dance of the tarpon fight. He runs hard left, you counter low and right; he reverses field and you respond. He dives for the coral heads and the guide starts yelling to give it more pressure. And then you see it coming, the fly line is rising quickly through the clear water. You drop the rod tip and bow while holding your breath and praying he doesn't throw your fly as he bolts skyward in a twisting turning leap. So many things can go wrong it sometimes seems impossible that such an insane fish can be landed with a buggy whip. On this day my hook stuck, my knots held and Daniel's grip upon the lower jaw of my prize was solid. He wasn't huge, but it was still a tarpon on the fly.

The following morning found us back in this same location just prior to sunrise. What happened next is one of those moments that burns itself into your memory. A long slow strip was met with a thump and miss. I paused to gather myself and the second I moved the fly it simply stopped. I mean it stopped like it was solidly hung on the bottom, but the bottom was swimming away. My heavy two-handed twelve-weight rod was bent into the cork and I honestly don't think this fish even knew he was hooked. It had struck coming towards the boat and continued on at a leisurely pace along the side of the skiff before making a wide lazy turn to head back down current. Daniel was steadily telling me to give him more pressure. I don't know how that could be possible. Every fiber of my being was fully involved. And then there was heartbreaking slack. I have no idea what creature of the sea swam away with my fly. Daniel was fairly confident that it was a very large tarpon based on its movements and his many years of working these waters. These are the moments that keep us coming back.

Turneffe Flats Lodge (www.tflats.com) is an awesome destination that I would recommend without reservation. It was the perfect place to get away from everything and celebrate 25 years of being married to my wonderful wife; no television, no e-mails and no cell phones. I'm truly a blessed man to have a lifetime fishing partner willing to sit without complaint for hours while I cast in futility and those damned permit.