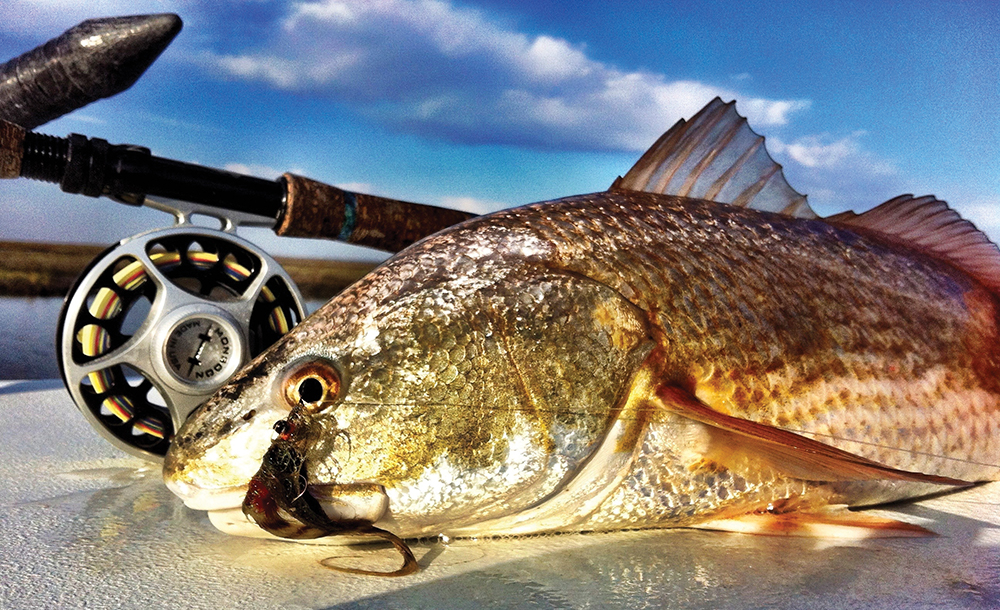 With the exit of Mr. Sommerlatte, our editor asked if I would mind taking on the fly department.  Since I have often strayed out of my lane and gone full-on fly with a few articles anyway, I’ll gladly take it on. So now I’ll be covering topics involving sightcasting, shallow water angling, fly fishing and conventional gear. All of these topics overlap anyway and I generally plan my day on the water about the same whether fly fishing or chunking lures. I hope to entertain and inform going forward as I have always tried to do on these pages for the past decade-plus. I really appreciate those of you who regularly read my ramblings and occasionally send a kind note regarding my work.

The sport of saltwater fly fishing has grown more than I ever envisioned. Way back in the 80s when I hooked my first redfish on a small popper, wading alongside Captain Terry Neal, fly fishing on the Texas coast was more of an oddity practiced by only a handful of guys. I had spent a good many years prior to that day slinging deer hair popping bugs to bass on my granddaddy’s ponds but had never done it in the salt. Camille and I were fishing with Terry and had caught a whole bunch of reds on gold spoons throughout the morning. It was one of those really easy days when every fish seemed to cooperate. As the trip drew to a close we spotted some tailing fish up against the spoils of the ICW.

At that time you could probably count the number of fly guides on one hand and I knew Terry was among them. Conversation during the trip had wandered into some fly fishing topics as I was curious about maybe trying it sometime. As we watched those happy fish tailing just beyond the reach of our best cast, Terry pulled out a fly rod and asked if I wanted to wade over and give them a try. Sure. It certainly wasn't pretty but I managed to plop that popper close enough to draw a crushing strike followed by a powerful run. Unfortunately, the red was not hooked as deeply as I was. Yeah, I trout set. Don’t do that. But the deed was done and I knew I wanted to figure this thing out.

Fast forward thirty or so years and here I am, still hooked on slinging a fly rod to all sorts of salty predators. All around me, fly fishing has grown and morphed into something I never imagined.  Back then it was mostly older guys with solid bank accounts who were involved in the sport.  Most ran bay boats and then waded to the fish. Throwing flies made you a bit of an oddity.

Those older well-off dudes are still involved, but the driving force has been a much younger crowd. Saltwater fly fishing is cool now. The equipment keeps getting better and more easily obtained. Twenty years ago there were damn few poling skiffs on the Texas coast. Now there are days when I see a dozen or more on the flats around Port O’Connor.

Redfish have always been the number one target of Texas fly fishermen and likely always will be. They’re the most visible and obtainable species, suited perfectly to fly fishing. However, with the growth and maturing of the fly fishing community has come a desire to chase other species.  Folks want to test their gear against bigger, meaner fish. Tarpon, jacks, kings, ling and even sharks fill the bill. Others want to test their skill trying to fool the more finicky species to eat their fly. Trophy-sized trout, sheepshead and black drum are all worthy targets available for sightcasting on the flats. When I first started out all I carried was a trusty 8-wt for redfish. Now I might have everything from a 6-wt to 12-wt on the boat so I can cover all my bases.

All of that brings me to this; there has never been a better time to be a beginner to this sport than right now. Hardly a week goes by that I don’t get at least one email or phone call from someone looking for advice on getting started. My number one piece of advice is always to find the closest fly shop and get to know the folks who work there. These days there are plenty of shops scattered around the state. I’m pretty familiar with most of them and would say I have yet to meet anyone in that business who wasn’t friendly and helpful. I count quite a few of these guys and gals as good friends who I would have never met were it not for fly fishing. They genuinely want you to be successful.

My second piece of advice is to get some lessons. Those same people working in the fly shops are usually pretty dang good casters who offer lessons. There are also several fly fishing clubs around the state with members who teach. I am a hardheaded self-taught caster. My swing isn’t pretty, but I can get the job done. I went through a lot of frustration in those early years that could have been avoided if I had just gotten a few lessons.

Guys show up to fish with me all the time with no real clue what they’re doing. They want me to teach them how to cast while out on the water. They would also like to catch some fish. That generally makes for a pretty tough day. Learning to cast requires time and practice. Learning how to present a fly to a fish also takes some time and practice. It makes a lot more sense to invest a little money and time off the water to at least get the fundamentals down before you book a trip. Stepping onto the bow with confidence in your cast will do wonders. Then I can teach you how to fly fish.

The added bonus to starting off with lessons is having the opportunity to try out different gear.  Rods vary greatly in speed and feel. If you take lessons at a good fly shop they can fit the rod to your stroke. Starting off with the right rod will save you money in the long run. I see it all the time on social media fly fishing groups, “What’s the best rod for me to buy?” Nobody can definitively answer that without knowing your casting stroke.

While you’re getting those lessons you can also pick their brain about the best reel, line, leader and flies for how you plan to fish. My fly fishing grew by leaps and bounds once I developed a relationship with the guys at my local shops in Houston. Chris Phillips, Andy Packmore, Ruben Garza, Cary Marcus, Marcos Enriquez, Mark Marmon and several others helped me immeasurably. And for that I owe them all a huge thank you.