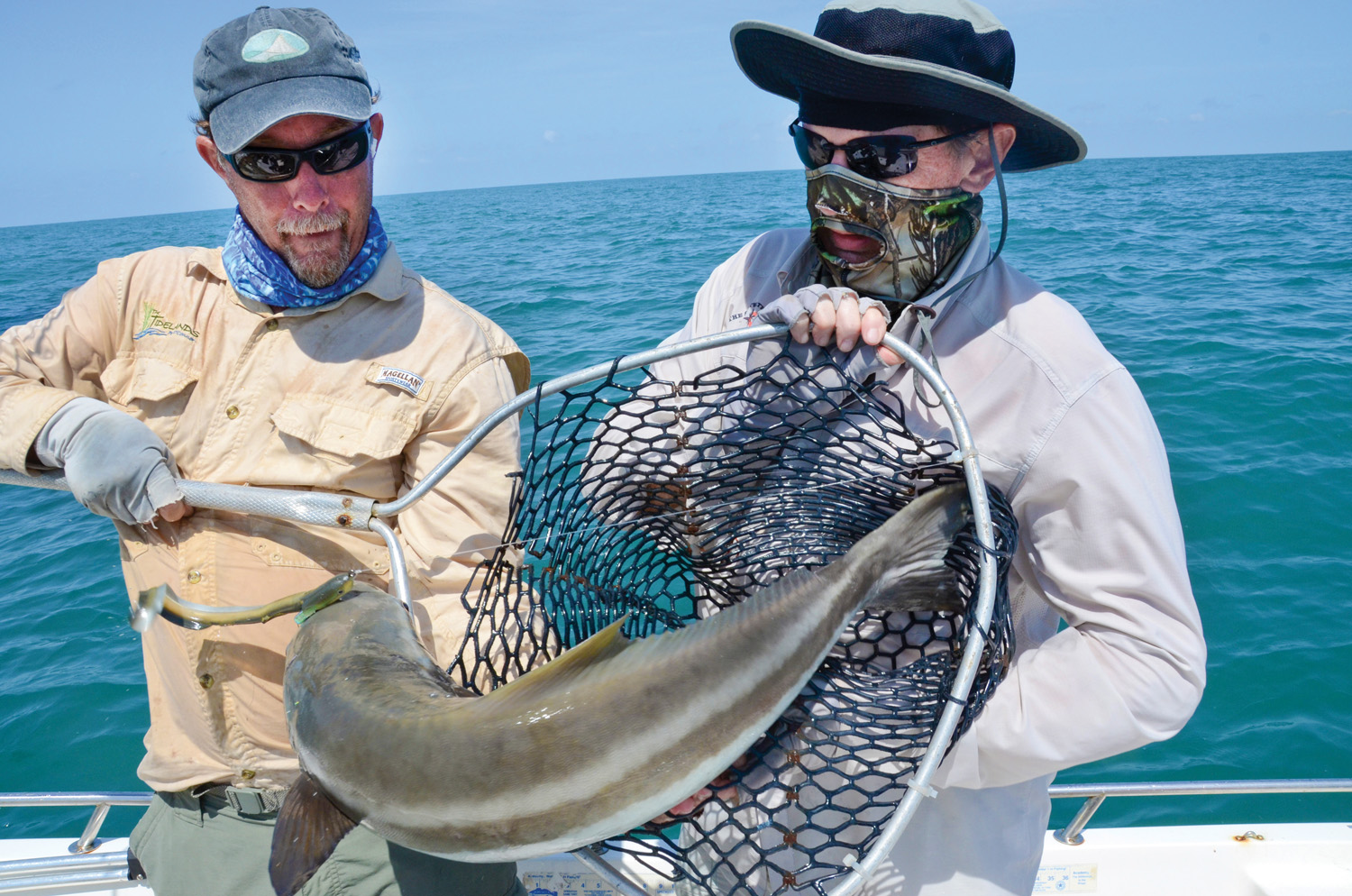 Author at left and Bruce Churton wrestle with an eel-caught ling off Port O’Connor. Photo by Pete Churton.

When April finally arrives I always think of ling arriving off the Texas coast. As a teenager, our local hero Ed Holder with the Port Arthur News once came in with 16 sizeable ling in April, and we young anglers never forgot it. His weren’t “maybe legal fish” by today’s standards; all weighed from 30 to 60 pounds. You see, early-season ling are big and hungry. I don’t pretend to know where they come from, but it’s like they’ve never seen a hook before. Back in the day, the schools of early-season ling we saw offshore would really bust up our tackle.

These days, I see most of my ling out of Port O’Connor, usually fishing with Capt. Curtiss Cash, who has an instinct for finding these fish. That area has a lot of potential for ling with buoys offshore, a color change right off the beach, shrimpboats anchored within sight of land, and platforms in state waters that always seem to sit in water clear enough to spot ling. That’s where two summers ago we had a Go-Pro video moment when we had about 15 ling on the surface, milling around two of their cousins whom we’d hooked up. Those ling got excited and the water fairly boiled at point-blank range. Even an orangutan with a cane pole rig would have been instantly hooked up.

Big ling lurk out there, not very far offshore and big enough to win tournaments. Last year Curtiss was cruising a color change and thought he spotted a bull shark cruising along. Upon closer inspection, it proved to be a ponderous ling of a hundred pounds or more, amazing to see. Unfortunately it dove from sight and didn’t return. But that’s what I like about POC, the fish come in close.

Back in Port Arthur, we normally have to pass miles of murky water before hitting greener water (much less blue water) for ling. But, that area has more ling than anywhere off the Texas coast—I’m convinced of that. In that area we generally see a ling or two on virtually all of our summer trips. You can’t really expect that, further down the Texas coast. However, ling can show up anywhere off a Texas beach.

Port Aransas has seen some fine ling action in recent years, both at the jetty and state water platforms. At the jetties, boats anchor near the end on an incoming tide when the water is clear. I’m not sure what they were using for bait, but I watched them from the rocks and didn’t see any corks or balloons. Local Aransas kayaker Glenn Madden has racked up a steady toll of ling from his kayak, after launching on the beach south of the jetties. I’ve seen YouTubes of him subduing ling while his feet in waders are hanging in the water off his kayak. That’s a serious sport many of us aren’t cut out for, but a fine example of how an inexpensive (in this case, plastic) boat can put you on quality fish.

He knows that throwing jigs around the platforms is the most deadly method for finding ling. A one-ounce jig in state waters will find the bottom quickly enough, and working it back to the boat covers the water column. Keep in mind that ling can be found anywhere from the bottom to the surface—they’re not always on top and easily spotted. And they might be circling the platform, 30 yards away, but within casting distance. Madden also slow-trolls ribbonfish, the perfect bait to drag behind a slow kayak. Fresh-caught ribbons are premium baits, and they’re hand-caught at night around lit commercial docks near Aransas. (I caught a bunch of ribbons myself two summers ago after stopping at Moses Lake, a known ribbonfish hangout attached to Galveston Bay. We threw gold spoons and in an hour had maybe 15 ribbons laid gently on an ice bag, silver and shiny as new dimes, ready to go offshore. For making bait runs like that, a small jonboat works just fine).

Another top ling bait I’ve been impressed with is the 12-inch plastic eel. They’re probably not tough enough to handle a trophy ling on heavy tackle, but great for casting and enticing ling up to 30 or even 40 pounds. The plastic on these eels is very delicate around triggerfish, however. Let an eel sink too deep, and triggers will take numerous bites out of them. I’ve had a few eels chewed up that way, but also caught bonito, jack crevalle, a kingfish and numerous ling with them.There are no triggerfish around anchored shrimpboats, so try the eels there. Not sure why offshore fish like eels so much, but they slurp them down like spaghetti.

One thing to remember: Finding ling is generally a run-and-gun affair. Sitting in one or two spots all day just doesn’t work well with this fish. On the other hand if you visit a dozen spots, you’re far more likely to see them. Wearing quality polarized glasses helps immensely, as well. This was an issue with my biggest ling ever, weighing 80 pounds on marina scales. I couldn’t quite see this circling pod of ling late in the evening, but my buddy, (who collected fine sunglasses like fishing rods) was able to point out right where I should cast at the right moment. That fight could have lasted until past dark but the huge ling, like most, made one close pass near the boat to check us out. My buddy was an experienced gaffer and stuck it near the pectoral fin, a fatal hit, the easiest gaffing of a big ling I’ve ever seen. It required two of us to lift it into the boat, however. If he’d merely poked and alarmed the ling, the fight could have lasted another hour. When it’s gaff time with these fish, you have to make it count.