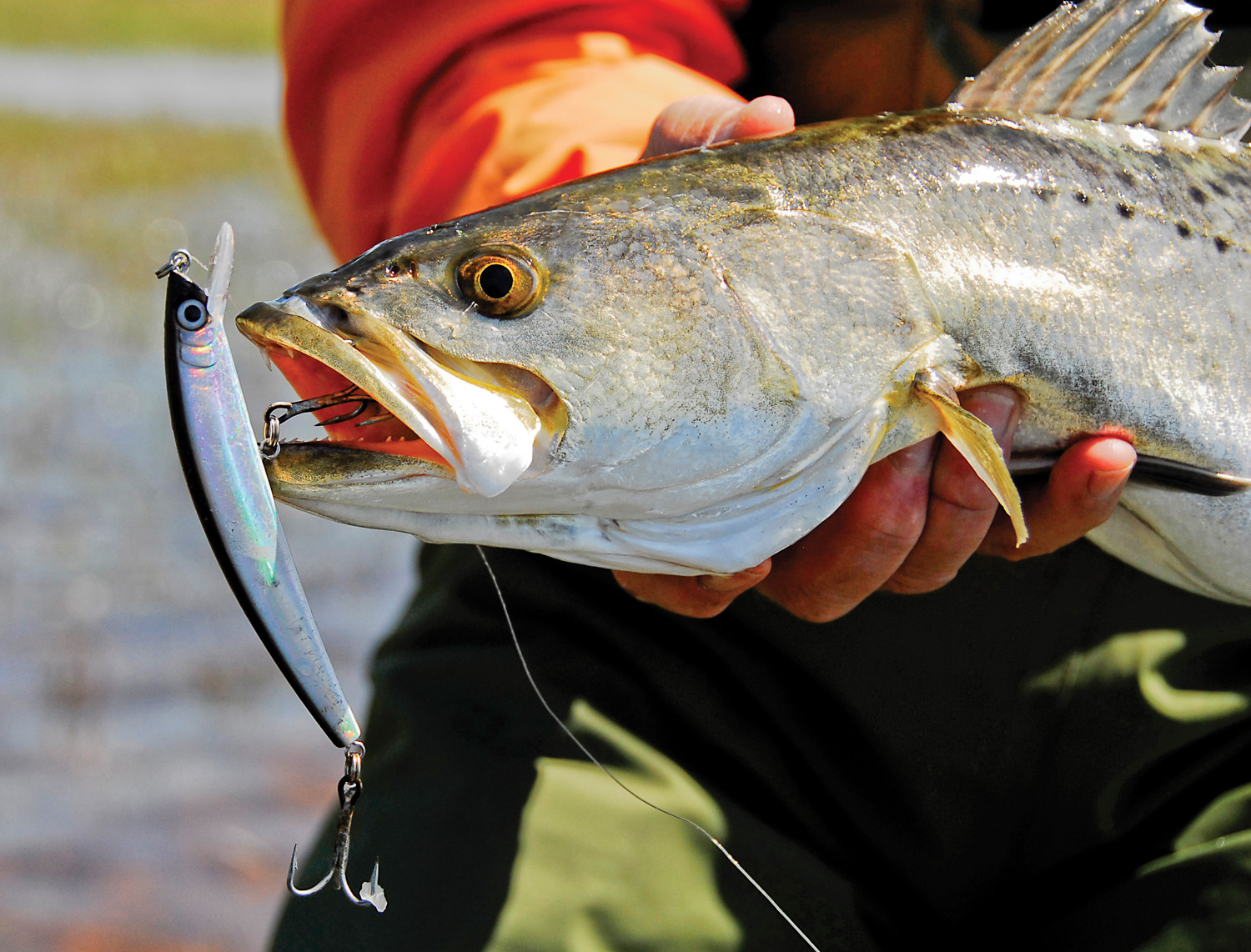 We all realize the biggest trout, including state records, are generally caught in February and March. But for big trout, I’ll take May any time. I don’t have the patience for wading all day in Baffin Bay, my lower back slowly growing stiff from cold water, casting for that one big fish. No, I’d rather catch a lot of trout up to seven pounds, and May is the month.

We used to walk the jetties a lot and I still do each summer. Up there we have a vantage point, sometimes eight feet above the water, and we’re close to the rocks where a parade of fish go by, something boaters can’t see. And in late May we’ve seen some impressive sow trout swimming by, attended by smaller male trout. Getting ready for spawning duties, or so we assumed. Our 3/4-ounce gold spoons hardly drew their attention; they seemed preoccupied. But in general we caught lots of trout without really targeting big ones. Back in the day we could only afford one sow-catcher MirrOlure each, and Spanish mackerel with their sharp teeth were a constant menace to our meager lure collection. We weren’t about to use wire leader, because trout don’t like it. Still, we boxed trout up to seven pounds on the spoons.

May is also a great time to hit the surf, slinging plugs on deserted beaches. Water temps aren’t that high yet, and an early morning session with a rising tide, throwing plugs, can yield a stringer of quality trout. These days we can afford a box full of plugs, but they’re at much risk in the surf, at least from mackerel. Jacks and the occasional tarpon can mean a stripped reel and lost plug, of course.

I still have pictures of a great day we had at San Luis Pass on Memorial Day Weekend. I was throwing a soft plastic of some sort and bouncing it on bottom. We were anchored in a jonboat near the bridge, in the shade on the bay side. The water was lime green with a slow incoming tide. I had the magic touch that day, which is nice, because I’ve seen it go the other way—where a boat anchored close by made us look like tourists. But on this day we must have anchored over a narrow gut about 12 feet below, and the trout were stacked in there. We strung 15 trout, all of them from three to five pounds. We had George, who was 78 years old, stand up in the boat with the heavy stringer for pictures. He was grinning from ear to ear. Around us, more and more boats crept closer, sometimes anchoring within 50 feet. Baits splashed all around us but drew no hits. We were heroes that day. Sometimes a blind hog finds an acorn, as we used to say in East Texas. We headed back to the ramp at noon with one more triumph for jonboats. I later heard George passed away in a coastal duck blind that November. His buddies thought he was napping and tried to wake him at shooting time but he was gone, just gone. (We should all be so lucky). I’m fairly certain we put George on his last good trout trip.

That happened in May, but it wasn’t our only good trout trip that month by any means. We’ve also cruised up and down the Matagorda Island surf, watching for jumping mullet and, after anchoring, bailing out of the boat to wadefish. That can get pretty dicey if the south wind cranks up, or swells arrive from a distant storm. If the Gulf remains flat, you can have 30 miles of calm beach with no prowling trucks. It’s hard to get potlicked out there: If a boat passes by when you’re on fish, simply keep the rod down, droop your shoulders and look bored.

Anyway, Houston Chronicle outdoor writer Joe Doggett recently agreed that May action at the jetties was the best he ever saw on the rocks:

Years ago we were anchored near the old lighthouse near the end of the Gulf side of Galveston’s south jetty. It was mid-afternoon on a weekday and conditions were "ice cream." We were free-shrimping at first, then ran out of live bait and caught several big trout on Bingo Flash plugs. It was the best session I can remember on quality fish. We only caught 25 or 30, but most were over five pounds. My cousin caught a 9-plus (largest I had ever seen). I caught an 8 1/2 (my best at the time) and we had five or six others in the 7-pound class. Several other boats nearby had similar fish. We spent the night in Galveston and went back early next morning and couldn't find a parking spot on the rocks! Word travels fast…That was my best big-fish day at the jetties, but we had many excellent spring/early summer trips. After we kept all those big spawners, I became increasingly supportive of trout limits and catch-and-release.

I would agree with Doggett, those big May trout are females laden with eggs, just quality fish. But they aren’t as tasty as smaller trout, because we’ve compared them before at fish fries. Even a sheepshead probably tastes better than a sow trout. These big trout are a prestigious fish, far more valuable than just two fillets in the freezer.