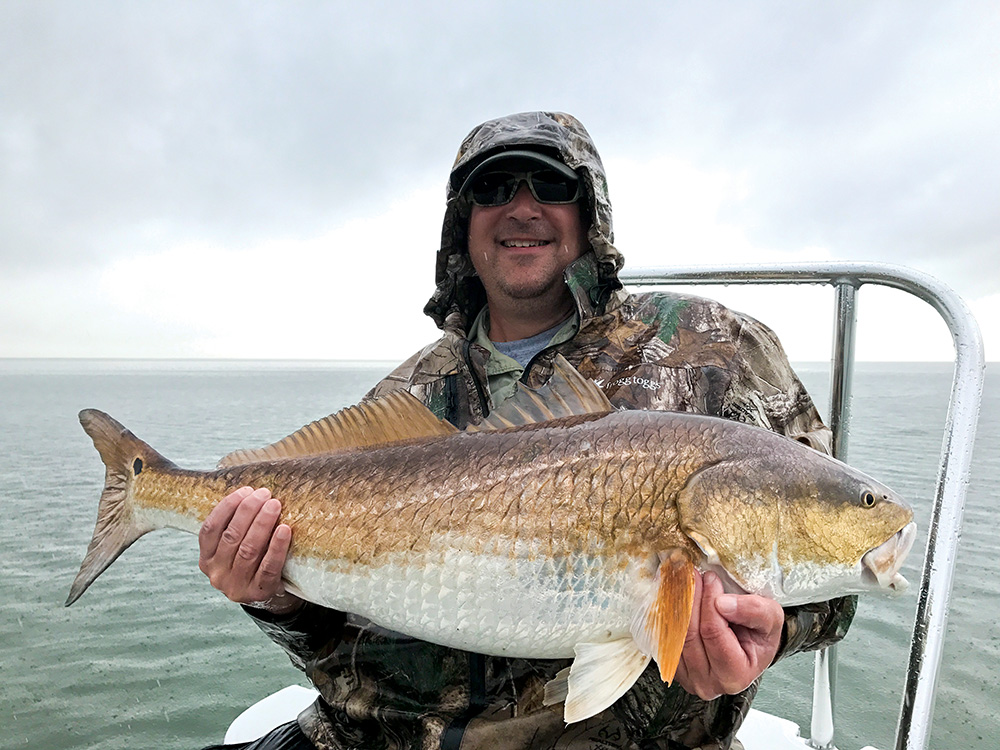 First impression might be that I used a fisheye lens but it’s just a really fat fish.

Sight fishing for big bull reds in shallow water is addicting. For several years now, I’ve been spending my winters in the Louisiana marsh chasing these huge fish. I took a break from it last year in order to finish up my house and make the move to Port O’Connor, but I found myself missing the thrill and satisfaction of putting customers on the biggest reds they’d ever caught.

Nobody seems to know for sure why these mature, oversized redfish venture into the shallow bays and marshes of Louisiana during winter. I’ve seen a handful do it in Texas, but nowhere near the numbers or consistency as our neighbors to the east. Given the areas where we find them, I suspect it has to do with the lack of barrier islands. Once redfish reach maturity at around thirty inches they generally leave the bays and live out their lives along the nearshore waters of the open Gulf. But unlike Texas, many areas of Louisiana have little more than a few sandbars to differentiate the open Gulf from the bays and marshes. Whatever the reason, I’m glad it happens.

So, on January 1, I packed up my gear and headed back to Cajun country for a two month stay. As evidenced by last month’s article, the first few weeks didn’t exactly go as planned. There was snow, there was ice, there was rain and there was wind. Not ideal for sight fishing, but I did get some fly boxes filled up while me and the dogs were stuck in the house. Once the weather broke, it was game on. I had rescheduled as many folks as possible from the weathered-out dates into my scheduled days off, so it was pretty much non-stop right up to the last day.

Following the ice storm, I ventured out on the water to do some scouting and found water temperatures varying a couple clicks either side of forty degrees. It was COLD. However, the bull reds really didn’t seem to mind. I was seeing plenty of fish and they appeared to be somewhat active. I don’t usually fish much when I’m scouting, but felt the need to see how these fish would react to flies and lures. The first one that saw a fly inhaled it and put up a spirited fight. The next experiment involved seeing if they would put forth an effort to chase something.Question answered when a big bruiser charged a gold spoon from several feet away. I was satisfied.

As the sun warmed things up a bit, the reds became even more active. While checking out a back lake I came upon a small school of five pushing through a few inches of water with their backs exposed. The Top Dog didn’t move more than a couple feet before they were fighting over who was going to eat it. A school of 15- to 20-pound redfish in less than a foot of water battling each other for your topwater plug will make you forget how cold it is in a hurry.

February wasn’t all sunny days and light winds by any means, but it was damn sure better than January. My customers soldiered on, grinding through the days of high winds, clouds and even a few rain storms. We caught plenty of fish under a variety of less than ideal conditions. But when things got right, it was incredible. There were several days of twenty-plus bulls anywhere from fifteen- to thirty-pounds with a sprinkling of fish beyond the thirty-pound mark thrown in.This is what pulls me back to Louisiana year after year.

If you would like to take a shot at this incredible fishery send me an email and I’ll put you on the list. Sometime around October I’ll get my dates set and send out an announcement that the calendar is open. Bookings are first come first served, and it fills up pretty fast with repeat customers who feel the same way about this place as I do.

In the meantime, I’ll be back home fishing the waters around Port O’Connor and Seadrift. I’m running two boats these days and can cover most any kind of fishing you’d like to try. I have the poling skiff for sneaking around in the shallow stuff, tossing flies or lures like I’ve done for years.And the addition of the Dargel 230 Kat has opened me up for wading trips as well as hitting the jetties or nearshore. Let me know what you have in mind and we’ll make it happen.