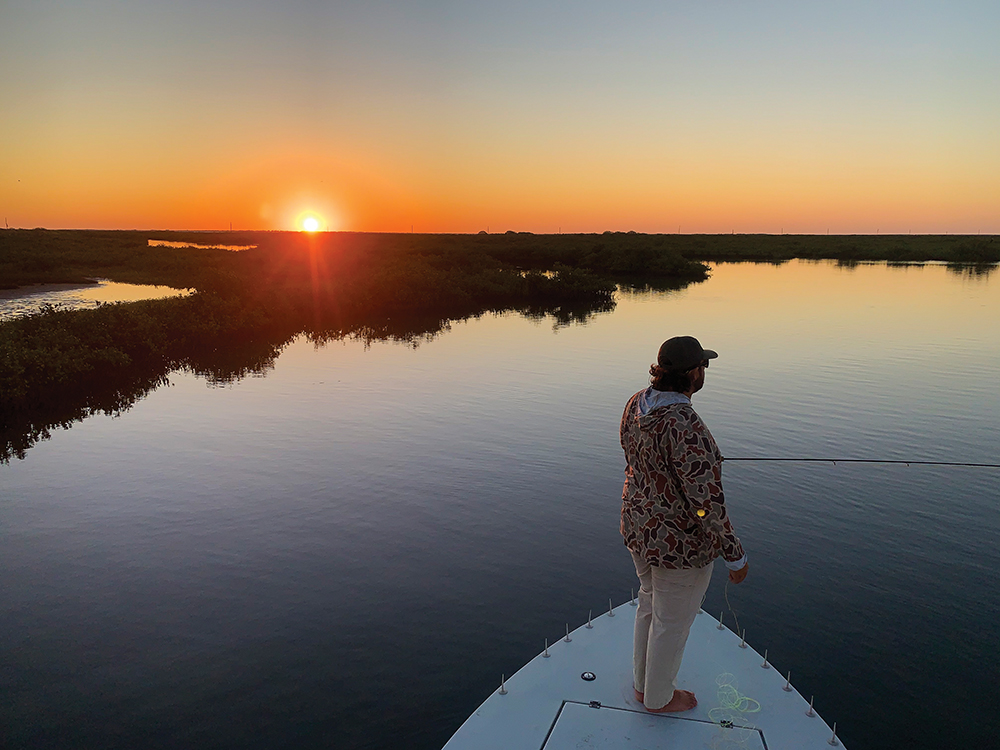 A common question I get from potential customers is, “What is the best time of year to sight cast reds in your area.” I’m sure my answer to “all of them” is met with some skepticism, but it really is the correct answer. It all depends on the conditions you’re presented with.

Many folks think that December, January and February would be too cold for the fish to get shallow. While that can be true during the most bitter fronts, the days between fronts can be outstanding. The calm winds and sunshine behind a front can allow the shallows to warm up fairly quickly. Darker mud or grass bottoms will warm faster than the sandy areas. As you go exploring different areas look for bait movement. If the mullet are moving, so are the gamefish.

Another advantage during the colder months is water clarity. Some of the clearest water you’ll see occurs during the winter months. While the lower coast enjoys clear water throughout the year, the middle coast can get a little cloudy during the warmer months. The higher tides of spring and fall get up into the mangroves and pull some silt out, causing the water along shorelines to be dirty. The typically lower tides this time of year allow that silt to settle. The colder water also tends to hold less algae and plankton, resulting in gin-clear flats.

Along the upper coast most people tend to think the water is dirty. I feel like it is just really rich in organic matter. The plankton and suspended algae lead to the “trout green” water of summer that makes most fishermen happy. While it is nice, it isn’t all that great for sight casting. Once the water temps drop into the lower 60s the organic matter drops out and the water can get extremely clear. Actually, the colder the better. When I was guiding the Galveston region I took many anglers into the marshes during January and February who would comment that they’d never seen that level of clarity on the upper coast.

Clear water is awesome, but it doesn’t do you any good if there aren’t any fish in the area.  Behind a front I’ll start my search near deeper water wherever I feel like the fish may have sought refuge from the cold. If the sun is out and warming the adjacent flats, the reds will creep out along the edges. If they aren’t on the actual flats I’ll start looking along the shoreline shelf of deeper bayous.

The longer the run of sunshine between fronts, the further the reds will venture from that deep water refuge. If it lasts more than three or four days with air temps into the 70s they’ll go all the way to the back of the marshes and shallow lakes as they would any other time of year. Again, if you are seeing baitfish moving about an area, then the water is warm enough for the reds.  Finding fish this time of year often involves covering a lot of water. I’ll be on the move, poling as many areas as possible until we can get on a pattern.

Once you find the fish you’ve got to get them to eat something. On the plus side, there is a lot less forage available to them during these months. On the minus side, the reds tend not to eat as much or as often with the slower metabolism of winter. The generally accepted thought among the trout guys in the winter is to go with bigger baits.

For redfish I go the other direction. I start fairly small and, if they seem to be refusing the offering, I’ll go smaller. For conventional gear I’ll go with the small DOA C.A.L. shad tail first and then move down to the new 2.75” DOA shrimp or a small Buggs jig. A 1/8 ounce gold spoon is also a good option. If you throw braid and tie directly you may want to consider adding a length of fluorocarbon leader.

This time of year is when fly fishermen often have an advantage over the conventional guys.  We can keep downsizing until they can’t refuse. I have worked my way down to size 8 bonefish flies when they really get picky. The other hurdle you are often facing is spooky fish. Clear water and light winds sometimes call for longer and lighter leaders than you’ve been throwing the rest of the year. There are no hard and fast rules, you just have to try and read the fish’s reactions to whatever you are presenting. Typically, if you run up on three or four reds that obviously refuse your fly or lure then it is time to change something.

And if all else fails you can always punt. This time of year is excellent for going exploring. The extra-low tides and clear water will reveal all sorts of interesting features that can be useful throughout the year. Back lakes and marshes often seem to be featureless bowls, but there is almost always a slightly deeper drain that winds around or through the pond. It is good info for later in the year when you spook a red off the shoreline. You can bet they know where that slightly deeper depression is and they’ll head towards it. Sometimes a cast into that area will get a reaction bite from the spooked fish. This can also be a good bet for blind casting while you hunt for a target.

Other structure features that I like to scout on the low-water days are reefs. You probably know where the reefs in your area are, but do you know exactly how they’re shaped? Learning the edges, points and depressions within a reef structure can pay off later when you can’t see them.  If you run across anything interesting, pull your phone out and take a picture to refer back later.

If you’ve always been one to blow off winter fishing in favor of waiting until spring, you might want to get out there and give it a shot.  The summer crowds are absent and the fish still have to eat.